Calculus is a crucible for many.

For David Wagner ’05, calculus class was where he stepped forward as a leader and mentor. His calculus teacher in Belleville, Illinois, Debbie Schmieg, took notice.

“‘I think you’d be a great teacher,’” he recalls her telling him. “That’s where it started.”

At Wabash the math major helped many fellow students by becoming a calculus tutor. He enjoyed the idea of supporting others.

“I know it’s a tough subject,” Wagner says, “but I felt confident and being able to support my peers was gratifying.”

He didn’t begin to think seriously about teaching until his senior year. An informational session by Jeremy Robinson ’04 on Teach For America sparked his interest.

After a study-abroad trip in Ecuador, he thought about teaching abroad. Robinson’s session opened his eyes to the impact he could make in the U.S. in places where resources are stretched thin. 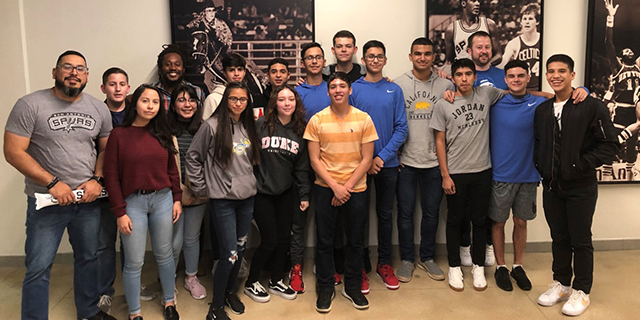 Wagner became an eighth-grade math teacher at Ringgold Middle School in Rio Grande City, Texas. It was exactly the experience he sought. Eye-opening and challenging, but through TFA he was meeting a need and given the opportunity to make an impact.

In 2007, Wagner moved to IDEA College Prep School in Donna, Texas, where he taught algebra, pre-calculus, and a variety of International Baccalaureate math classes.

“I learn from my students every day,” Wagner says. “Relationships are at the root of everything. It’s about the family and the connections you build. The trust in those relationships is essential.”

Wagner has had some success in establishing a pipeline from the Rio Grande Valley to Wabash. Over the past 16 years, dozens of students have matriculated north, and Wagner was honored as an Alumni Admissions Fellow in 2012.

At least six of those students returned to the Valley to teach after graduating from Wabash. Sid Vargas ’14 was part of that group. He was also a former student of Wagner’s at IDEA Donna.

In the classroom, Vargas describes Wagner as clear in his expectations, orderly, organized, and cool.

“He had a determination about him,” says Vargas, who taught sixth-grade math for five years. “He added a little drive for me because I wanted to make him proud. I wasn’t going to let him down.”

The IDEA schools have established a strong track record of success. One hundred percent of IDEA Donna’s graduating seniors have gained college acceptance for 14 consecutive years.

Now the principal at IDEA College Prep in North Mission, Texas, Wagner is trying to replicate that success on his campus. The young school is currently sixth–11th grades and will graduate its first class next year.“

Education is the great equalizer,” Wagner says. “We’re giving the 700-plus kids in the Mission area access to AP and IB courses—to more rigor—so they can be better prepared for postsecondary education.”

Despite the fact that he’s no longer in the classroom on a daily basis, Wagner still cherishes the relationships he’s made. He enjoys seeing former students drop by school to help, to lead field trips, and to assist with robotics competitions.

“I love the relationships I built in the classroom,” he says. “Now I’m able to see it come full circle as those students have gone to and graduated from college. They come back and give back to the kids in our classrooms. To see them modeling the lifelong learner mentality with a new generation of students is really cool to see.”