Coaches sometimes say the craziest things. But with one regular season game left, Ryan Nuppnau ’08 recalled the perfect description of the absurdity of the journey to that point and the optimism of what was still ahead.

“We had a long preseason,” says the North Montgomery girls’ basketball head coach. 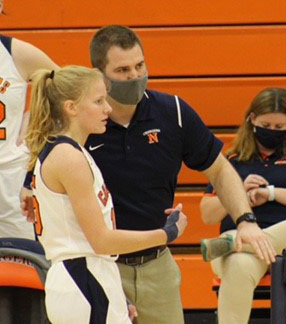 In a season where expectations were high in November, his Chargers battled injury, COVID-19, and illness constantly. Only one player, Madi Welch, was able to play in every game this season. While the team finished the season 5–14, Nuppnau only had a few days at the end of the season when they took the court with a fully healthy and complete roster.

Even though the struggles were constant all year, Nuppnau wouldn’t let the final score affect their goals.

Nuppnau was heartened by his team’s effort every day. The lack of wins wore on everyone, but the girls were never short on attitude and effort.“

It was tough for me as a coach, and if I felt this way, I know the girls were feeling the same thing,” he says. “We were trying to create positive habits in life that will transcend anything we do. They had come to work every day.”

Coaches often say losses can be beneficial. They lead to more teachable moments, restore the necessary balance, and fight overconfidence, but repeated losses can be deflating. So Nuppnau looked for great effort, even in single plays, to reinforce the positivity.

“Anything positive here and there keeps you going,” says the seventh-year head coach and mathematics teacher. “We were really trying to focus more on the individual in those moments. At that point, it had been mostly pieces and fragments.”

In one game, Welch broke the opposition’s full-court press single-handedly, taking the ball end-to-end. It was a moment he rewound and watched over and over with the team during film session. A small way to lift spirits in the moment.“

You can never do too much of that. Sometimes, I get so excited the girls just get annoyed,” he says with a laugh.

That approach connects with parents too.

“He’s a great role model in so many ways,” says Marc Welch ’99, associate dean of students, and Madi’s father. “He’s always professional, personable, and prepared. Ryan teaches the importance of perspective, being flexible and adaptable, especially in the face of the adversity the season presented. I appreciated his push for the girls to be the best version of themselves.”

Even with the uplifting moments, Nuppnau doesn’t lose sight of one key fact: Coaching isn’t his primary job. Teaching math is. The subject is notorious for repetition; for taking complex computations, breaking them down to basic skills, and mastering them through repeated practice.

“Those two things—the breakdown and repetition—are huge,” he says. “Similarly on the court, we’re creating a habit. To react and play, that’s the goal, and it comes through practice.”

Nuppnau enjoys the moments between classes, practices, and games when team members come by to say hello. Those are the moments he didn’t expect from the job, even though he knew he wanted to coach when he was a high school player roaming the halls in Valparaiso, Indiana. And fortunately, his college coach Mac Petty H’82, knew Nuppnau wanted to coach, too.

Petty heard there was an opening for an assistant coach at North Montgomery just prior to Nuppnau’s junior season and thought he’d be a good fit. According to Petty, Nuppnau was a good point guard and a savvy player whose knowledge of the game helped him a lot.

Nuppnau initially turned the job down to keep his focus on playing. Two weeks later he broke his foot and was out of action until January. The next fall, he jumped at the chance when he found out the position was still open.

“He’s an outstanding person and coaches that way,” says Petty. “He’s very interested in all aspects of his players’ lives. I’m proud of him and what he’s accomplished.”

Already in his young career, he’s learned a lot about coaching. He acknowledges this team has taught him a good deal.

“I appreciate their resilience and love for the game,” he says. “This was the most talented group I’ve had. There’s no other group of girls I would have wanted to go through this situation with. They are good with one another, care about one another, and want to see each other do well. They never gave up.”