Wabash Magazine Spring 2021: Leading On and Off the Field

National football league coaching legend Vince Lombardi famously declared that “leaders are made, they are not born.”

But former Wabash Football Coach Chris Creighton argues otherwise when talking about an alum who was an honorable mention All-American defensive lineman, was a finalist for National Coach of the Year, and now serves as an educator, coach, and councilman for the City of Westfield.

“Lombardi was only about 50 percent right,” Creighton says. “There are some people who come out of the womb with that innate trait, and Jake Gilbert has it.” 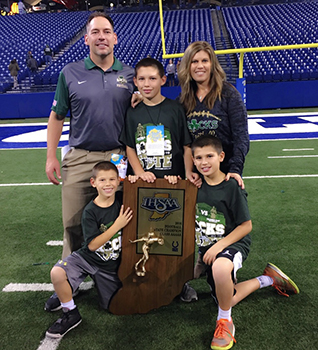 Jake Gilbert ’98 is the dean of wellness, connections, and growth, is the department head for physical education, and is in charge of the social emotional learning programs at Westfield High School. He joined the staff in 2011 and previously taught U.S. government and leadership classes at the school.

He was an assistant football and track coach for Wabash College from 2006 until 2010. Before that, he coached and taught U.S. government and economics at both Ben Davis and North Montgomery High Schools.

Today, Gilbert may be best known as the varsity football coach who led Westfield High School to an IHSAA state championship in 2016, but his legacy and the impact he leaves on his students and peers is much greater.

“We’re all different and just trying to be the best version of who we were created to be,” Creighton says. “People shouldn’t want to try to be Jake Gilbert—obviously—but anybody who knows or meets him can’t help but be inspired.”

Gilbert started playing football at an early age while growing up on the west side of Indianapolis, eventually playing at Ben Davis High School. He did not have a father to look up to or “much of a family,” but his head football coach, Dick Dullaghan, was a consistent male figure in his life.

“He made me feel like I was special,” Gilbert told Hamilton County Times. “I’ve just been very fortunate and blessed to have some great mentors in my life that filled in the gaps where I didn’t have family.”

As he grew older, Gilbert realized that he could be the same for others.

“That was profound in my development. I had the heart to do this way back when I was a student,” says Gilbert, who runs a similar program today, more than 20 years later, at Westfield.

The Freshmen Mentor Program is a bi-weekly program in which senior mentors facilitate growth in wellness and foster relationships with their younger peers. Throughout the year, students have the chance to explore their passions, goals, and purpose, as well as serve within the school to make a difference.

Ultimately, Gilbert says, the goal is to provide freshmen the support they need to transition well and make the most of their four years at the high school and beyond. 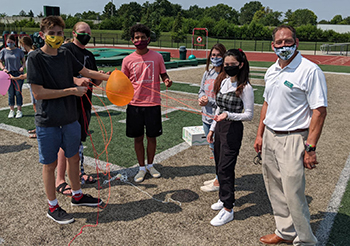 The relationships built within the program make Gilbert proud, and there are many stories that could be shared to show how successful it is. But one anecdote sticks out and demonstrates just how important mentorship can be to students experiencing adversity.

“We had a young lady who came to school after her brother survived a shooting over the weekend,” Gilbert says. “I went to check on her on Monday morning, and she just wanted to make sure I told her mentor what happened. That was her only request—that I tell her mentor.”

Gilbert serves as a mentor to his peers, too.

Josh Miracle ’11 works as the Westfield Shamrocks’ assistant football coach and teaches AP psychology at the high school. His relationship with Gilbert began his senior year at Wabash as the scout team quarterback.

“Playing for him, you could see that he genuinely cared about every guy,” Miracle recalls of the time when Gilbert served as the defensive coordinator for the Little Giants. “He always showed appreciation, whether it was for the scout team or starters—it didn’t matter. He treated everybody the same way, and worked hard to build the team up.”

Miracle was set to teach back in his hometown of Hobart, Indiana, after graduation, but plans changed for the student-athlete thanks to Gilbert.

“Around March, as I was getting ready to graduate, I called Jake and told him I was potentially interested in teaching there, and literally, within a day, he had the placement and everything set up for me,” says Miracle, who also serves as a member of Westfield’s wellness team alongside Gilbert.

“He was the one who believed in me and was determined to give me that opportunity,” Miracle says. “I couldn’t be more thankful."

Standardized test scores, graduation rates, and job placement can make it easy to gauge a student’s academic and career success. Measuring social and emotional wellness is not as simple, but it’s an area that Gilbert is most passionate about.

“We try to answer questions like ‘What about a kid’s coachability? What about their respect level? What about their grit and confidence?” Gilbert says, explaining that educators are intentional about growing those characteristics in students through the school’s mentorship program, extracurriculars and clubs, and one-on-one conversations, among other activities.

“We care about our students more deeply than the grades they get in math class or abilities they have as an athlete,” Gilbert says. “We do anything we can do to make sure our kids know we care for them and that we’re here for them, to encourage them to seek help when they are struggling with depression, stress, or anxiety, and push them to succeed.”

Gilbert is in his 10th season coaching the Shamrocks. He has led the team to three state final appearances and defeated Columbus East for the 5A title in 2016. He was named the Indiana Football Coaches Association’s Coach of the Year in 2013 and 2016 and was a finalist for National Coach of the Year award in 2017.

Most recently, Gilbert was chosen as the Midwest region’s winner of the American Football Coaches Association Power of Influence Award—the highest honor given to a high school coach. It recognizes coaches for their impact on their team, as well as the legacy they leave with the school and surrounding community.

While Gilbert is very proud of those competitive victories, he feels more fulfilled by the “enormous wins that the football team has accomplished together that will never make the media.”

And the list of those wins over the years is a long one.

“We host a Special Olympics clinic every year. We donate more blood than any team in Indiana. We started a teen suicide awareness walk at our school. We give back to Wounded Warriors, and have raised hundreds of dollars for cancer research. We started an equity council to have better conversations about diversity and equity and how we can be better teammates to each other.“

My purpose is loving and impacting kids,” Gilbert says. “I’m passionate about the game of football. I enjoy winning those games, but I am fulfilled deeper when we do the things off the field.”

“That mentality is authentic,” Creighton says. “Everyone has their own definition of what makes a great coach, but people think you’re either a ‘Sunday school teacher’ or you’re a ‘win at all costs.’ What people don’t understand is that you can be both.

“You can care about your guys, their whole development as a person, and also demand excellence on the field,” Creighton says. “It’s both at the same time, and Jake is an absolute perfect example of that. It was never really about the Xs and Os. He is more about leadership development in the program and discipline.”

Emeritus professor of English Tobey Herzog H’11 remembers having Gilbert as a senior.

“He brought a lot of the traits that he displayed on the football field into the classroom,” Herzog says. “He was responsible, always showing up every day on time, ready to participate in class. He was dedicated to learning and was always trying to improve.

“The fact that he doesn’t talk nearly as much about the wins he has as a football coach, but rather the importance and success of his students and mentorship, reflects his values. That’s the way he is. What you see and what you hear about Jake is who the real person is. And it’s impressive.”