When Brendon Cassidy ’94 was finishing up his final semester at Wabash, he stared in awe at the computer screen in front of him.

Were it not for his experience at Wabash, Cassidy doubts he’d be where he is today— on the leading edge of technology. After attending graduate school in Los Angeles, the music major and theater minor had stops with multiple high-profile companies including Disney and Universal Music Group. He and his business partner launched some of the first digital music subscriptions services and he helped build platforms for CBS and Yahoo Radio. Now, he’s experiencing success as the co-founder of a startup partnering with companies like iHeart Radio, Peloton, Universal, and others. 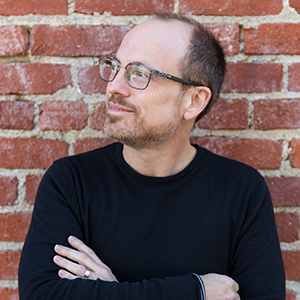 “My Wabash education gave me the ability to apply critical thinking, to organize and put thoughts together and communicate effectively, and to be able to speak in a room about things confidently,” he said. “Sometimes when I was in a classroom, I was with just a few other students and a professor. I had to be present, prepared, and communicate. I had to have command of the material that wasn’t just fact regurgitation. That's given me a tremendous advantage.”

After spending more than eight years developing services for companies like Cricket Wireless and Sony, Cassidy decided to begin his own venture. Five years ago, Super Hi-Fi was born.

There are plenty of services that provide great music listening experiences. But Cassidy noticed a gap.

“They didn’t think a lot about what it’s like to listen to the music,” he said. “There’s not much attention paid to what happens in between the songs, on top of the songs.”

Super Hi-Fi uses artificial intelligence to create transitions and crossfades between songs. It can also weave audio elements in between songs, like voiceovers and ads.

The goal? An AI that sounds like a DJ.

“We've trained AI to understand music like a DJ understands it, using digital signal processing and feature extraction,” Cassidy said. “We use that knowledge to create DJ-like listening experiences.”

Competitors in the digital music landscape often face similar challenges that traditional radio stations do — when so much is the same, what sets something apart? That’s where Cassidy believes Super Hi-Fi can make a difference.

“We are the evangelists for improving audio experiences and making them something that will drive loyalty, listenership, and increase the individual's happiness with their experience,” he said. “From that perspective, we're building out that vision and watching the industry catch up.”

Even as he launches a business in an ultra-competitive industry, Cassidy keeps going back to the tools he sharpened at Wabash nearly 20 years ago. They’ve served him well thus far, and he knows they’ll continue to do so.

“If I had gone to a conservatory, I would have just been doing music,” Cassidy said. “I wouldn't be taking classes on psychology, astronomy, and chemistry. Wabash was so incredibly valuable in not only giving me skills in the business world that I've been able to leverage, but also in increasing my enjoyment of life in the world. The skills, tools, and muscles that get built are ones that give you a much richer journey."