Nate Marshall: ‘We Owe it to Dr. King to be Honest’

Nate Marshall kicked off Wabash College’s Malcolm X Institute of Black Studies’ MLK Day virtual address by reciting, “why some people be mad at me sometimes,” a poem by African American poet Lucille Clifton. It reads,

After the reading, Marshall, a writer, rapper, and educator from the South Side of Chicago, went on to challenge the nearly 200 virtual attendees who joined him via Zoom on a day to commemorate the life and leadership of the Rev. Martin Luther King Jr. 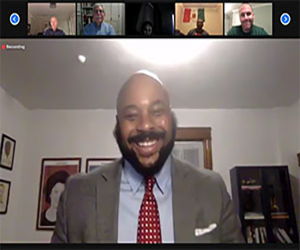 He wanted the audience to stop and think.

“This country has been complicit and, in fact, actively conspiratorial in the transformation of Dr. King into a cartoon, a character, a caricature of the ideas and ideals for which the flesh and blood man actually stood,” Marshall said. “We owe it to ourselves, to be honest about this awful fact. We owe it to ourselves to do what we can to ameliorate this grievous injury.

“Many of us don't like Dr. King. We just don't,” Marshall continued, as the virtual audience remained silent, some initially with expressions of confusion. “Many of us have never liked Dr. King.”

That confusion among the crowd began to diminish as the former visiting professor and assistant director of Wabash College’s Malcolm X Institute of Black Studies (MXIBS) continued to reflect.

“Many of us only think that we like Dr. King,” Marshall said, “and we think that because we have been so thoroughly miseducated or willfully thick in our incomplete readings that we have become the very embodiment of the poem by Clifton.

“We are those mad people. We are what my homies in Chicago would call ‘big mad.’ If we put a cape on and some tights, then we would be ‘super mad,’” he said. “We remember things that never happened, and demand unity under the delusion, which the poet Clifton quips about her diminutive verse.

“None of us are entirely exempt from this truth.”

Marshall continued in reflection and described who the civil rights leader was before his assassination on April 4, 1968, in Memphis, Tennessee.

“Dr. King was a socialistic radical with a deep distrust of virtually all elected officials of any color.”

“Dr. King was a nonprofit leader who felt such ambivalence about the notions of ownership in our society, specifically land ownership, that he refused to hold a deed to a home in his own name for his entire life.”

“Dr. King was a Black man with an arrest record that bloomed like spring flowers, who would have easily been killed on the street or in his own home by the police or their sympathizers with no charges filed, because his past criminality would be enough to convict him in the heart of a corrupt country.”

Marshall explained that a lot of us – referring not only to the audience, but the country overall – might not agree with all of Dr. King’s stances. And over our history, we have misused and twisted his words in order to “shame the very organizers who are, in fact, the true inheritors of MLK’s legacy.”

“We are complicit,” Marshall said, “of orchestrated ignorance.”

And the only way to break this ignorance, Marshall said, is to be honest with our history and ourselves.

“I think we owe it to Dr. King to be honest about who he was and to think through where we agree with him and where we diverge and why,” Marshall said. “Only through that kind of honest and rigorous thought-work and hard work can we hope to imagine a different possibility than where we currently sit.”