Once Colorado native David Riggs ’20 got to Wabash and found his footing on the soccer field, he began to “hunt for experiences.” He helped organize Lambda Chi Alpha’s 100th anniversary and helped establish Wabash’s own TEDx program. He started his own business and led the digital efforts of the Mental Health Concerns Committee. The financial economics major recently received an Orr Fellowship and says he’s “battle-tested, battle-ready to go out into the real world.” 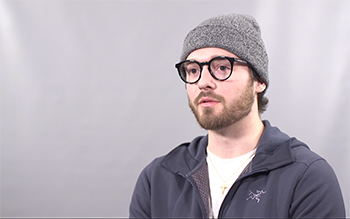 Q: Do you remember the moment you first felt like you belonged here at Wabash?

A: I’d say it was my freshman tutorial with Dean (Michael) Raters ’85. We were having a class discussion, and I don’t remember what I said, I just remember the response. I made a comment, looked at Dean Raters, and he nodded in approval. Here I was, just three weeks into college, getting the Dean of Students’ approval on a comment I made. I was just beside myself. I thought it was the coolest thing in the world. In that moment, I was reminded that I had something to bring to the table, much like everyone else in that class did.

That's remained true throughout my four years. Wabash reminds you that you do have something to say that’s worthwhile, but also teaches you how to say it. Whatever major you had, whatever minor you had, whatever GPA you had, if you can leave Wabash with that skill, you’re more prepared for the world than most people.

Q: In four words, how would you describe your Wabash experience?

A: Disciplined learning through experience.

Q: What do you mean by “disciplined?”

A: I’m a math guy—a numbers guy. In my room, I have a couple of whiteboards. Written on one of the boards is two equations: 1.01 raised to the 365th power and .99 raised to the 365th power. It’s a reminder that I can either get one percent better or one percent worse every day. If you get one percent better, every single day for an entire year, that 1.01 equation gets to about 37. The .99 equation gets to about .02. That the one-percent better mentality requires discipline. I’m not going to become perfect. No one becomes a success overnight. But I can get a lot closer over a year if I promise myself to get a little bit better every day.

Q: What do you enjoy most about learning—about the learning process, about discovering new things?

A: Learning gives you the power to start conversations with other people. If there’s someone I want to connect with, I should know exactly what he or she does. It’s learning to open doors for myself, to give me insight. There’s another thing written on my whiteboard at home that says, “Know enough to be dangerous.” It’s the idea that you don’t have to be a master in everything, but the consistent pursuit of learning these different areas, how they connect with each other, and understanding how the world works. I think that gives you a huge advantage.

Q: How has that learning turned into the experiences you mentioned in your four words earlier?

A: Freshman year, I was all about GPA and grades. That’s not a bad thing, but it wasn’t until sophomore year that I began hunting down experiences and trying to find ways to apply what I’ve learned. Even though my GPA did go down, I felt smarter and had real things to prove for this time I was putting in. I think that combination of education and experiences…it would be incredibly difficult to separate them, because without education, you have nothing to actually go experience. You don’t know what to experience. And if you just have experiences, you don’t have the other.

Q: Are those experiences what you’ll miss most about Wabash?

A: I could sit here for hours and list every single thing that I took part in, and I probably still wouldn’t do it justice. I’m immensely grateful for it all. I’m grateful the ways I learned to improve myself and the people who challenged me. All of the options, the experiences, the interactions that I’ve had…I would not be the same without them. 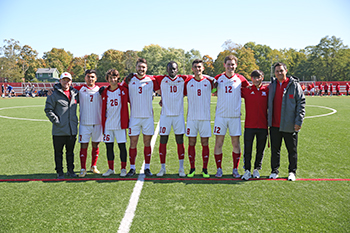 Wabash has become home. I have a house and the family is there, but we moved around a lot. It’s hard to pinpoint where home is sometimes. It’s where my family is, but a specific location? No. Wabash became that home for me. Leaving that is hard. It’s a little bittersweet, but it presents a whole new opportunity and a whole new set of challenges that Wabash College was able to prepare me for.