“When Life Gets in the Way”

As the College’s first female member of the Board of Trustees who recently established the Mothers’ Fund, Jennifer Evans is making history at Wabash. And she credits her introduction to the College as a personally transformative moment for her beliefs about educating young men.

But that introduction almost never happened in the first place.

When her son, Jack Montgomery ’15, was a high school student in Chicago looking for a small liberal arts college in the Midwest, they cracked open a Fiske Guide to Colleges and discovered Wabash. Neither of them had ever heard of the College.

But Jennifer’s husband certainly had.

It was 45 years ago when Jack Tankersley put on a Denison jersey and rode the bus from Granville, Ohio to line up against Wabash on the football field. He had no idea how lasting his initial impression of the College would be.

What does he remember about those games four decades ago? A surprising amount, actually. Who won, for instance (Denison, he remembers). The name of Wabash’s star running back (Mike Henry).

But most important, Jack remembers how Wabash played. “You remember the teams that played hard and fair. That was Wabash.”

It was this reputation that would bring him full circle back to Crawfordsville nearly five decades later. When Tankersley saw the younger Jack narrowing his list of schools to visit, he noticed a familiar name and spoke up. “I wanted Wabash on the list when it might not have been there otherwise,” he says.

And it’s a good thing he did.

After visiting the College for the first time, Jennifer knew instantly that she and her son had happened upon a special place.

“I read the Gentleman’s Rule, and I thought: there’s nothing I want more for my son than that,” Jennifer says. A successful banking executive, Evans earned her MBA from Northwestern and serves on several national and regional nonprofit boards. She was an immediate and passionate believer in the College’s mission. 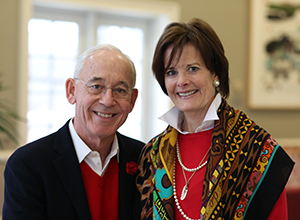 She loves to tell the story of how immediately the College made an impact on her son, Jack.

“When we came back for Jack’s first football game, we pulled up in the car with a few goodies and maybe a sweater of his, and Jack did something I’ll never forget: he offered to unload the car for me. I looked at him like he was someone else’s kid. He’d always been polite, but this was something more. It was courtesy, looking to take care of other people.”

He changed in other ways in those first weeks. “When Jack went to Wabash, we thought someone had started writing his emails and texts for him. We started getting this interesting prose, thoughts, and these well-crafted sentences. We could watch his mind start to engage with his environment.”

Tankersley, now a Denison trustee with an MBA from Dartmouth, saw something different in the College this time around, too. With 40 years of experience in venture capital investing, he saw the College making an incredible strategic offer.

“When I lecture about strategy in business,” he says, “I put up a slide about Wabash. This is a place that knows its value proposition. It says to parents: give us your raw material of a 17-year-old boy, and we’ll make you a promise that your son will think critically, act responsibly, lead effectively, and live humanely. Then Wabash delivers on that promise. There’s not a better trade in the universe.”

It was an easy decision for Jennifer and Jack to commit their energy to the College.

“We asked ourselves, how can we be impactful in ways that interest us? How can we make a giant impact? Engaging moms and Wabash women of all kinds was our idea,” Jennifer said.

Thus, the Mothers’ Fund was born, and Jennifer and Jack, who live in Denver, have started working toward growing its endowment for future generations of Wabash sons. When fully funded, this endowed fund will be allocated at the discretion of the Dean of Students in ways he or she deems worthy for improving the student experience.

Jennifer sums up the goals of the fund succinctly: “It’s for when life gets in the way—it’s a resource to help assist our students in less-traditional ways. The Dean of Students can say, ‘The Mothers’ Fund is looking out for you.’”

To hear Jennifer and Jack talk about the Fund is to feel the full force of their passion for the College.

“We want it to be a community effort,” says Jennifer. “Every Wabash man has a woman in his life. We think that this is a place for men to honor those women, and a place for women to honor the men in their lives too.”