Fall 2018: Warren Rosenberg: The Movie That Changed My Life 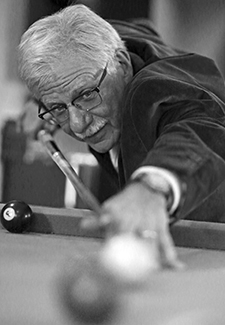 When I was four years old, my parents thought I was safely sleeping in the back of the car when they went to a drive-in in New Jersey in 1953 to see Vincent Price in The House of Wax. From my perch standing in the back seat, I was terrified, and of course mesmerized, as Price used actual corpses to make his wax figures so lifelike! Not a PG experience.

But the one film that was life-changing in a variety of ways was The Hustler, starring Paul Newman as a pool shark, and Jackie Gleason, Piper Laurie, and George C. Scott. I think I could label this one my “coming of age” film, as it came out the year I had my bar mitzvah.

Growing up in Brooklyn, I would go with my dad to various pool halls, to play and to watch games with some of the greatest players. I will never forget watching, from 10 feet away, Willie Mosconi taking on a pool room's best player. Our guy would go first, and run maybe 20 to 30 balls straight. And then Mosconi would chalk up and run out the game! Fifty straight, 75—he would not miss. I was in complete awe of this level of skill.

And so when the handsome Paul Newman walks into a pool room in this black and white film and hustles his first “mark,” I was completely taken in by this film.

But the movie is about so much more than pool, and I see now that it connected to experiences I had with my dad that defined me as a man. I won’t spoil things by rehashing the plot, but it is about competition, failure, skill, violence, gumption, friendship, and love—as Fast Eddie Felson [Newman] learns many painful life lessons. The performances, direction, and music are outstanding and led to a pretty excellent follow-up in Martin Scorsese’s The Color of Money (1986), with Newman reprising Fast Eddie, and Tom Cruise as the new young hustler. But that one will never replace the original for me. For one thing, it is in color. In my film imaginary, only black and white is real.