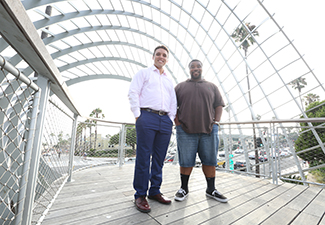 Filmmaker Devan Young looks for projects that speak to him. His friend, Ryan Lutz, wrote a story that not only spoke to Young, but kept him up at night.

Lutz had been the victim of mistaken identity. Two addicts approached him, thinking a drug dealer was living in his house. Lutz denied their claim, a struggle broke out, and Lutz found himself staring at the point of an ice pick. Lutz did not share those details with anyone until he wrote the story in Professor Eric Freeze’s creative nonfiction class at Wabash.

When Young read it, he was blown away.

“First thing I did was text Ryan, ‘Are you okay?’” Young says. “I lost sleep that night. I kept asking myself, Would I have survived that situation?”

Lutz had moved on. The story had been written. Eventually it was workshopped, rewritten, and published. Further edits earned it a place in Bull: Men’s Fiction.

But months later, the story remained raw and powerful for Young.

When the two friends returned to their home state of California after Commencement, Young talked Lutz into turning his story into a screenplay.

Their writing sessions began in September 2013 and stretched until the Spring 2015. As much as he believed in the project, Young worried about his friend. Were his questions—What did the men look like, smell like? How big was the ice pick?—forcing Lutz constantly to re-live the trauma?

“I love Ryan like a brother,” Young says, “but I kept wondering, Am I making him re-live one of the worst moments of his life? Am I hurting my best friend?”

“There were times when we just could not do this again and again and again,” says Lutz. “I finally hit a point where I believed enough in the story, and in Devan as a filmmaker, and it was time to go for it.”

The duo produced a 12-page script. The shoot took four days in San Francisco. Final running time for Corn was 14:36.

For Young, completion marked a personal justification. The night he discovered Ryan’s story was the night he decided to pursue filmmaking. His course was set.

“I read this story five years ago, before I knew anything about filmmaking, screenwriting, or directing,” says Young, who also teaches and coaches wrestling in Chino Hills. “When I saw the final product, that was proof to me that I could do anything I put my mind to.”

For Lutz, seeing Corn was surreal.

“I felt a really weird swirl of emotions,” says Lutz. “It was painful and it took a lot of guts to make that film because we were so green when we started. To have that creative energy with anyone is a powerful and a poignant thing.”

Devan Young’s short film, Frames, was screened at the 2018 The Houston Black Film Festival and the Gentleman Jack “Reel to Real” Festival in Dallas.