“ARE YOU READY FOR YOUR CLOSE-UP?” 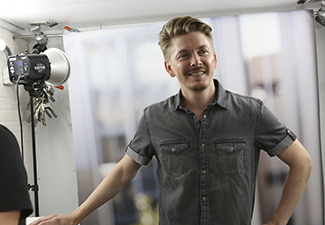 That bold white print above the orange type on the pink delivery truck-turned-mobile-photo studio makes The Headshot Truck hard to miss, especially in the palm tree-lined neighborhood where it’s parked for today’s appointments.

“If you’re going to invite people to have their picture taken in a truck with no windows, it had better be an inviting, not scary, color,” says Brian Confer ’01, The Headshot Truck’s co-founder and director of sales and strategy.

A 20-something man in a navy blue business suit steps out of the truck, his 10-minute “You’re the Boss” photo session completed.

It’s like stepping into a light box. With music playing. The makeup artist welcomes us, then calmly begins to work on Confer, who introduces us to the photographer.

“Finding someone who can bring out the best in our clients is the most important factor we look for in our photographers. We’re fun, we’re irreverent, we’ll turn up the music—we want to bring out the personality.”

The shutter clicks and Confer glances at the monitor, subtly changing his expression. His acting career may be behind him, but he’s still comfortable in front of the camera. The photographer quietly encourages every pose.

“Actors all loved us the moment we started,” says Confer. “People said it was ‘the most LA thing to happen to LA.’ Traffic here is horrible, but with us you can wait for the truck to come to your area. And as the industry changed and headshots became photographs that represented you in real life in various ways, our bold way of bringing out your personality inexpensively was something actors liked.”

Yet, Confer says, to grow the business, it had to become more “corporate focused.”

“LinkedIn was growing, social selling. Everything became about profile photos. If you understand how to bring out the personality of an actor, you can do it for corporate."

While the truck works in LA, in other cities the “headshot truck” is a cart carrying all that’s needed to set up a mini-studio at a business. The company is in Atlanta and New York and is growing into other cities.

That expansion is crucial if the company is to reach its potential.

“Entrepreneurship is crazy,” Confer says as we wrap up the photo session and step out of the truck, and an actress steps in. “We cashed out my 401k and I sold my own house to start this business. I would never suggest anyone do that, but I’m crazy, right? It’s jumping off a cliff and building an airplane on the way down.”

Confer seems suited for the risk and the long hours.

“I was more of a success as an actor when I was a kid, auditioning for big-budget films. My dad was a 1960s ad executive on the East Coast, one of the original Mad Men. If I wanted something, I had to pay for it. So I was the kid selling candy bars, finding golf balls in the woods and selling them at the tee box, playing pool for money. I was a little hustler.

“I was always into the marketing side of things, and I loved performing. It’s a rush, kind of like what I get from entrepreneurship. You are exposed, open, doing something you can’t hide from.

“Acting—being able to put on different characters—is always great. I do it when I’m pitching this company to investors. I love being on, being present.

“This is my favorite role—where I am in life. I’m loving it.”