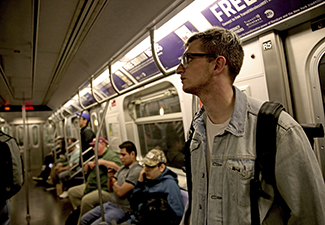 Ryan Cairns ’17 just needed actors for the first short film he was making in New York City. He was working with a friend, Quinn Cavin ’19, who was studying at a New York arts program and gave him reels from three women in his class for the female character.

One of them was Destry Allen. Cairns thought she was the best for the film.

She just happened to be Steven Spielberg’s daughter.

“At first it was really exciting, but then I got really nervous. Not about my ability to direct; I told myself that she agreed to do this for free, so she can’t expect a Spielberg production. But I was nervous about the script.”

Walking toward the Garment District in New York, a mini tripod for his iPhone in his backpack, Cairns says he doesn’t want to work his way up the traditional “ladder.” Instead, he wants to follow in the footsteps of his favorite filmmakers, directors, and musicians, who worked with whatever “crappy equipment” they had and continually put stuff out there.

So for this short film Cairns wrote what he knew and, as he says, it was a very 22-year-old script.

“But she loved it and thought it was hilarious. And then I was nervous about her dad seeing it. But I’m not even sure if she’s watched it all the way through yet!”