When I heard this issue of the magazine was about fashion, I was surprised they even asked me to write. 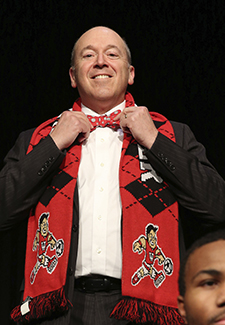 I am not known for my sense of style. My bold fashion statement? Cotton matches cotton.

But I do love movies.

I lean toward documentaries these days, and mostly on the small screen, but I remember well the first two movies I saw: The Sound of Music and Born Free. I recall the vibrancy of both films, the thrill of watching panoramic opening scenes in the Bavarian Alps and on the savannah of Kenya. I’ll admit it: I’ve been on the Sound of Music Tour in Salzburg, Austria. Twice. Lora and I will make it to Africa… eventually.

I still enjoy stepping into the theater, lights down, popcorn in hand, ready to be transported into other lives and other worlds. There are some movies you just have to see in the theater.

But the two films that left the strongest impression on my youth were Willy Wonka and the Chocolate Factory and Midnight Cowboy.

I’m not surprised that two such different films would move me. I was about 10 years old at a friend’s birthday party when I first saw Willie Wonka at the Stonestown Theater in San Francisco. It was funny, scary, exciting, and incredibly imaginative—I was completely taken in. Midnight Cowboy was almost the opposite—a realistic and gritty depiction of late 1960s New York City. I first saw that film when I was about the age of our students at Commencement, when they take their own hopes and imaginations into the gritty and sometimes harsh reality of the world. It’s a world where “yes, you can” meets “no, you can’t.”

There is no better way to prepare for that collision than a liberal arts education, and, for young men, no better place to begin that transition than Wabash.

Devan Young ’13, a filmmaker and teacher in Los Angeles, says success is all about what you do “after they’ve told you no.” Actor A.J. Clark ’16 says it’s about how you respond after you’re told, “You’re not going to be a great actor,” and you learn to find “great moments.” Writer Cam Montgomery ’86 tells us, “You have to realize they’re not saying, ‘No, never.’ They are saying, ‘No, not now.’ You have to go to the next person, the next time, to find your ‘yes.’ You have to keep telling yourself, ‘All I need is one door to open, one person to say, yes.’”

Of course, Wabash can’t take all the credit for the resilience you hear in those men, but it is what we aim to instill and reinforce in them.

No one has a final “no” over you. You get to clear your own path.

But you cannot do that alone. At Wabash, you don’t have to. I tell students that, “In 10 or 20 years, I am not going to be here. In 20 or 30 years many of our current faculty will have retired. The ultimate gift we give you is each other.” They have to rely on each other to build connections, to help find those options and opportunities. They need to try to be there when a brother is staring into the well of despair, to turn his gaze outward and upward. With their deeper and shared perspective, they can remind one another that the gritty world isn’t here to wreck your dreams, but to fire your imagination; that good men will have their dark days, but also their great moments.

Life is never perfect like it often is in the movies. But with the perspective you gain and the friends you make at Wabash, it can be a little better.