It was a mad – yet carefully guided – dash out the gym doors of Hoover Elementary School.

Hank Horner ’18 was rushing one of the fifth grade basketball players he coached to the bathroom with the dreaded bloody nose.

As he helped his player clean up, he saw three other Wabash students walking down the hallway. He asked him what they were there for and found out they were helping with STEM-based after-school programming. 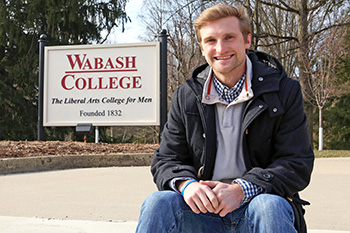 It was one of the proudest moments of Horner’s Wabash career.

As someone who grew up in Crawfordsville yet never really felt connected to the College, he takes that relationship personally. Coming in as a freshman, it was his goal to make that connection stronger and to inspire his Wabash brothers to do the same.

And he saw it come to fruition in the hallways of Hoover Elementary.

“‘Impact’ is a word that a lot of people my age throw around, especially at Wabash,” he said, “but they say they need to learn this or that first or wait until they finish their degree. You don’t have to wait to make an impact. Instead of trying to change the entire world, you can start by helping the person right in front of you. Because the world is just that - it’s people."

Horner came to Wabash to play basketball after an extremely successful career at Crawfordsville High School.

When he decided he didn’t want to play anymore after his freshman year, he wanted to find a way to still be productive with the time he was used to spending in the gym. That’s when his former P.E. teacher asked him to coach.

“I knew I would love that,” he said. “It’d be a fun way for me to stay involved with the sport and also have a chance to work with some of the younger kids in the community.”

He laughed when he admitted his players could definitely test his patience. There were times he struggled with how to best explain a concept to young players with different levels of experience. And there were also times when all his players wanted to do was talk or play tag. 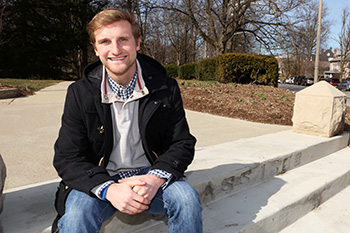 “But seeing how everybody progresses…” he said. “Like the one kid who comes in barely knowing how to dribble and can’t get the ball over the basket…when he finally scores, it makes it all worth it.”

Horner said that some might think it’s a stretch, but he believes his time as a fifth grade basketball coach will help him after graduation as he begins his job as an Operations Manager with Target in Indianapolis.

“I learned a lot about my own temperament. I also learned a lot about how you engage with one person versus another. I’ll be working with big teams of people where everybody is their own person. They’ll think differently. They’ll act differently under different circumstances. So that coaching experience will be a lot more transferable than I realized at first!”

While some of Horner’s volunteer opportunities kind of fell into his lap, others he created himself because he saw a need.

In his four years at Wabash, Horner has fundraised for hurricane relief for Texas and Puerto Rico through the Red Cross Foundation, has organized a now twice-annual student day of service for the Crawfordsville community, and has been an active volunteer with the Boys & Girls Club of Montgomery County, the Animal Welfare League, and the American Cancer Society’s “Real Men Wear Pink” fundraiser.

So it was no surprise to anyone (except him) when he was named the recipient of the Indiana College Career Center Consortium’s 2018 Paul W. Gabonay Volunteer Service Award, for exemplifying the qualities of integrity, commitment to serving those in need, and dedication to fostering the growth and gifts of others.

“I think people who have the means to help, should,” he said. “I don’t think life should be lived like a hermit. I want to go out and talk to people, get my hands dirty with people.” 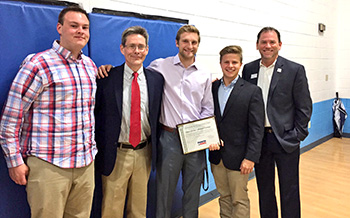 Horner is quick to admit that working to bring Wabash and Crawfordsville closer was not his idea – it was just his passion.

He’s seen a lot of progress in just the short time he’s been here, but, like any relationship, it will take continued efforts – from both sides.

“There are just a ton of really intelligent, really energetic, really influential people at Wabash who do a great job of inspiring other people,” he said. “I think there are a lot of opportunities for a person like that to get plugged into the community.