Why would someone want a job where “half the people hate you all the time”? What does it really mean to be an official in the National Football League? Coming off his first year as an umpire in the league, Steven Woods ’93 gives us a behind the scenes look in this Q&A.

We have so many questions we want to ask you, but we should probably start at the beginning. When did you begin officiating?

I always loved football, but when I was living in Dallas in 1999, someone asked me, “Have you ever thought about officiating?”

That question changed the course of my life.

When I met my wife, she was cool with it. As we had kids, they were all good with it. There were a lot of things that could have totally sidetracked this at any point. 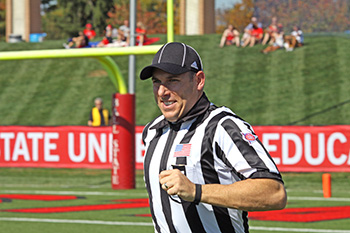 I’ve always wanted to go one step beyond. I started off doing Pop Warner games. When I was doing those little kids’ games, I’d think, it’d be so cool if I could just work on a Friday night. And I did that.

And then it was, if I could just work Division III. At that point, I was working Friday nights and Saturday afternoons, but I think competitive people are inherently uneasy with where they’re at and they always want more. As I kept going in Division III, I was thinking, if I could get into the Mid-American Conference, with the ultimate goal of being in the Big Ten. And then I made it there.

I kind of call that my “Hoosiers” moment, when the team measures the goal and it’s 10 feet just like their gym back in Hickory. It’s the same type of deal with the football field in any one of those situations. There’s always 100 yards of plain, and it’s the same 40 yards across.

That was when I realized, I could work on Sundays.

And then it actually happened…

I didn’t see this voicemail until 4 o’clock! So I call him back. I leave a voicemail. He calls me back another 10 minutes later. He said, ‘You’ve done a great job, and we’d like to bring you on with the NFL.’ And my heart is just beating out of my chest. I’m sitting down…absolutely speechless.

After I had accepted that this was not a dream, a kind of panic started. It’s like a dog who has chased this car but never thinks he’s going to catch it. When he finally has the car in its mouth, it’s like, ‘What do I do now?’ And that’s when that fear of failing came on.

How do you deal with that?

You’re constantly dealing with it. I’ve got such a healthy fear of failure that that drives me to not take things for granted.

You’ve got to prepare. And I don’t know if that’s good or not, but I think it keeps you honest. I think that when you start thinking you’ve got it figured out, life’s going to come in and punch you in the stomach.

You also have to deal with people yelling at you all the time. What’s the appeal in that?

(laughs) Half the people hate you all the time.

But my desire to stay involved in a game that I love supersedes all of that. You’ve got to have thick skin for it, but, more often than not, it’s funny when people say things.

I remember I was running up the tunnel at Ohio State to get on the bus. They were holding yellow ropes for us to run past the crowds, and as I’m running up the tunnel, I look over and I make eye contact with an older woman who was probably in her 60s. She puts both middle fingers up and yells ‘F*** you!’ And they had won by three touchdowns! And I just started smiling because it becomes sort of funny. 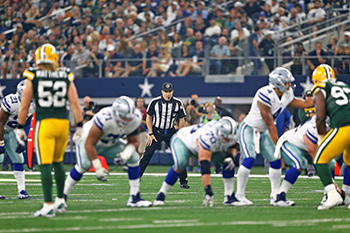 at it’s part of the spectacle of the game—being able to yell at us—and not thinking that we’re husbands, fathers, sons.

Before games I’ll hand out lapel pins with the NFL shield on them to little kids, because they look at us like the enemy too. I’ll come up and say, “I’ve got something for you.” They’ll start to take it, and I’ll grab it back and say, “You can’t yell at me!”

It’s the same joke, and I tell it at least three times in the same area, but they always think it’s funny.

What would you like people to know about officials?

How much work goes in behind the scenes. I think people assume that we’re just showing up.

We have tests. We have training films that they’ll publish on a weekly basis. We’ll watch film on the next two teams that we’re going to have. It’s a process.

So now, and I’m certainly not complaining because this opportunity is amazing, but I work [as a financial advisor] Monday through Friday. Then I’m up at 5 in the morning on Saturday to catch a 7 a.m. flight to wherever. If it’s a 1 p.m. game on Sunday, I’ll get back around midnight. In bed between 1 a.m. and 1:30 a.m., and my kids are up at 6 a.m. So it’s exhausting.

During the flights home, we get a thumb drive with the game on it, so I watch the plays I want to take another look at. By the time we get home, the regular game is already uploaded, so we can watch the game kind of in greater detail. And as I’m watching the film Monday after work, I’m making notes. Tuesday afternoon, we get our preliminary grades from our supervisor. They grade every single play, and you have to respond to all of that.

And then, on Wednesday, the final grades come out. Saturday rolls around, and you’re doing it again.

That’s a lot of extra work for someone who already has a full-time job, not to mention a family.

We’ve got to be the best team out there.

When we walk out on the field, everybody in the stands and on the sidelines expect us to be perfect and then get better as the game goes on.

Everybody makes mistakes, but we’ve got to get through them. If I don’t, I’m going to sit there and beat myself up, and I’ll have to quiet all that noise in my head because I have another play happening. I can’t take a play off. I can’t pout about something I messed up. Something I didn’t call and should have, or something I called and shouldn’t have.

So you really have to learn to deal with it quickly and move on.

Walk us through that first NFL game you officiated.

It was Monday Night Football, we were commemorating the anniversary of September 11, and it was the first regular season game.

It was a big deal.

All I kept hearing was, “The speed that you’ve seen up until now is nothing.” And the speed that I had seen was already faster than most college games. I had worked Michigan vs. Ohio State and other games like that with great athletes.

And these guys were bigger, stronger, faster. I remember thinking, I can’t mess this up. 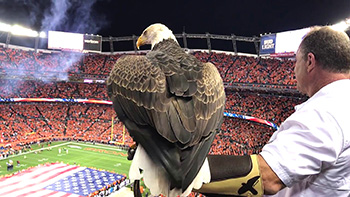 All of that was going through my head, and then the National Anthem started. There was a bald eagle with a wingspan of about 6 feet flying over. I just had goosebumps.

But once you get that first snap—and it was just like that when I played the game, I wanted to get that first hit out of the way—there’s kind of a calm that settles in with concentration. You’ve really got to maintain a very high level of concentration during these five to six second intervals. That doesn’t sound that difficult, but by the end of 200 plays, I was mentally exhausted.

But during timeouts, I found myself looking around and thinking, ‘I can’t believe I’m here.’