The two Wabash College seniors say it with a laugh though, knowing how much work they’ve put into the software they created.

Crawfordsville Mayor Todd Barton ’00 calls it an answer to on-going, detrimental problem for the city.

And it led to discovering $6.4 million in potential tax fraud. 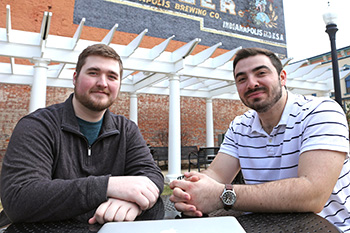 For years, the city of Crawfordsville has been losing property tax revenue due to fraudulent homestead exemptions* being claimed, but there was no easy way to figure out how much.

So Barton called the Center for Innovation, Business, and Entrepreneurship (CIBE) at Wabash College.

“To have the CIBE in our backyard is very valuable for us,” Barton said. “But it also gives students real-world, tangible experience. This is real stuff.”

Before Gellen and Morse entered the picture, a person had to manually click through a database of all of the addresses in Crawfordsville and compare the property owner’s name with the names listed on the utilities and voter records for that property to ensure they matched.

“Within five minutes of that first meeting,” Gellen said, “we were like, all right. We’re not sitting here for an entire semester and clicking into every address.”

After almost four years of classes where they were expected to approach problems differently and come up with original solutions, the two seniors said they “felt comfortable” doing the same for Crawfordsville.

So Morse, a Crawfordsville native, created a way to automate the process of looking through properties and their owners/occupants by designing a proprietary software that compares several databases at one time and flags potentially problematic properties.

Creating the program took the students about two-and-a-half months. But once it was in place, the data was processed in less than two-and-a-half hours.

“There was a hot minute in the second month where I didn’t know if we would figure this out,” Gellen admitted.

When the program was finalized and the final numbers computed – an assessed property value of $32 million in question, which equates to about $6.4 million in potential taxes – Gellen and Morse were confident that they had done everything right but were shocked at what they were seeing.

“I think we were pretty surprised in the number of repeat offenders,” Morse added. “People who own 10 plus properties who are cheating on all of them without getting caught for all these years.”

The next step was to deliver their final report to Mayor Barton. Despite confidence in their findings, the nerves on the trip to City Hall were definitely present. 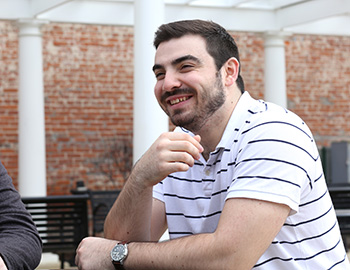 “We were 20, 21 at the time, and we were basically handing him a packet of paper that said he was owed more than $6 million!” Gellen said. “We may be young, but we understand the impact that can have on a community.”

Though his own previous research barely scratched the surface of the problem, it was enough for Barton to not be terribly shocked by the numbers Gellen and Morse generated. But he was amazed at how they did it.

“CIBE students take a different approach than we do,” he said. “I’m still old-school, looking at the county’s website and going down an entire street looking at every property. They create a system to do it, where you put the data in, and bingo you get a report!”

Barton explained that if Crawfordsville had this $6 million they had been losing in property taxes, the city probably wouldn’t have had to have recently passed a local option income tax for public safety.

“People are getting taxed more and more to make up for these people who are cheating,” Barton said.

Barton handed all of the information Gellen and Morse collected to the Montgomery County Auditor, whose office will take care of the investigations.

During this time, Gellen and Morse are taking what they accomplished and running with it.

“Before we wrote the report for Crawfordsville,” Morse said, “we came to the realization that this could be something we could repeat and monetize.”

The College released the intellectual property to the students, who now have a company based on their proprietary software: Synapse Data Analytics.

“I thought the only people starting companies in college were making T-shirts,” Morse laughed. “I wasn’t really thinking of rolling out a tax exemption software database to watch out for tax fraud.”

While it might be a bit frustrating knowing that it could be quite a long time before Crawfordsville sees the fruits of their efforts, Gellen and Morse both agree that they did their part, and they did it well. 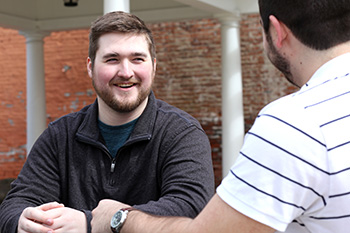 “I grew up here,” Morse said, “so I know just how tight the budget is and what the city could do with this much money.”

“I’m from California,” Gellen said, “but it feels good to give back to the community that has basically adopted me for the past four years.”

The seniors are currently updating their software to have it run at least annually for Crawfordsville and other communities they’re in communication with. They’re also discussing the possibility of implementing their program on a statewide level with the Indiana Department of Revenue.

“It’s intimidating,” Gellen said, “but we’re excited that there are leaders in Indiana who are excited about opportunities like this, where they can get more revenue without having to raise more taxes. It’s the win-win situation you always hope for.”

“But right now,” he laughed, “we’re just focusing on graduating.”

* A homestead exemption lowers property taxes for homeowners, but the individual/married couple is only allowed to claim an exemption for the property they reside in. Rental properties and other business properties are not eligible for this exemption.