No one at Wabash can remember the last time the College’s Theater Department staged William Shakespeare’s timeless comedy A Midsummer Night’s Dream, so director Michael Abbott decided it was time to dust off the enduring play and showcase a young ensemble cast framed by a handful of veterans.

“It just felt like it was time to do this play,” Abbott said. “There has been a changeover in our students; we’ve graduated a lot of very talented actors, and we wanted to introduce our new actors in a classic romantic comedy.”

The play follows four young lovers who flee the city for an enchanted forest and quickly find themselves entangled in a feud between the King and Queen of the Fairies.

“It’s a perfect construction,” Abbott said. “It’s basically three plays in one. If you like lovers, romance, intrigue, and mistaken identity, it’s got that. Then there is the fairy court, so if you like magic and spells, the 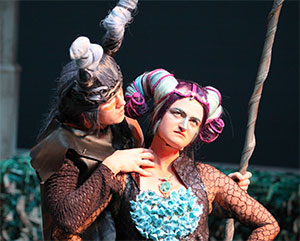 play has that. And then it has the Mechanicals, who provide slapstick comedy in a play-within-the-play.”

A Midsummer Night’s Dream was written in 1595, but is still a mainstay at all levels of theater. “The language is beautiful and the characters are genuinely funny,” Abbott said. It also speaks to people who know what it’s like to be in a relationship, to get older, and who question what love means.

Maloney, who plays Bottom in the hilarious gang of six actors known as the Mechanicals, said the play-within-a-play has been a challenge. “As an actor, I play Bottom, and as Bottom, I play Pyramus, so it’s important that I portray what Bottom thinks Pyramus is like. There are layers to unpack for yourself as an actor, then you have to repack and re-present the characters in a coherent way.”

When everyone heads for the forest and to Fairyland, beautifully designed by Bridgett Dreher and lit by Aaron Bowersox, mayhem ensues. Anderson’s Oberon makes liberal use of a love potion, which leads to burning passion and unrequited love.

The costumes, designed by Andrea Bear, are again over-the-top fantastic, especially those donned by Carlson and the 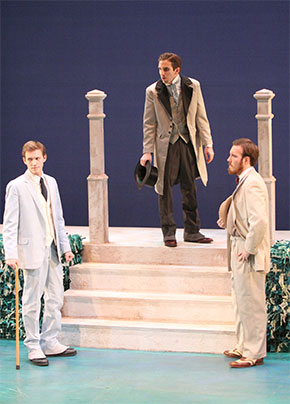 The play twists and turns, identities are mistaken, and love is found and lost again in a delightful comedy suited for audiences of all ages.

This week’s edition of the “Wabash On My Mind” podcast talks to “A Midsummer Night's Dream” director Michael Abbott and the Mechanicals, cast members Daniel Cuevas '21, Noah Janssen '20, Michael Lesch '21, Will Maloney '19, Nicholas Rodewald '21, and Taylor Starks '21. The group discusses a number of topics, including the lasting impact and comedy of this play, theater at Wabash, and what the audition process is like for a first-time cast member. Just click the red play button in the linkbelow to enjoy a vocal preview.