The Bachelor Is Best in Indiana

For the fourth time in the last nine years, Wabash College’s student newspaper, The Bachelor was named Newspaper of the Year by the Indiana Collegiate Press Association (ICPA). 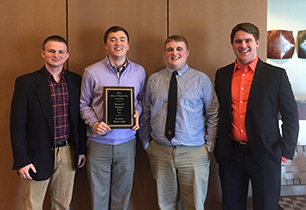 “It’s really great for our guys — and for Wabash — to be recognized and awarded the Division III Newspaper of the Year,” Editor-in-Chief Cole Crouch ‘17 said. “With a staff of over 30, many of whom are underclassmen, I am excited for this group and its leadership moving forward.”

Division III papers in ICPA include non-daily newspapers from campuses of less than 3,000 students. Student writers and editors for The Bachelor receive no formal courses in journalism, whereas other college journalists receive classroom opportunities and journalism programs associated with their newspapers.

“Other schools may have student newspapers, but Wabash’s is truly run by the students,” Wade said. “Students find the stories, take photos, lay out the paper, and hold each other accountable without faculty or staff having to look over their shoulders. That’s what makes this award that much more satisfying.”

The Bachelor finished with 52 points to edge out Goshen College with 46 points. Anderson University finished in third place with 29 points. DePauw University did not place.

In addition to the stories that were honored with awards, Reilly’s entry for Special Section Front/Cover “Portal to Hell?” from the 2016 issue of The Bastard received high remarks from a judge.

“I’m sure I don’t get 80% of the inside jokes here, but the April Fool’s section was still hilarious,” the judge said of the page. “But what makes this entry really great was the attention paid to the details. From the section flag name to the small promos at the bottom, no element was left unturned in the quest for humor. A well-designed and fun page.”