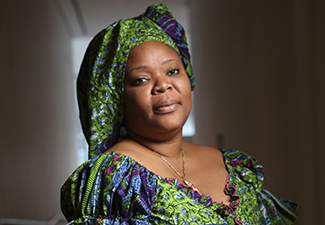 Leymah Gbowee, the 2011 Nobel Peace Prize winner, will present a lecture on “Crossing Borders to Find Common Ground” at Wabash College in Ball Theater, Fine Arts Center at 7:30 p.m. on Wednesday, March 15.  Sponsored by the Wabash College Pastoral Leadership Program, her talk is free and open to the public.

In 2003 Gbowee led a nonviolent movement of Christian and Muslim women to end the Second Liberian Civil War. "We were constantly trying to imagine strategies that would be effective,” Gbowee says. "The men in our society were really not taking a stance… We decided to do a sex strike to kind of propel these silent men into action.”

Gbowee is featured in the 2008 documentary film, “Pray the Devil Back to Hell” that portrayed the efforts to end Liberia’s devastating civil war. It was awarded the best documentary at that year’s Tribeca Film Festival.

Chronicled in her memoir, Mighty Be Our Powers, published in 2011, she is quoted in her book as saying, “When you move so quickly from innocence to a world of fear, pain and loss, it’s as if the flesh of your heart and mind gets cut away, piece by piece, like slices taken off a ham. Finally, there is nothing left but bone.”

Gbowee is a Liberian peace activist, trained social worker, and women’s rights advocate. She is founder and current president of the Gbowee Peace Foundation Africa. She was the founding head of the Liberian Reconciliation Initiative, and was the co-founder and former executive director of Women Peace and Security Network Africa. She is also a founding member and former Liberia Coordinator of Women in Peacebuilding Network/West Africa Network for Peacebuilding. Gbowee is currently a Distinguished Activist in Residence at Union Theological Seminary. She travels internationally to advocate for human rights and peace and security.

She has appeared on numerous television programs including CNN, BBC, and France24 and is the mother of six children.

The Pastoral Leadership Program is sponsored in part by Lilly Endowment Inc.