The numbers from Wabash's first-ever Day of Giving continue to overwhelm, as the College's loyal alumni, friends, staff, faculty, and students donated $465,421 in a single day – 19 and a half hours to be exact.

The $465,421 figure from the 430 on 4/30 campaign, of which 86 percent was allocated to the Annual Fund, was the largest single day of giving in school history and roughly one-eighth of the Fund’s goal for the year.

Most impressively, the average donation on 4/30 was $199.84 per gift and the College received an average of two gifts per minute over the course of the day. 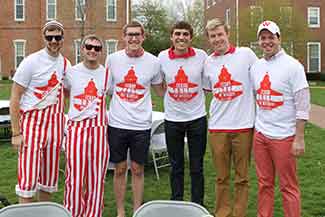 “There is no doubt that we had a lot of pieces in the right places,” said Joe Klen, the associate dean for advancement.

Loyalty always rings true at Wabash, and that certainly was the case on 4/30, as 14 percent of the College’s roughly 12,000 living alumni donated, and nearly one-quarter of Wabash’s current student body made contributions. Further, a whopping 364 people, a number nearly equal to the day’s original goal, made their first-ever gift to Wabash.

The buzz of social media went a long way towards generating and sustaining campaign momentum throughout the day. Wabash was trending on Twitter for the first time in the Indianapolis area and there were more than 694 unique mentions from 4:30-8:30 p.m. There were almost 13,000 Facebook page views as well.

The Affinity Challenges proved to be the campaign’s engine, as the 37 individual or group challenges generated more than 850 codes entered officially on on-line donations (donors could apply two codes to a single gift).

“The affinity challenges seemed to resonate with Wabash alums because it is our nature to compete. We competed in athletics, in intramurals, and in the classroom.  Now we compete every day in the business world,” said Jim Dyer ’83. “Additionally, it was the personal nature and specific challenges that attracted people, and because we were not asking for a lot of money individually, just to give something and participate.”

“This kind of event allows us to live up to the ‘Wabash Always Fights’ motto,” Dyer said. “Seeing and reading about what was happening on campus while tracking the giving on-line added to the quality of the overall event.  Having this become a true Wabash community event was a great idea.”

When looking at individual class giving, a total of 14 graduating classes had more than 40 alumni give on that day. Every graduating class since 1948 had at least one donor and every class from 1961 through 2017 had 10 or more donors.

“It is fascinating to see that the donations reached back as far as the Class of 1948,” Klen said. “We had no idea how far this would go and the class numbers really reinforce how strong those numbers are. People were reaching out in many ways – social media, e-mail, phone calls – to friends and fellow alums and that drove participation.”

The 430 on 4/30 Day of Giving went a long way towards reigniting the spirit of philanthropy within the Wabash family. Now the focus turns to a strong finish to the fiscal year.

“We’ve done a great job in spotlighting the great things that philanthropy can do for the campus,” said Klen. “While celebrating this effort, we still want a strong finish to the fiscal year. There is still a lot of work to be done.”