The annual celebration known as Big Bash has come and gone another year as Wabash College welcomed more than 300 alumni. The 12th annual Big Bash, spotlighted the return of the “fives” and the “zeros” for a weekend that included “three cheers for Alma Mater” and the rekindling of friendships held dear. 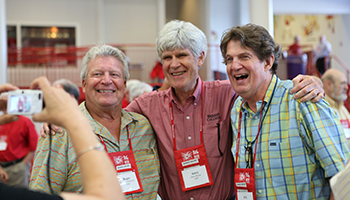 “Big Bash serves to rekindle friendships made during the formative years of a Wabash man’s life,” said Director of Alumni Relations Tom Runge. “The most interesting comments often come from spouses and partners, who say, ‘after being here for a few days, I see why this place is so special.’”

Activities kicked-off Friday with a golf scramble and ran through Sunday’s Big Bash Awards Brunch with colloquia sessions, great meals, spur-of-the-moment mini-reunions, and the ever-popular Chapel Sing sandwiched in between. 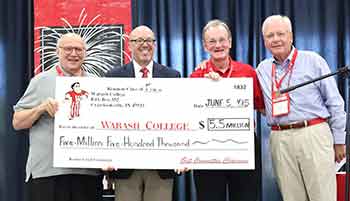 One of the driving factors behind the attendance is the growing participation from younger alumni. Runge reported the Class of 2005 had 55 alumni sign the registration book. The record for any 10th reunion is 40.

While 76 members of the Class of ’65 attended their 50th reunion, one alum topped them all. Paul Honan '43 from Lebanon, IN, was the oldest Wabash College graduate in attendance for Big Bash, celebrating his 72nd class reunion.

Registration began Friday in Chadwick Court at 8 a.m. followed by the golf outing at 10 a.m. Thirteen colloquia will be presented by alums over two days, featuring talks on expatriate life, the future of Crawfordsville, and the state of Wabash College.

The weekend wrapped up on Sunday with the Big Bash Awards Brunch.