“You have emerged stronger for your perseverance and your courage,” said Hess. “You have thrived in this environment of freedom and responsibility, and you have responded with maturity and commitment. You have been teachers just as you have been learners, and you have provided a model for us all, the great value of civil discourse in a democratic society.”

President Hess asked the graduates to reap the benefits of generosity by committing to helping others.

“Be generous to those who are outside your circle and who expand your notion of self-interest,” said Hess, “and you will see your world grow in ways you could never imagine possible.” 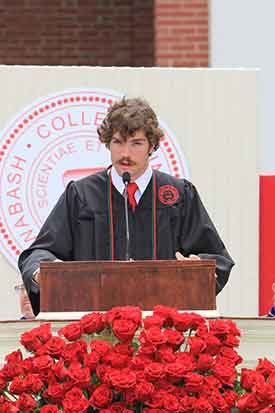 classmates to embrace the differences in the global community. McManus used the idea of reality quilts – everything an individual has ever experienced is on display – to stress that new encounters can be beautiful for all and to see the essential meaning of such meetings.

“To reduce or ignore stories for reasons of politics, confusion, or apathy is to ignore the knowledge that they offer, knowledge that is vital to confronting the social problems that underlie them,” McManus said. “This is still the sickness of our society today: an unwillingness to accept that there may be more than one valid way of seeing the world. In the end, we’ll find that fulfillment lies not in how much money we can make, or how many networking connections we string together, but in how well we are able to understand other people in a way that appreciates the vivid, intricate, messy realities that each person lives in.”

Mount implored his fellow graduates to grapple with the unfamiliar in hopes of creating better individual and collective worlds.

“We must be willing to engage with the unknown, wrestle with it, and come to understand it,” said Mount. “The world we’re stepping into desperately needs to be remade, but it must begin with each of us individually. We, all of us, are capable of beginning this work, and it begins with that small, seemingly insignificant willingness to try something beyond ourselves, to be bigger than our self. I challenge you to continue challenging what is considered acceptable. I want to push you to create a better world, a better you.”

Before ringing the bell Caleb Mills used to call the very first Wabash students to class, President Hess urged the 229 Wabash graduates to be bold. “Wabash men, you have arrived,” said Hess. “You are smart, directed, passionate, and compassionate. You have swagger. Don’t lose it. Don’t ever lose the swagger.” 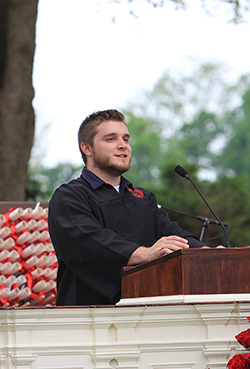 McManus concluded by acknowledging the tapestries of others can only aid us in pursuit of lifelong education. “While Wabash has given us an education, it has more so led us to embrace the education of a lifetime, an education that is at its best when we open ourselves to the stories of other people. We have been taught to know the strength in examining ourselves and to confront our ignorance. Now, as we go forth, we will have opportunities to embrace the lives of others in our global community.”

“Asking the right question may not always give us the answer we want, but it will certainly give us the answer we need,” Boesak said. “It is possible to ask for forgiveness and to have remorse. It is possible to be forgiven. If you only ask the right question. To empower us to seek the truth, to speak the truth to power, and to ask the questions that matter so that our lives may matter, so that others’ lives may matter, and this world will know the difference between darkness and light.”

The 229 members of the Class of 2015 represent just the third graduating class of 200 or more students in the last 12 years, and marks the second-biggest class in Wabash history, as the record-setting Class of 1991 numbered 231. Dating back to 2004, the College has averaged nearly 188 graduates per year, making this year’s graduating class 22 percent larger than usual.

The Class of 2015 includes a Rhodes Scholar, three Fulbright Scholarship winners, and three others who will serve fellowships overseas. More than 43 men will enroll in Ph.D. medical, law, and graduate schools. Four men will join Teach for America, while two others will serve in the AmeriCorps City Year program. Further, the class has 86 men who have already accepted full-time employment or postgraduate internships following today’s commencement.