Presiding over his last Big Bash Reunion Weekend as the College's president, Patrick White thanked the alumni for returning to their alma mater, for their enthusiasm, their encouragement, and most of all, their generosity.

"I know your love and loyalty fuels your giving, and I want to express the gratitude of the entire College for all your generosity makes possible at Wabash," President White said. "The kind of education we offer at Wabash is expensive, especially as we continue to serve those students who could never afford Wabash without large financial aid... Faced with great needs, we know that every gift matters at Wabash." 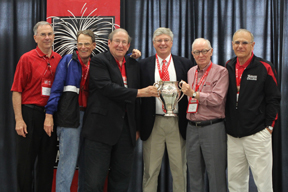 President White spoke at the final event of the Big Bash Weekend, the Awards Brunch, at which three different classes were honored. Tom Runge ’71, Senior Director of Alumni and Parent Relations, was master of ceremonies.

The Class of 1963 swept the attendance and annual giving awards. Thanks to the efforts of Class Agent Larry Hutchison and his classmates, the men of 1963 won the 1909 Trophy Cup for having 46 percent of the class return for the 50th reunion. Not to be outdone, they also won the 1928 Attendance Trophy for having 69 members of the class attend the reunion. It was the second highest total ever for a 50th reunion class and missed the record by just one person.

The Class of 1988 turned out in force, too, with 61 members of the class returning for the 25th reunion — an all-time reunion record for a 25th gathering.

Rusty Nichols chaired the 50th Reunion Gift Committee and on Friday presented the College with a class gift of more than $2.3 million. The same men shined brightly by winning the Edmund O. Hovey Annual Giving Award with a staggering 66 percent of the class supporting the Annual Fund this year. 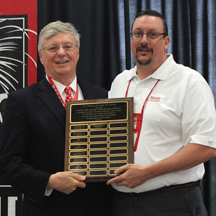 "Last time they had a reunion, the Class of 1988 had 13 guys come back," Runge said. "This year they brought back 61 men. They were the first class to win the Donor Challenge and blew by the goal by 11 donors. Greg Teague did a lot of the heavy lifting on his own, and we're proud of his efforts." 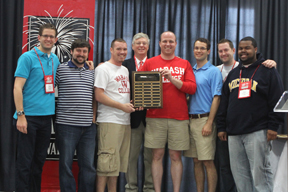 The Class Agents for the Class of 2008, Jesse James and Kyle McClammer, were also recognized with a new award, which honors outstanding efforts by Class Agents representing the 5, 10, and 15-year reunion classes. The new Class of 2007 Award was presented by Ross Dillard ’07, whose outstanding efforts in bringing back his classmates last year, led to the creation of the award.

Runge also thanked all of the people who helped pull off the Big Bash Reunion Weekend, including his co-workers Mike Warren ’93, Michele Ward, and Heather Bazzani in the Alumni and Parent Relations Office. He paid special tribute to the Bon Appetit catering crew led by Mary Jo Johnston and Kecia Tatman, as well as Executive Chef Jordan Hall. The crew served more than 700 meals on Saturday night alone — in 11 different locations.

Hall, who has served Wabash as its chef for six years, will leave the College for Greencastle, where he will head up Bon Appetit's efforts at DePauw University next year. Runge gave Chef Hall an appropriate sendoff — giving him a Wabash hat, shirt, and license plates.

Runge said 376 alumni signed the official Alumni Register and that even more returned for the 2013 Big Bash, which made it the second largest reunion weekend in history. New attendance records were set for the 5th and 25th reunions, and five classes boasted more than 30 returning alumni. Men from 30 states, Canada, and Japan returned to campus, and they ranged from the Class of 1943 to the Class of 2013.

While the crowd at the luncheon had thinned from the peak during the weekend, President White thanked the alumni for their encouragement. 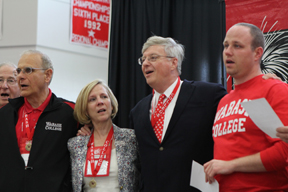 "You have lived lives you never dreamed before Wabash, and you now make those dreams possible for new Wabash men; men who like you will sit and be impressed at what their classmates have done 5, 10, 15, 20, 50 or more years after graduation... We are grateful for the way you live out the Wabash mission every day of your lives."

The luncheon ended with the singing of Alma Mater, with President and Mrs. White center stage with their brothers from across generations. The Whites were named Honorary Alumni at Friday's Big Bash Banquet.

"So as we part today, let us not say goodbye. Let me bid you fare thee well as we all say to Wabash, fare thee well. We will always love thee, and may we together hold this College deep in our care and have it live and prosper as we return to Wabash the love and courage and the power we have learned. May we remember forever that Wabash is always awake, Wabash always loves, Wabash always wonders, Wabash always dreams, and through it all, Wabash Always Fights and always means always."