The event is sponsored by the Wabash College Rhetoric Department and the Indianapolis Association of Wabash Men. 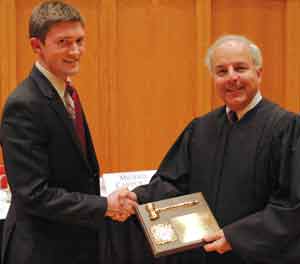 Just like previous years the court case debated came straight from news headlines. The four finalists made oral arguments to a sitting panel of judges on the enacted Patient Protection and Affordable Health Care Act.

The Petitioners were Tim Markey '12 and Andrew Dettmer '15. Henke '12 and Michael Carper '13 were the respondents. Last year's Moot Court winner Donovan Bisbee '12 was the first alternate. The competition started with 30 Wabash students who were judged by faculty and Wabash alumni lawyers in previous rounds.

It was tough going for all four students Wednesday night from an aggressive panel of judges. Chairing the judges' panel was Edward W. Najam Jr. of the Indiana Court of Appeals. Returning from 2008 as a judge was Elaine B. Brown of the Court of Appeals. Fred Whitmer '69 flew in from New York to be a judge. He works in the international law firm Kilpatrick, Townsend & Stockon. And as in previous years a Wabash faculty member, Dr. Frank Howland, rounded out the panel.

"The judges were very impressive," Henke said. "They moved so quickly to the substantive questions. I had watched the previous final rounds and there was a difference in this round. I was hoping, frankly, they would ask all the questions they did because I'm more comfortable having a conversation than giving a long drawn-out speech."

Professor Scott Himsel '85 even noted before the top advocate was named that Tuesday night's panel was one of the most aggressive in recent Moot Court history. 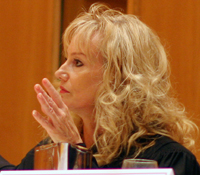 "These kids did an incredible job," said Judge Brown. "The quality of the advocacy was on par with law schools. I think it's an amazing opportunity for these kids to get to argue in a Moot Court like this one. The complexity of the cases certainly are on par with any law school assignment. They're already above and beyond college level."

Henke had competed in Moot Court as a freshman and sophomore, but was studying abroad last fall. The Student Senate President is a political science major along with a Rhetoric and Spanish double minor. He is a Residence Hall Advisor, member of APO, French Club, Spanish Club, and Wabash Christian Men. He plans to attend law school.

"It's exciting to win," the senior said. "I definitely could notice the difference of doing Moot Court after taking the Constitutional Law course with Professor Himsel. The difference is enormous. We had just finished up the unit on the Commerce Clause so I feel like certainly Tim and I were immersed in the materials going in to the competition. These other two guys definitely got up to speed quickly though."

Moot Court was streamed live via the internet for the first time in the program's history. As in previous years, students and faculty from Lawrence North Nigh School, Indianapolis, joined a good student turnout in the audience. LNHS and Wabash have had a partnership supporting their respective Moot Court programs for many years.