Steve Charles’ self-deprecating humor and skills of observation were on full display during his Thursday morning Chapel Talk. The Wabash Magazine Editor titled his remarks: “Show up: A Sociophobe’s Guide to Surviving Wabash.” 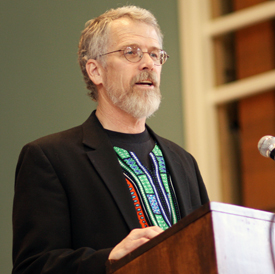 He talked about his fears of giving such a talk and reluctance in nearly all situations to speak publicly. But even through that Charles poked fun at himself, weaved in a few anecdotes – including fashion advice from Steve Webb and Bill Cook – and explained his love of Wabash College.
“For me, this is holy ground,” he said. “What makes this space sacred to me is not the institution, but the people who have spoken here.”
He talked about the Chapel Talks of Professor of Religion Hall Peebles and College Dean Paul McKinney. He noted how Professor Marc Hudson, from the same podium, provided one of the great descriptions of Wabash: “What is Wabash but friendship and story? The history of a hunger to know.”
Charles added the Monon Bell Chapel Talk of Wes Chamblee, injured and out for the 2010 Bell game, as another highlight. Chamblee’s talk focused on the blessings and hardships of his Grandfather. Charles also shared memories of his friend and co-worker Susan Cantrell, his close personal friend Mike Bachner, and reflected on many of the great talks of Bill Placher.
Charles then turned his attention to the focus of his talk: ‘Show up, pay attention, tell the truth, and don’t anticipate the outcome.’
He focused on ‘show up.’ He shared his pain and sometimes embarrassment of being shy or a sociophobe and how a camera and opportunity to tell great stories has been his cure for the past 16 years. He talked about important times in his life when he could and could not  ‘show up’ for family and friends, and those he admired who always managed to ‘show up.’
He urged the young men to show up – “never knowing where it may take you, standing where those you’ve most admired have stood, but doing something you’d never before imagined you could."
“Thank you all for showing up.”
See Charles full Chapel Talk in the video below: