Moot Court gives Wabash students the opportunity to practice real-world oral advocacy whether they plan on pursuing a career in law or not. A perfect example is 2010 Moot Court winner Donovan Bisbee ‘12, who plans to go into teaching.

Moot Court began at Wabash in 1995 and remains one of the few undergraduate Moot Court competitions in the country. This year's event started with 24 Wabash men and was paired down to Kyle Bender ’12, Riley Floyd ’13, Steve Maynard ’11, and Bisbee.
See photo album from 2010 Moot Court here. You can watch the entire Moot Court competition on Wabash's YouTube page. 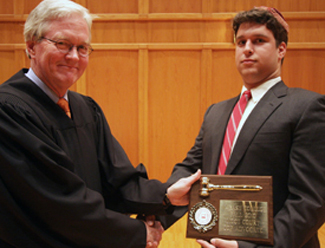 The students argue their case in front of three real judges and a Wabash College professor. The judging panel was led by John Tinder, U.S. Circuit Court of Appeals 7th District, Paul D. Mathias, Indiana Court of Appeals, and Tim Oakes ’86, Marion Superior Court.
The Wabash judge was Dean David Timmerman of Monmouth College. Timmerman ended 16 years as a Wabash Rhetoric professor over the summer to become Dean of Faculty at the Illinois College. He also was one of the guiding forces in growing Wabash's Moot Court.
Wabash alumni play an active role in shaping the case, advising the students, and judging the preliminary rounds. This year’s case tested a state statute limiting the ability of a business to sell or rent violent video games.
The judges’ panel was aggressive from the start, peppering each of the respondents with a question before they even got to their prepared remarks.
“It feels really incredible and wasn’t something I was expecting,” Bisbee said of the win. “This was such a strong round; it could have easily been any of the other three guys.”
Bisbee had participated as a freshman and in his words “just got demolished, rightfully, in the semi-finals.” The lesson he learned from his previous experience was the necessity of preparation. “I spent a lot more time just researching the precedents and the facts of the case and trying to look at how to tie the arguments together,” the junior said. “I picked up some really valuable skills in the preliminary rounds. I got great advice on how to turn the judges to your argument.”
Bisbee, a rhetoric and English major, plans to go to graduate school and then pursue teaching.

Each year one of the judges is Wabash alumnus. Tim Oakes ’86 said he enjoyed coming back for Moot Court. “It’s a great experience to see the tradition of oral advocacy, sort of in the tradition of Vic Powell and others who were here before, to carry on the strong Wabash tradition of oral advocacy,” he said. “It was just great to see that the College is still as strong as ever based on the performances here this evening.”
Afterwards, the three sitting judges praised the students for their preparation. But Oakes got the biggest ovation when he talked about his pride and the joy of seeing the students early in their careers. He expressed his confidence the students would grow into self-confident, and perhaps even difficult or irascible attorneys.
But he expressed that sentiment in more common terms any Wabash man would clearly understand.

In photos: Judge Tinder presents Donovan Bisbee the Top Advocate Award. Below, is all of the students, alumni and faculty participating in the 2010 Moot Court Competition. 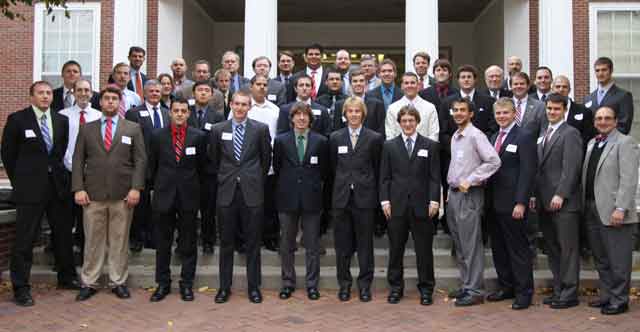