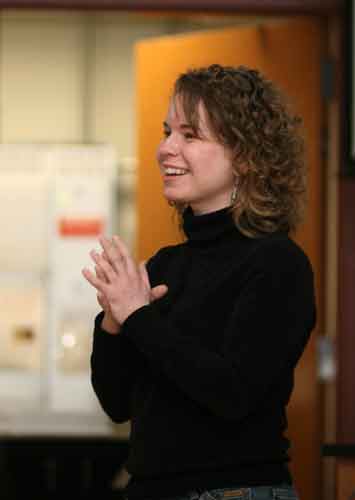 “The fulcrum of my career.”

“What I’ve been working toward for the last 10 years. “

“A great moment for my family.”

Their descriptions of the milestone they’ve just achieved are as varied as their fields of study, but Amanda Ingram, Peter Hulen, Tim Lake, Peter Mikek, and Brian Tucker ’98 have at least one thing in common as the holidays draw near—they are newly tenured faculty at Wabash College.

“These professors bring passion, commitment, and energy to the task of educating Wabash students,” Dean of the College Gary Phillips said as he announced that all five faculty eligible this year had been granted tenure after a rigorous, five-year review process. “In them we see evidence of the excellence demanded of all Wabash teacher/scholars: student learning that is at the center of their attention; scholarship and creative research that informs the ways they engage students and colleagues; and leadership that strengthens the community.”

Recently awarded a grant from the National Science Foundation to pursue her research in chloridoid grasses, Assistant Professor of Biology Amanda Ingram called tenure “the goal I've been working toward in one way or another for the past 10 years or so.”

“It’s very exciting to have finally reached that goal, especially to have reached it in the biology department at Wabash College. The department has a rich tradition of providing a rigorous education in our discipline, which means we attract a large number of high-quality, hard-working students to our major. Both of these things make it a pleasure to teach here.”

“Counted among Amanda’s many strengths is her capacity to draw students into the study of plants with intensity and enthusiasm that opens up a new world to unsuspecting eyes,” Phillips said. “In so doing, she sets the academic bar high. She motivates students inside and outside of the classroom and laboratory not only to achieve in science but succeed in life, to demand more of themselves than they might ever have imagined, to discover through disciplined reflection something other about themselves than they previously knew.” 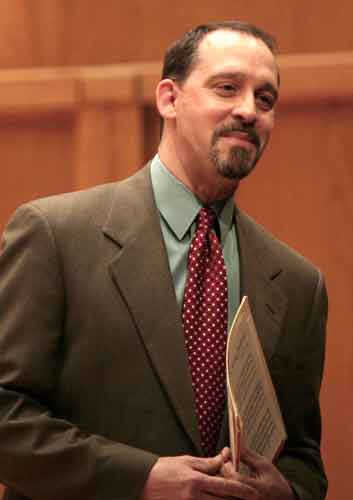 “It is both affirmation and confirmation of my work up to now, and of a way forward toward continued contribution to students' development, greater leadership at the College, and maturity as a creative artist,” said Hulen, who is developing a new course in electronic music history and literature this spring. “We are so defined in our culture by the work we do; this tells me personally that what I do is meaningful and valuable.”

“From electronic music lab to brass ensemble, Peter finds ways to engage students and elevate musical comprehension and performance across the campus,” said Phillips. “Through his distinctive combination of mathematical imagination, digital creativity, and auditory precision, Wabash students discover the integrative and demanding character of the humanities, the way knowledge and practice cohere, and how music as a fine art is a quintessential liberal art.”

Assistant Professor of English Tim Lake sees tenure as “an invitation to join the ranks of the senior faculty at the College.” He recalled Dean Emeritus Raymond Williams telling him early in his career, “Your success will depend upon the integrity by which you approach your responsibilities.” 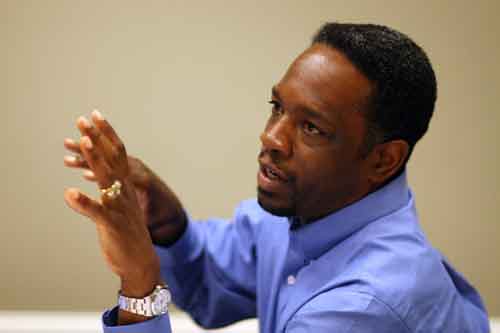 “What I took him to mean is that hard work and good intentions (as opposed to perfect results) will be rewarded. Though I’ve often had occasion to doubt the wisdom of these words, the tenure promotion makes me want to believe that they are true— at least at Wabash.”

“Exemplifying one style of interdisciplinary teaching and learning, Tim brings to the classroom a commitment and thoughtfulness that invites Wabash students into critical encounter with African American life and experience,” Phillips said. “Tim leads students to interrogate what it means to be human and to articulate for themselves their own ways to make a difference in the world.”

Lake is also director of the College’s Malcolm X Institute for Black Studies.

“That the director of the MXIBS is also a tenured member of the faculty moves us closer to the vision that its founders—administration, faculty, and students—had nearly four decades ago,” said Lake, who is preparing for publication research completed over five summers with 10 student interns on African American public markers. “As a persisting member of the faculty, I join others in the work of making real the promise expressed in 1970—the MXIBS as a constitutive element of the College’s teaching mission.

“The tenure promotion represents both a personal achievement and a family milestone,” Lake added. “I share this recognition with my wife and extend whatever honor it brings throughout my entire family and community.” 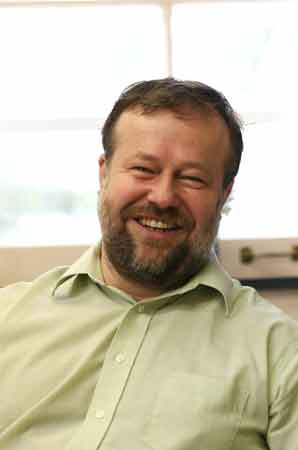 Phillips said Assistant Professor of Economics Peter Mikek “models the Wabash faculty expectation of being present to and demanding of students.

“Whether in the office, the classroom, or through casual encounters on the mall, Peter teaches the whole person. Conversations about complex macroeconomic realities in diverse cultural settings serve as occasions not only for students to comprehend economic activity, but also as moments of self-examination and self-discovery. Such mentoring, as Peter practices it, is attuned as much to the heart as it is to the mind.”

“This tenure decision is a great reassurance that my striving to contribute to a better world through my work one student at a time was the right pursuit,” said Professor Mikek, who will lead students in the College’s Summer Study in Ecuador’s economics module this summer. “It is absolutely splendid that I will be able to continue working with my highly esteemed colleagues and friends in economics department. It boosts my strong motivation to continue working on my research program. And on a personal level, tenure means less uncertainty about our family’s future—the news was greeted with very loud expressions of satisfaction by my boys!”

For Wabash alumnus and Assistant Professor of Modern Languages Brian Tucker, the decision completes a circle. 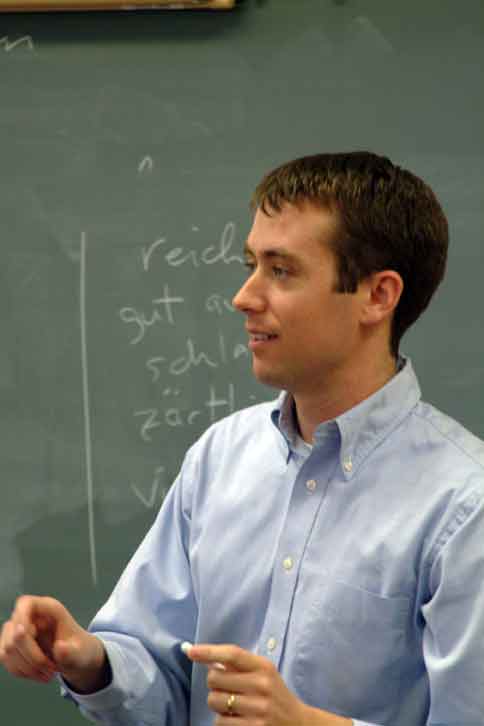 “It's a long-term commitment on the College's part, and it's gratifying to have that signal of confidence in my teaching and my ability to contribute to the academic mission,” Professor Tucker said. “It's especially rewarding in that I feel like I've been accepted into the ranks of the same faculty that I learned from and looked up to when I was a student here—people like Professors Leslie Day, Cheryl Hughes, and Steve Morillo.

In professional terms, Tucker says, “I hope it gives me the space to pursue research projects that are bigger, messier, and ultimately more ambitious than what I produced with the tenure clock ticking.”

Phillilps said that Tucker, whose book Reading Riddles: Rhetorics of Obscurity from Romanticism to Freud, will be published in 2010, “exposes Wabash students concretely to German life and culture in ways that engage them in thoughtful reflection about their own norms and lived experience.

"Textual and travel immersion serve as the vehicle by which Brian guides students outside of themselves through Brecht and Berlin as foreign country,” Phillips said. “In the course of this journey, students discover what is strange and familiar about home, and how through disciplined practice the liberal arts can open up new worlds.”

“Because of their labor and the standards set by these newly tenured professors and their colleagues, the lives of Wabash students will continue to be transformed and the mission of the College advanced.”

Articles featuring Ingram, Mikek, and writing by Lake appear in the Fall 2009 issue of Wabash Magazine, in the mail on December 21.  More about all five newly tenured professors will appear in the Winter 2010 edition.