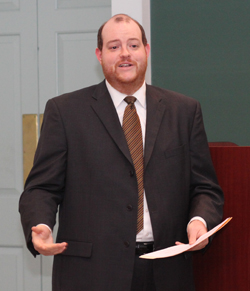 Creason began working in the Attorney General’s office while still in law school. He recognized early that he wanted to work in appellate law which he does today. He enjoys public service because he does not represent a single person seeking to get more money out of someone else, as often seen in private practice, but deals with cases that contribute to the greater good of the community.
He encouraged the students to work in public service at some point in time “even if it is donating some time or sitting on the local school board.” Creason has found his work rewarding. “I’ve never carried anybody’s brief case, and no one carries mine. Two weeks after I started full time, I tried my first case.”
Joven has been a judge since 2006. Joven said he “has the best of both worlds” since he also practices part time for a private firm in Indianapolis. Before he took the bench he worked in various other public service positions including the Indiana Attorney General’s office and for then Indianapolis Mayor Stephen Goldsmith ’68. 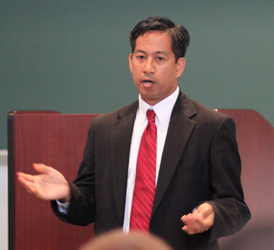 Joven feels public service has given him the opportunity to keep his law skills sharpened, keeping up with many cases at one time, and being responsible for all aspects of the cases. Further, he was drawn to become a judge because, “I want to make sure the area I live in is a safe one to raise my children.”
Minkler began as a Deputy Prosecutor in Kent County, Michigan (Grand Rapids). “Just like you, when I was a student I had big ideas,” he said, “about what I was going to do with my life to make a difference.”
He said, “At Wabash, you talk about those things. Professors believe that about their students and encourage it. I didn’t believe it. But my mentors did, people like Dean Moore, Ed McLean, and Coach Rob Johnson.”
Minkler decided he wanted to be a lawyer like on TV. He wanted to handle the significant cases. “When I started, I didn’t handle the big cases. Sometimes I thought I was the only one that thought my cases were significant.” 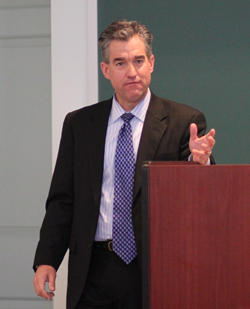 Then, after a few years he found himself in the middle of a high profile murder case. “Here’s my chance to do what I said I wanted to do,” he said. “I was so nervous all I could think was ‘don’t screw up.’ Eight days into the two week trial, I looked up and saw Coach Johnson sitting in the court room. He said, ‘Minkler, how you doin’?’”
Even after leaving Wabash, his mentors were still there to encourage him.
This summer Minkler worked on a police corruption case where an elite narcotics unit was found to be dealing drugs and pocketing money from drug busts. He described the pressure of making sure every piece of the case was in place before the arrests were made and the trial started. They (US Attorney’s Office’s) were also responsible for helping reestablish the public’s trust in the police department where the corruption occurred. “We had to let the community know we had cut all the bad stuff out.”
As the trial began, Minkler thought to himself, “This is the BIG case I talked about when I sat where you are now. I heard ‘Let’s hear from the U.S. Attorney.’ I stood up and said, ‘My name is Josh Minkler and I represent the United States of America.’”
Photos: above right, Stephen Creason '97 Deputy Attorney General, Office of the Indiana Attorney General, above left, the Honorable James Joven '89, Judge, Marion County Small Claims Court, right, Josh Minkler '85, Assistant United States Attorney, U.S. Department of Justice