Preston Bost brought Thursday’s Chapel crowd to its feet with a well-crafted talk on Wabash and how men communicate with each other. 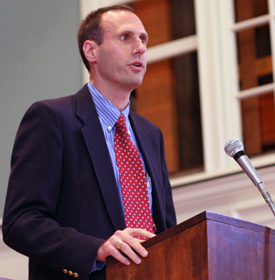 The Professor of Psychology used humor to set the foundation of his Chapel talk illustrating how women communicate with each other on a more intimate level than men. He quickly added the psychology of gender is always a difficult topic but challenged the Wabash men to move beyond the traditional male-to-male communication model of just talking about systems.
Women are generally better maintaining eye contact, he said while men often lack empathy when they do engage in deeper conversation. He also offered the disclaimer that not everything he was saying applied to all men or all women but offered the psychological research available to challenge Wabash’s 900 young men.
“For no other reason, reflect on what I say because you love Wabash,” he said. “Talk to the faculty and staff about those who have lost their jobs. Talk to the administration about the agonizing decisions they’ve had to make. Talk to a student whose parent is unemployed.”
He emphasized he was not asking for fundamental or substantial change but “a little more awareness for the opportunity and growth in our relationships.”