Rare Drums from Nigeria Given to Wamidan

The drums retired Loras College Professor of History Fred Morton donated to Wabash College and the Wamidan World Music Ensemble were acquired during his work as a Peace Corps volunteer in the 1960s with the Ibibio people in the Ikot Ekpene region of Nigeria.

"The Ikot Ekpene area was a musical paradise,” Morton says. “It is situated in the midst of an expansive domesticated raffia and oil palm forest, intensely cultivated for yams and cassava, and supporting one of the densest rural populations on the globe. The forest yielded all sorts of plants for the creation of the Ibibio people's material culture, from its furniture to its roof shingles, mats, ornaments, eating implements, and, yes, musical instruments.

"No night passed without the sounds of these drums emanating from one corner of the landscape or another. 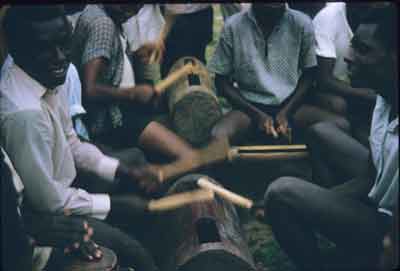 “The instruments were played for their sounds and the intricate overlays of rhythm the men and boys who played them could generate.  The drums, not the drummers, were the performers.  Players looked down tilting an ear, or glanced at other players as they synchronized their strokes, seldom noting the people gathered to listen.
“The slit drums are made from Iroko wood, which can be chiseled without splitting, i.e., the wood is hard enough to resonate but soft enough to be worked. Ideally, they would be played at their highest quality when new, because the wood would still retain some of the moisture needed to emote a round, full tone.

"There are three ways to play these two-lipped drums. The lips on each drum are cut at different thicknesses each to deliver one distinct tone, and the drum is sometimes also struck on the side to give another tone, usual brittle, to blend in to the percussion assembly. The two-lipped drums are played with two mallets, one for each hand of course, and the mallets are made from the ribs of raffia palm fronds, stripped of their skin, leaving only the soft, fleshy inside.
“Commonly, music in the Ikot Ekpene, Ibibio-speaking area, is performed by percussion troops.  As many as 15-20 percussionists may be involved, a portion playing different sizes of the two-lipped drums to create a cascade of tones, metal gongs of different sizes (including the very tall gong in storage), rattles, and skin-covered drums.
"A percussion group, particularly paid for to perform at funerals or wakes, is centered around the lead drummer, who sits atop a large square skin drum and strikes it with his palms while varying the tones by pressing his heels against the skin (there are at least two slides showing such), and his energy and creativity often are rewarded by bystanders, who approach him and press a coin or a small denomination note on his sweating forehead.  These groups are surrounded by men dancers circling the drummers clockwise and counter-clockwise, among whom is the co-ordinator using a whistle to signal changes in rhythm and pace. Women do not partake, though individual women among the bystanders commonly are moved by the occasion and break out for a few moves.“ 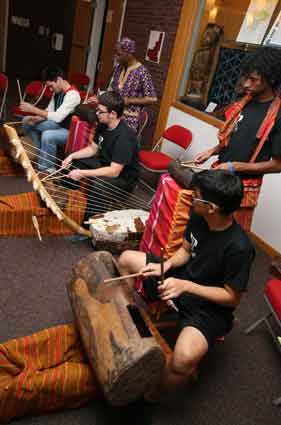 Ethnomusicologist and Wabash College Associate Professor of Music James Makubuya offers the following explanation of how drums are used by many African peoples, and the difference between “slit” drums those with skin heads:

"African drums are musical instruments that serve two functions including one of enhancing cultural ceremonies, events and rituals and the second one being that of providing a means of communication.
"When the phrase ‘African drums’ is used, most people think or know only about those sound production objects that fit the classification category of ‘membranophones’, meaning those musical instruments the sound of which is produced primarily as a result of the vibration of a stretched membrane.
"But especially in Sub-Saharan region referred to as West Africa, there is another type of sound production objects generally referred to as ‘African drums’ that are built with no membrane at all. And because they have no membrane built on them, the common ethnomusicological descriptive name for these type of drums is ‘slit drums’.
"These ‘slit drums’ are found commonly used among the Yaka, Dan, Igbo, Bamireke and Yangere peoples to mention but a few. These ‘slit’ drums range from everyday objects with monumental, simple forms to ornate pieces bringing status to the owner, connoting power and the honoring of ancestors. They are also often embellished with low relief carving of figures, animals and objects that show the creativity the makers put into them as functional objects. They are also characterized by intricate intertwined abstract designs, a few with faces or hand motifs, that show the variety and skill known by the sculptors.
"Slit drums are built with hollow chambers and long narrow openings that resonate when struck. They are also often designed with either a human or an animal form in which the drum becomes the body. Some ethnic groups use both the vertical and the larger horizontal types.
"In the construction, from the large poster piece to the smallest, each shows a careful design and execution meant to foster both belief and prestige. Variations in the thickness of the walls of these drums would vary the tones when struck by heavy wooden drumsticks.
"Many slit drums are used primarily as a signal gongs to alert, assemble or provide information to the villagers."

In photos: Slit drums being played during a masking ceremony in Nigeria in 1963; Professor Makubuya leads the Wamidan world music ensemble through a practice with the newly donated slit drums.