Grossnickle '73 Urges Students to Give Back 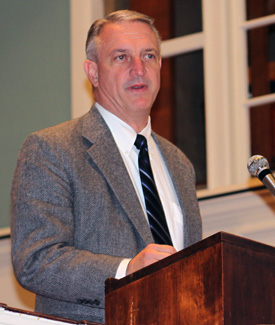 Trustee Ted Grossnickle ’73 gave Wabash men six good reasons to “give away money’ during Thursday’s Chapel Talk. The talk was the centerpiece of morning activity sponsored the L.E.A.D. program and part of Wabash Always Gives Back Day.

Grossnickle recalled his college days of mandatory chapel and the occasional boring speaker. But after getting the students attention with a little humor, he focused on his message. “Wabash needs people to actively support this College with gifts,” he said.
He noted that too many may think someone else will make a gift but the reward of helping others makes the act personally rewarding.
He ran through a list of six reasons to give money away including: human nature, tradition, and seeing the rewards your gift made possible.
He also got the students attention by noting the tuition checks their parents have written since July 1 cover the cost of a Wabash education until early October. The generosity of alumni, grants, and gifts make the rest of the school year possible. 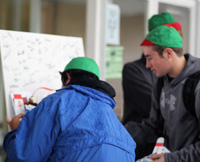 “You’re sitting in a place created and sustained by givers,” he closed. “One day soon it will be your turn.”
After the talk, ice cream was available in front of sparks. “Give back” boomerangs were given away. And students were asked to sign a giant ‘thank you’ card which will be used throughout the year at donor events.