Wabash College President Patrick E. White and Dean of the College Gary A. Phillips today announced the appointment of Professor Leslie Preston Day to the Charles D. and Elizabeth S. LaFollette Distinguished Professorship in the Humanities. The announcement was made at the regular meeting of the faculty, and resulted in a lengthy standing ovation. 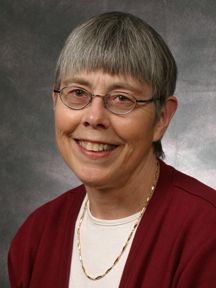 Professor Day becomes only the fourth person to hold the LaFollette Chair since its establishment in 1978. A teacher and scholar of classical studies, she becomes the first person outside the Religion Department and the first woman to hold the chair. Religion professors Eric Dean, Raymond Williams, and William Placher previously held the position.

“I’m delighted and honored,” said Professor Day. “It’s a daunting task to following in the footsteps of such fine colleagues.”

“Leslie Preston Day is regarded by students and faculty alike as intellectually challenging and engaging and one who settles for nothing less than the best from both,” said Dean Phillips. “She works hand-in-glove with students here at home and abroad, and routinely teaches overloads in order to shepherd students through the classics major. She also actively mentors younger Wabash colleagues and encourages them onto research and scholarly excellence.”

“The students at Wabash have been wonderful,” Day said, “and I’ve had the pleasure of working with really fine colleagues who have the same love and passion that I do.” 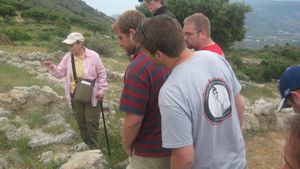 An active, working archeologist, she began her excavation of ancient sites at Kavousi on the island of Crete in Greece in 1978, and has spent nearly three decades studying Minoan and Greek civilization of the period from 1100 to 750 B.C. Not only is she a preeminent scholar, she has extended the Wabash classroom to Crete while employing Wabash students as interns on the dig site in virtually every summer of her work in Greece.

“Professor Day is internationally recognized for her hands-on teaching and research,” said Dean Phillips. “She is responsible for one of three major American archeological sites in Greece has made it possible for numerous Wabash students to experience first-hand the humanities as labor not only of the mind but of the back as well.”

Day estimates she’s worked with approximately 30 Wabash student interns in Kavousi, including a few biology students who got a crash course in palaeobotany while in the field. 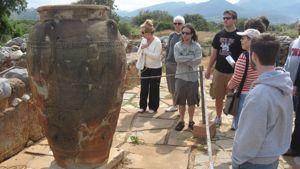 Her first student intern, Tom Brogan ’88, followed in his professor’s footsteps — to Crete over the summer and on to Bryn Mawr College, from which he earned his Ph.D in classics. He is now the Director of the INSTEP Study Center for East Crete and manages the storage facility for all American discoveries there, including those finds from Day’s digs over the last two decades.

“It’s nice when you have students go on in your field,” she said. “It’s nice to know that you have shared your passion for the field and it allows you to live vicariously through their work.”

Interesting today’s college students in classical art, archeology, Greek, and Latin can be a chore, said Professor Day. Still, a number of Wabash students continue to pursue graduate work in the field. “We use the John Fischer method of advertising — we invite students over for lots of meals to get them interested. And the quality of our teaching in this department is quite high, and we do have passion for the subject!”

Professor Day has been a prolific writer and scholar in her 25-year Wabash career. She has published five books and has another five in progress. She has published dozens of journal articles and book reviews, and has presented 29 professional papers and given 11 invited lectures. 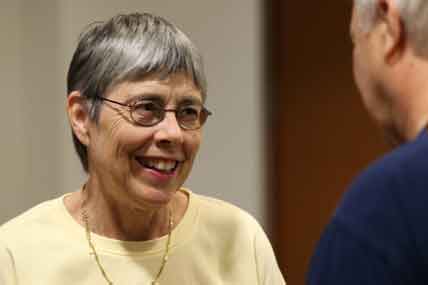 She and two co-directors have received grants to further the work at Kavousi from the National Geographic Society, the Institute for Aegean Prehistory, the Packard Foundation, the National Endowment for the Humanities, the American Philosophical Society, and the universities of Tennessee and Minnesota. The team is publishing a comprehensive eight-volume series that chronicles more than 20 years of work at the site. In 2005, Dr. Day received the Whitehead Professorship at the American School of Classical Studies in Athens.

“The LaFollette Distinguished Professor of Humanities chair brings together the threads of excellence in teaching, engaged support and service to younger scholars, and humanistic research and scholarship of international quality and importance,” added Dean Phillips. “She has a demonstrated record of teaching, scholarship, and service in the humanities befitting the past holders of the Chair — Eric Dean, Raymond Williams, and Bill Placher.

The five-year appointment is effective immediately.