The Wabash College Society of Class Agents gathered on campus for their annual forum, and this year they were joined by a host of alumni volunteers, including those planning their Big Bash reunions and scheduling regional events like WABASH Day community service activities.

Alumni Director Tom Runge ’71 served as master of ceremonies for the festive banquet Friday evening, which was attended by more than 70 volunteers and their guests. See pictures of the award winners here. 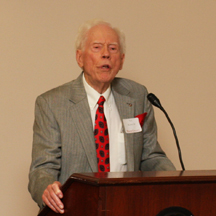 The signature award is the “Class Agent hall of fame” award, and is named for the late Warren Shearer. The winner, Ned Rickett, who serves the Class of 1940, began his duties as Class Agent in 1954 and has been a steadfast performer over the last 55 years.

“Just for comparison, our freshman class members were born in the 1990s,” quipped Runge. “Think about that. Ned had already celebrated his 50th reunion at Wabash before they were born!”

Rickett stays in touch with his classmates and widows as much today as he did 25 years ago, and he continues to “spread the fame of her honored name” by helping in the College’s recruiting efforts.

“Ned Rickett, Class of 1940, your efforts have always been — and continue to be — world class,” said Runge. “The college and the Society of Class Agents are proud to induct you into their own special Hall of Fame. Congratulations on winning the 2009 Warren Shearer Award.” 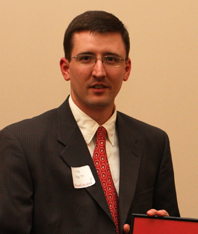 Craig Higgs (pictured with President Pat White), Aman Brar, and Ethan Olberding were honored with the Robert Mitchum Award as the Outstanding Young Class Agents for the work they did on behalf of the Class of 1999. It was a Big Bash Reunion year for the Class of 1999, and communication leading up to the reunion was first rate. Thanks to reunion chair Dave Coates, the reunion was a smashing success.

Moreover, the Class of 1999 really stepped up to the year-end Annual Giving Challenge.

“With a concerted effort, the gifts came rolling in [before Big Bash],” said Runge. “But the class didn’t stop there and ended the fiscal year with a 29.4% increase in donors. They were one of only two classes to show an increase in donors during the tough financial year and bested everyone with an increase of 15 alumni donors over the previous year. Their final giving percentage placed them higher than any class going all the way back to 1988.”

The Myron Phillips Award is presented to the Class Agents who perform their duties most admirably over the course of the year. This year’s winners were nearly a no-brainer: Craig Green, Roger Billings, and Bob Wedgeworth — Class Agents for the Class of 1959 — took home the hardware after a smashing 50th reunion. 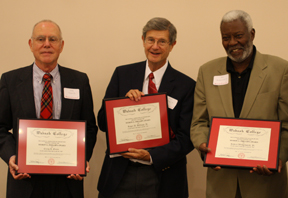 “As we all know, these three Class Agents are active volunteers in many other areas of the College, as well,” said Runge. “All three help recruit new students to Wabash; Rog and Bob both serve as Trustees; Roger is a key leader in the Cincinnati area; and Craig is very active with our local alumni group.”

Billings, Wedgeworth, and Green coordinated communications (nine letters) for their class, and reunion chairs Sherm Franz and Hoyt Miller dug in to bring back record-setting numbers to the Big Bash Reunion. A total of 71 members of the Class of 1959 came back for the 50th reunion, shattering the previous record for the 50th reunion class.

The Class of 1959 also had a terrific annual giving percentage of 61 percent, which was a bump of seven percent over the prior year. The Class presented a check for over $1 million as its 50th reunion gift to the College.

Dean for Advancement Joe Emmick was the keynote speaker, and used what he called “small, simple examples” of the breadth of the volunteers’ work, including the record-setting reunion of the Class of 1968, after which classmates Bruce Gras and Jim Roper developed the “Brother to Brother” alumni mentoring program and the Wabash Stories website.

Emmick said that many times, volunteers don’t realize the impact their work has; Wabash volunteers move on to the next act of giving without understanding the reach of their work.

“I hope you’ll take some time to step back, reflect, and realize the impact of your work,” he said, “and how important all of you are to Wabash College.”