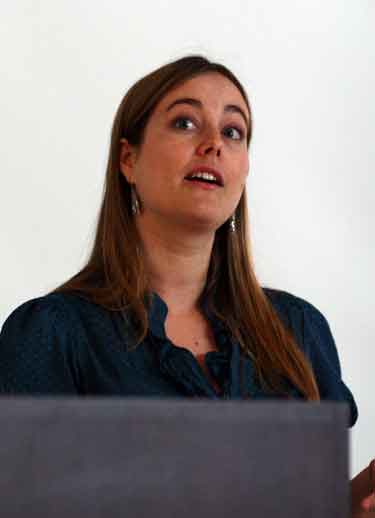 Musicologist and Assistant Professor of Music Vanessa Rogers led off the second session of this year’s Ides of August with a discussion of her research on 18th century English theater music and orchestral seating in the theaters of Georgian era.

Rogers’ interest in the topic began while she was doing research on another topic at the Folger Shakespeare Library in Washington, DC. There she came across a well-preserved sketch of a seating chart and the orchestra pit layout for the Old Drury Theatre in London circa 1790.
“It is the only seating plan for orchestra from this era,” Rogers said, noting that Georgian era theater and playhouse music is abundant and interesting yet often ignored by scholars.
“There was so much music going on then,” Rogers said. “It astounds me that no one has looked at this before.”
All sorts of information can be deduced from the seating chart and illustrations from that period. For example, the chart shows the piano or organ positioned so that all orchestra members can see the keyboard player, who also served as director in this age before conductors took the English music stage. One can also see which instruments were featured and how many were played.
The cramped seating (Rogers noted that the space between listeners and performers was often less than you’d find today in the coach section of an airplane) also meant the musicians were “subject to abuse from the audience.
“That happened frequently,” Rogers said, showing illustrations from the period of fights breaking out on English theater stages. “There were a lot of riots, and the first thing they’d do is go right for the orchestra and break all the instruments.”
As a musicologist, though, Rogers said, “it’s most important to take into account how the director and composer would have thought about the direction of the sound, and how it would carry in these theaters when they were composing these pieces. So we can’t take our 21st century notions of what an orchestra should sound like and place them over 18th century, because our conclusions would be completely incorrect.”
Studies such as that Rogers is conducting will provide us with a truer sense of how the performed music of that time sounded. 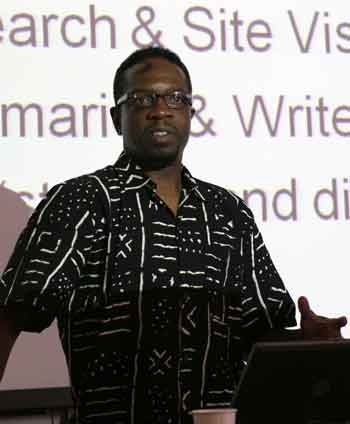 In “African American Markings: Finding Indiana’s Black Public Landmarks,” Assistant Professor of English and Director of the Malcolm X Institute for Black Studies Tim Lake summarized four years of research at the MXIBS. That work, gathered by ten students supervised and coordinated by Lake between 2005 and 2009, led to a survey and database of Indiana’s known and little-known African American historical sites.
The database, compiled and made searchable over the summer by Chris Nelson ’11 and funded by the College’s Know Indiana grant from Lilly Endowment Inc., includes 270 sites from 60 Indiana counties. It is the most comprehensive survey of African American sites in the state and will become a resource for state, regional, and national research.
Lake told the story of how Wabash student Tamarco White ’06 researched one of the most difficult to find sites in the Hoosier National Forest in Orange County, a marker signifying the former location of Lick Creek, or “Little Africa,” a settlement founded by African Americans who came to the then-Indiana Territory from the Carolinas.”
“It was founded in 1817, so we have African American presence here long before Indiana became a state,” Lake said.
“This research has enhanced the academic standing of the MXIBS and Wabash, and will be used by state, regional, and national scholars,” Lake added as he invited his colleagues on the faculty “to use this database as a resource for research across the curriculum.” 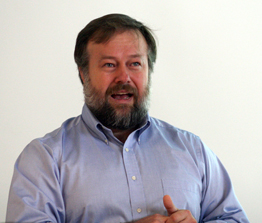 Assistant Professor of Economics Peter Mikek discussed the new methodology used in his study with Professor Avenka Kavkler of the University of Maribor in Slovenia regarding the causes of inflation in the countries of Europe. The research attempts to determine, among other things, whether the growth of debt is a standard predictor of inflation in those countries.
The professor both informed and entertained with his creative approach to explaining a difficult concept—how one makes sense of and partitions the “cloudy” and seemingly disparate data sets drawn from studies of inflation in countries with very different fiscal and monetary policies.
Mikek focused his talk on the methodology of the study rather than its results, because, as he concluded, “this a general methodology that can be used in other disciplines.” 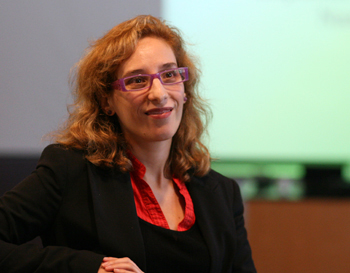 Assistant Professor of Modern Languages Isabel Jaen-Portillo closed the morning session with her presentation, “Why We Need Literature: The Role of Fictional Narratives in Human Development and College Education.”
Among Jaen-Portillo’s many areas of interest is cognitive literary studies, in which recent interdisciplinary research is documenting and confirming the importance of fiction in human life.
“Scholars in literature, psychology, neuroscience, and other fields are increasingly joining forces to demonstrate that fictional narratives are a fundamental component of human development and education,” Jaen-Portillo said.
She quoted linguist George Lakoff and philosopher Mark Johnson whose book Metaphors We Live states that rather than simply a device of the poetic imagination, metaphor is pervasive in everyday life... Our ordinary conceptual system, in terms of which we both think and act is fundamentally metaphorical in nature."
“Literature is not simply a medium for social and cultural refinement,” Jaen-Portillo added, “but also functions as a practical tool that provides us with an enriched learning environment in which to study social behavior. These practices form part of our building— our lifelong process of learning.
“Fictional narratives allow us to project ourselves into the situations and the minds of characters, promoting our understanding of other.”
“Fiction functions as a moral laboratory,” Jaen-Portillo added, citing Jemeljan Hakemulder. “As psychologist Richard Gerrig tells us, ‘literature is necessary and not just nice.” 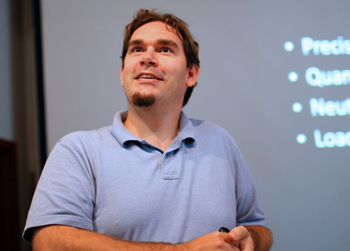 Assistant Professor of Physics Martin Madsen started off the final session of the day with an introduction to “Atomic Physics at Wabash.” He opened with a quick history of the contributions of atomic physics, from gas-filled lights to laser beams to the atomic clock (without which your GPS system wouldn’t work) and quantum computing. He also explained the meaning of quantum leap (the movement of an electron from one orbit to another) and how scientists control and measure such events in the lab.
Madsen went on to explain how he had simplified and modified his own experiments in atomic physics at Wabash and began getting results this past summer. He and his students plan to build a magnetic field to slow down the reactions to better trap and study the atoms.
Madsen smiled when Professor of Theater Dwight Watson asked what physicists do with the atoms they trap.”
“You play, you observe it,” Madsen said. “Yours might be the perfect liberal arts question: Why do we do anything, but to inquire, to learn.” 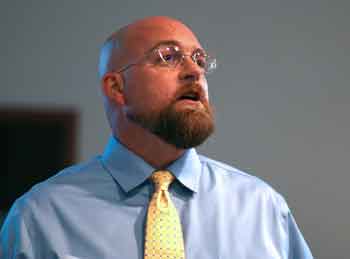 Assistant Professor of Philosophy Mark Brouwer discussed “The Pursuit of Truth in Plato’s Phaedo,” exploring  some of the paradoxes in the work and explaining his reasoning behind his interpretation of what Plato means when Socrates describes his “good hope” for an afterlife.
“Plato is not committed to the notion of virtue as an exchange for some eternal reward,” Brouwer concluded. “If you turn virtue into a reward, as most people think of virtue, you negate it as a good in itself, which is a way Plato sees it.
“Socrates is a myth builder. When he has Socrates speak of the ‘good hope’ of an afterlife, it’s not something you know, but something you hope for.” 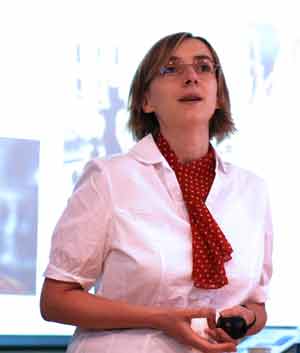 The dance to which Szczeszak-Brewer refers occurs in the fictional South American republic of Costaguana, where “from the doors of the dance hall men and women emerged tottering, streaming with sweat, trembling with every limb.” The scene that follows mirrors a sexual climax, and scholars debates whether Conrad is registering his disapproval of the behavior or using it as a device to protest the social conventions of Europeans of the day. Szczeszak-Brewer leans toward the latter.

“The sexualized dance scene in Nostromo is a sign of resistance against colonizers,” she said. “The extended metaphor of a communal dance undermines the social conventions of the day and anticipates the coming freedom.” 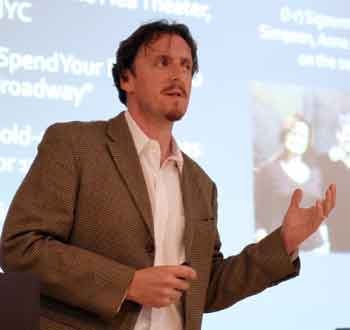 Assistant Professor of Theater Jim Cherry wrapped up the day’s presentations with a moving discussion of Anne Nelson’s play “The Guys,” which was the first theatrical production about the 9/11 attacks to be staged in New York. Cherry interviewed the playwright earlier this year.
“’The Guys’ premiered on December 4, 2001, and if you know anything about off-Broadway, writing and staging a play not even three months after the attacks just seems impossible,” Cherry said. “But they did it.”
The play starred Sigourney Weaver and Bill Murray and it sold out performances for 13 months, saving the Flea Theater from bankruptcy.
The Guys was based on Nelson’s encounter soon after the  9/11 attacks with a fire captain who had to write eight eulogies for his fallen men. The captain struggled to find the words, and Nelson, a journalist and professor at Columbia at the time, helped him. The play is a dramatic version of their collaboration. Nelson wrote The Guys—her first play—in 10 days.
Cherry said the performance of the play shed new light on theater as “a gathering place for community in a time of crisis.
“In the final lines of the play, the Captain reads his eulogy for Barney, one of his men. The audience becomes two things at once—a group of New York theatergoers sitting in the dark, and an imagined collection of family members at a funeral. This is theater as eulogy.”
“Sometimes trauma needs to be shared through language,” Cherry said. “Society was suffering and the play got people away from those images on CNN and MSNBC and into the theater together.”
Cherry quoted the playwright on her work: “The theme and intent of the play is to give comfort through language.”