The Ides of August — a decades-old tradition that brings faculty together at the end of the summer to discuss their personal scholarship and research — continued Friday with 17 faculty presenters talking on everything from course evaluation to African musical instruments.

The Ides of August provides faculty members the opportunity to share with their colleagues what they’ve been working on over the summer, on sabbaticals, or even longer-term research. 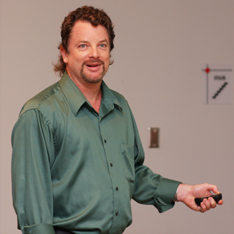 Some presenters talked about summer projects, like history professor Stephen Morillo, who got the first nine chapters of his new 28-chapter world history textbook written in the last couple of months. His presentation was fast and furious — about like his summer writing, it seems.

In the end, he’s hoping to drive a new way of thinking — a new way of analyzing facts and understanding world history — by providing students a “blueprint” that illustrates how the hierarchies, networks, and cultures throughout history intersected.

“Most people [who write textbooks] say, ‘This is what happened,’” Morillo said in conclusion. “I’m saying, ‘This is how it happened; this is why it happened.’” 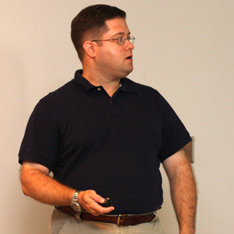 The study comes at a good time, he said, because the current faculty consists of the past, present, and future of the department — from long-time professor David Maharry, who designed Wabash’s computer science curriculum, to the department’s newest scholar, Chad Westphal.

Turner’s research involved surveying Wabash’s alumni who minored in computer science or majored in mathematics, as well as Wabash faculty, current students, and scholars in the field.

Turner hopes to use his research to rework and clarify the requirements of the Computational Mathematics track and the Computer Science minor, change some sequencing of courses, and begin to imagine how a Computer Science major might be constructed. 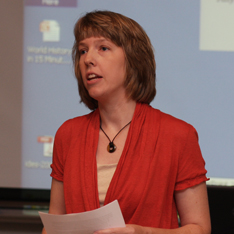 Rhetoric professor Jennifer Abbott spent her leave continuing a department-wide study of the Public Speaking course offered by the College. The review begin with a 2007 grant from the Center of Inquiry in the Liberal Arts, continued with discussions of how to better draw on the legacy of former faculty great William Norwood Brigance, on through last spring’s Brigance Colloquy, which brought to campus scholars from across the country for discussions on “Public Speaking as a Liberal Art.”

Abbott’s work will be picked up by her colleague Todd McDorman, who will devote his sabbatical to the review and followed by David Timmerman’s work in the spring of 2010.

The Rhetoric faculty are working on a white paper on the topic of teaching public speaking as a liberal art that will focus on a return to the classical Greco-Roman roots of rhetoric with an emphasis on the importance of rhetoric in a democracy.

While lots of ideas are being kicked around about how to restructure the course, nothing is concrete at this point, Professor Abbott said. Early discussions have focused on maintaining basic presentational land analytical skills necessary for good public speaking, but with added emphasis on listening with empathy and helping the audience fully understand the issues. “Considering the common good is as important as the success of the public speaker,” Abbott said.

The goal is to have the revised course in place for the fall 2010 semester. 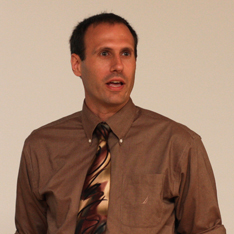 Psychology professor Preston Bost sent his six year-old daughter to school Friday morning contemplating her nervousness for her first-ever exam — a first grade spelling test. He said Emily was terribly nervous even though she knew the words on which she would be tested — “the Holy Grail Wabash students pursue — to know the content of the final exam,” he said.

He used the story about his daughter and her test to talk about how he has assessed the success of his revised Cognitive Psychology course (psych 311) — starting with the end result and working backward.

His argument is that if a course is well designed and its goals well defined, students — in theory — ought to be able to predict the final exam. The lesson for the teacher, Professor Bost explained, is to establish the end point or goals first, then proceed with course design.

“How do you define the finish line,” he asked. “Where do you want your students to be at the end of the semester?”

To assess his 311 course, he sent his students home with a journal article a week before the final and told them that the final exam would come from the article.

Before they began to take the actual final, though, Professor Bost had each student write five questions they thought might be on the final — based upon their reading of the article and work throughout the semester.

Eight of the 10 students who completed the five advance questions met the professor’s goals for their understanding of the course material. In short, they reached the finish line to a degree of success and essentially were able to predict the types of questions they’d be asked on the final.

Bost cautioned, though, that their understanding of what might be on the final did not necessarily predict their success!

The assessment did, however, help the professor understand the parts of the course that may require added emphasis in the future. 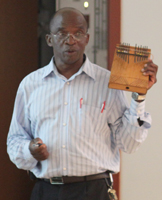 Music professor James Mukubuya presented his research titles Lokeme and Budongo Lamellaphones in Africa: An Examination of their Musical and Cultural Significance. He introduced the community to the lamellaphone, now popularly known as the thumb piano.
While the lamellaphone originated in Africa, it is now migrating to many other countries including the United States. The role of Mukubuya’s research is to document the instruments’ musical function, musical roles, contextual cultural significance, and construction process before they disappear. 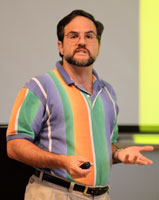 Political Science professor Paul Vasquez presented Beyond Kit-bag Smiles and Stiff Upper Lips: Explaining British Support for the First World War. He is currently working on a book chapter in connection with his dissertation. Senior Brad Casselman has worked as his research assistant.
His research centers on the theoretical implications of Britain’s support for World War I and the factors that contributed to their wartime support.
English professor Eric Freeze is currently revising a manuscript of short stories for publication. He explained as he began to select stories for the manuscript he looked for stories that had similar themes. The theme of his current manuscript is marginalization of men specifically in Alberta, Canada. 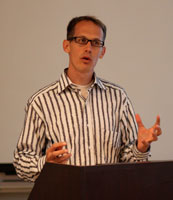 His presentation titled: Francis the Giant: Vision and Revision in Dominant Traits was a reading from one of his short stories about two young men doing research (with themselves as the subjects) on sleep deprivation. One of the men was the popular football star, the other a marginalized member of the class. The two ended up on a farm where they were castrating and branding cattle. It is Francis, the smaller, meeker of the two who ends up overcoming the football player as he is consumed by hallucinations due to lack of sleep.

Biology professor Amanda Ingram chronicled her journey through Queensland, Australia in search of the genus Eragrostis, a grass with more than 400 species. 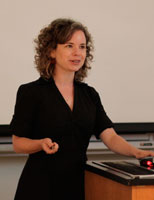 She described her “ingredients” for the Australian fieldwork including her field companions, transportation and living quarters (which were one in the same), the supplies they carried, and, of course, the plants they uncovered. While she had already found 40 of the species in previous fieldwork, her fieldwork in Australia found 40 more, several exclusively found in that country.
German professor Brian Tucker presented Freud’s Riddles. His research focused on Freud’s comparison of the self and dreams to riddles. While dreams may often look “absurd” on the surface, much like riddles, as one takes a closer look at the “pictures” of the dream, a coherent meaning emerges. 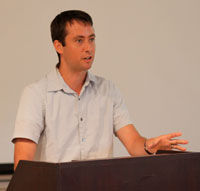 Tucker presented the “Rebus” or picture-riddle as an example. He showed several such riddles that appeared complex but often contained simple messages.