A Visit with Deon Miles 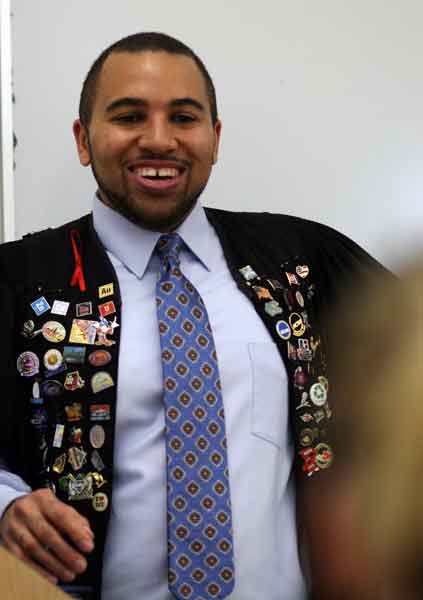 Steve Charles, Sewanee, TN (February 2009)—Just checking in from a road trip to Kentucky and Tennessee, where I’ve been interviewing and photographing alumni for the upcoming “39 Under 39” issue of Wabash Magazine.

The guy on the left here is Deon Miles ’97. Or, I should say, Associate Professor of Chemistry Deon Miles. (Click here for a photo album). In 1997 Deon was featured as our “Works in Progress,” having just given the Commencement Address, won practically every prize a chem major could win at Awards Chapel, been basketball manager for a team that included Chad Tabor and Josh Estelle, and mentored kids in the Malcolm X Institute’s KQ & K program. We titled the feature “Finding His Place at Wabash,” and Deon had done just that like few Wabash students we’ve known.
I spent four hours with Deon this week at the University of the South at Sewanee, and Deon has found his place there, too.
Back in 1997, Deon said in that same article that he hoped one day “to be a teacher at a small liberal arts college,” and that’s exactly what he does today. I had the pleasure of watching him teach an upper level chem class in Spencer Hall, Sewanee’s beautiful new science building that has the same attention collaborative learning areas and “serendipitous space” that were built into our own Hays Hall.
To call Deon’s teaching style active is an understatement. Never in one place for more than 10 seconds, never more than 8 feet away from the students, he moves from the dry erase board to the computer to the screen and through the room, watching his students to make sure they’re getting what he’s saying, keeping them engaged with questions, challenging and joking and then letting them come up with the answer. Visual, auditory, kinesthetic and tactile learning styles—Deon teaches to them all.
Even I could learn chemistry from this man! Deon earned tenure at Sewanee last spring—that must have been an easy decision for the Dean and tenure committee.
Professors wear academic gowns when they teach here. Deon has adorned his with what must be 40 or so pins of all sorts—“to take some of the heaviness out of it,” as he says, not wanting artificial space between him and his students.
Along with his teaching expertise, Deon brings Sewanee cutting edge research in nanoparticles, similar to the type Wabash’s Lon Porter works with. In fact, Deon and Lon have had some interesting exchanges about the research at conferences and by email.
My favorite story from Deon (I’ll try to get this right without going back to the tape): A freshman in his General Chemistry class came to his office after doing poorly on a test and “slapped a drop slip on my desk,” wanting to withdraw from the course.
“Not you,” Deon told her. He knew she understood the fundamentals of the course, she had both the aptitude and interest to be a chem major, in fact. But she’d hit an obstacle, felt overwhelmed by what she deemed a failure on one test. As Deon said a couple times during our conversation today, “I make mistakes, and so will my students. Everyone does.” And Deon thought this student was about to make another.
So he looked her in the eye and said, “No, not you. Maybe some of the others in the class, okay. But not you.”
The student didn’t know what to say.
“Why don’t you take this back, take the weekend to think about it, and if you still want to drop the class next week, see me then,” Deon told her.
Today that student is a junior and a chemistry major. I saw her in class today (she’s in a couple of the pictures in the photo album I’ll post with this blog.) She clearly enjoys what she’s learning. May have found her own place at Sewanee.
I hear it all the time from Wabash alumni talking about our professors: “She saw something in me that I hadn’t seen in myself before” or “He believed in me.” Deon says a Wabash professor did that for him. Now he’s doing the same for his own students.