I’m Always Surprised by What Interests Me

“I’m introverted, I don’t like to speak in front of groups, and I went to private schools growing up in San Diego, so I’d never even been inside a public school, much less one in inner city Nashville,” Lopez says during a break from his work as assistant director of the Center for Science Outreach (CSO) in the heart of Vanderbilt University Medical Center.

“Oh, and I didn’t really like kids. That was kind of against me.” 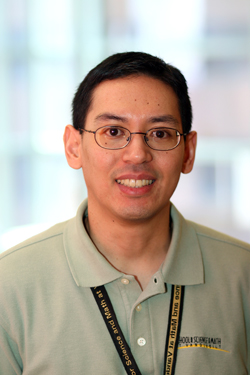 But the lab in which he was doing research with advisor and mentor Virginia Shepherd had received a National Science Foundation grant sending graduate students to work with middle-schoolers, and Lopez figured he’d need some teaching experience for the career in academia he was planning. So he gave it a try.

“I really enjoyed it—getting to know the kids, seeing how they could get interested in science,” Lopez recalls. “It was very unexpected—I’d had no interest in teaching, but that planted a seed.

“I’m always surprised by what interests me.”

That could be Joe Lopez’s creed, if the self-proclaimed “presbycathopiscopalian” had one. It was in force when he worked in theater at Wabash, when he pursued his Ph.D. in biology from Vanderbilt and his master’s degree in education from the Peabody School, and in his budding interest in finance and administration.

You get a snapshot of the yin and yang of Lopez’s universe when he talks about how he left, and then returned, to Nashville. With only his dissertation to finish for his Ph.D., he moved to Texas with his partner and, to pay the bills, took a job at a marine research center. That lasted two weeks.

“I was sick of research, tired of being in the lab.”

So he scoured the classifieds and found work as a tutor to third graders, a job that put him in the school’s new but virtually unused science lab. He got permission to bring all the third graders into the lab, and by the end of the year, all of the students at the school were “doing science,” an approach that drives CSO and its programs today.

“It’s no wonder many kids in this country aren’t doing well in science,” Lopez explains. “They need to do it hands-on instead of just hearing about it.”

For Lopez’s students in that Texas school, hands-on also meant planting a community garden, which was celebrated with a salad party at the end of the year.

Lopez finished his dissertation and moved again, this time to Jackson, Mississippi. When he couldn’t find a job teaching, he did research at the city medical center.

“And I was surprised to find that I enjoyed being in the lab again.”

But an email from Shepherd inviting him to return to Nashville to help start Vanderbilt’s Center for Science Outreach and to create a summer science camp for boys in the city proved irresistible.

And so did the camp.

“It’s called BEST—Boys Exploring Science and Technology,” Lopez says. “I wanted SCAB (Science Camp for Active Boys) but that was nixed. It was based on the girls’ science camp, but I did a couple of things differently. I think boys prefer to be loud, to be doing stuff.”

And, of course, blowing things up.

“The second year I was making root beer, and but I put in a little too much dry ice in and the cooler lid blew straight up and put a hole in the ceiling. Fortunately, no one got hurt, and I kept my job.”

In fact, Lopez’s responsibilities increased. He’s now co-investigator for CSO’s “crown jewel”—The School for Science and Math at Vanderbilt, a partnership between the medical center and Nashville public schools that brings high school students to the university for a “research-centered learning experience” for four years.

“We’re hoping it will be a national model,” Lopez says. “We think it’s something that universities with medical schools can do if they establish a real partnership with city schools.”

“I started learning about the financial side of the Center and the grant, and for some reason I
started enjoying it,” Lopez says. “So now I’ve planted that seed for the M.B.A. I joke about getting a degree from all 10 schools at Vanderbilt.

“In a way, I am the poster boy for the liberal arts. I think I’ve covered all three of the divisions at Wabash. And now I’m doing financial stuff that I thought I’d never care about—I don’t even balance my checkbook!

Eleven years after Wabash, Lopez says, “I’m not sure I have a career yet—I have a path—not a career path, but a path.”