You Can Go Home Again

Chatting with the guards at the metal detector in the John Sevier State Office Building in downtown Nashville or posing for photographs in front the expansive murals telling the state’s history, Tennessee Assistant Attorney General Ben Whitehouse ’99 seems preternaturally calm and relaxed.

Friends from his Wabash days will recall that unruffled, laconic demeanor. That Whitehouse is so much himself 10 years later near the center of the Volunteer State’s government puts it in a new light. Or perhaps an old, familiar one. 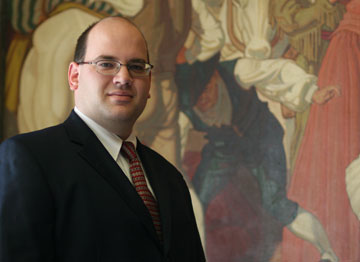 After attending college in Indiana, co-directing a Boy Scout camp in Germany, graduating from law school in Knoxville, and serving in the Navy’s Judge Advocate General (JAG) Corps in Texas, Virginia, Japan, and on the U.S.S. Theodore Roosevelt, Whitehouse has returned to the place where he was raised.

“Thomas Wolfe said that you can’t go home again,” I say, glancing at the gifts on his office wall from his Japanese hosts and his awards from the Navy.

Whitehouse eases into his chair behind the standard issue state government desk and smiles.

“I always knew in the back my mind that I’d move back to Nashville, but I wasn’t ready to settle down, and I didn’t want to go straight from law school to be married to some corporate firm,” Whitehouse says of the decision he made in 2003 to join the JAG Corps after earning his J.D. from the University of Tennessee. It was a way to practice law overseas, a decision influenced by how much he had enjoyed his junior year abroad in Aberdeen during his Wabash days.

Told he was too junior an officer to serve during the early days of the war in Iraq, Whitehouse jumped at the posting in Yokosuka, Japan. There he advised commanding officers, served as an observer in Japanese courts whenever an American was on trial, and began to receive the trial experience that would later make his resume so appealing to the State Attorney General.

But Whitehouse’s voice becomes most energized when he talks about life on the base in Yokosuka.

“It’s like your 1950s idyllic ‘Leave it To Beaver’ culture,” Whitehouse says. “It was like a big small town. I never felt more of a sense of community than on base. You were in community with your friends and the people you worked with. I heard many of my friends say they never their neighbors in the States the way they knew their neighbors on the base.”

The U.S.S. Theodore Roosevelt was a community of a different sort—a floating city of 5,500 sailors and officers, many of those 18-22 year olds away from home for the first time.

Whitehouse calls the cases he tried aboard the Roosevelt “mostly sex, drugs, and rock
and roll.

“I prosecuted drug cases from possession to distribution, and one guy for jumping off the ship, and a master at arms who would take credit cards sailors would leave accidentally at the ship’s ATM and ran up almost $40,000 on them.”

One of the most pressing issues was alcohol abuse.

“On the Roosevelt, the commanding officer put his foot down and said, ‘I’m not going to lose any sailors or let them hurt anyone while driving under the influence.’ He gave out his personal phone number when the sailors were in port and told them, ‘Call me collect, call me at 3 a.m, but don’t get behind the wheel.’

“On the flip side, we absolutely hammered the kids for DUIs—gave the maximum punishment.

“The CO occasionally got phone calls at 3 a.m., but realistically, all of this made a little bit of an impact, but not much.”

At his final assignment, working under an admiral at the Navy’s Safety Center, Whitehouse and his group put the emphasis on alcohol education.

Again, the effect was negligible.

“You’re dealing with young people who think they’re immortal, “Whitehouse says, “And these immortals have money.”

By the time his six months with the Roosevelt ended, Whitehouse was ready to come home.

“I was getting tired of moving, and I was ready to settle down.”

The word community pops up frequently in the conversation, even when talking about his work as an assistant attorney general.

“I enjoy handling the cases that have community impact,” Whitehouse says. While one of his roles is offering advisory opinions to the state legislature, including a recent brief one hand gun legislation, he also prosecutes white collar crimes.

“That community has traveled with me wherever I’ve lived.” —Ben Whitehouse ’99

“They’re not the sexiest and rarely draw the media attention of high profile cases. but in many ways they affect the public health more than a murder case,” he says, recalling his prosecution of a water treatment plant operator for falsifying his records.

Whitehouse’s community has always been larger than most, thanks to his connections to the Boy Scouts. In scouting since his “bobcat” days, he found a refuge in friends and leaders there when his father died when Ben was only 12 years old. He’s still a member of the Order of the Arrow, the organization’s national honor society and service group and stayed involved even at his Navy postings.

“That community has traveled with me wherever I’ve lived,” he explains.

His deep understanding of a young man’s need for a mentor led him to that work long before his Wabash days, and now that he’s back home, he’s picked up where he left off. Last year he brought three young men to Wabash for the Monon Bell Game, and a photo on his wall shows he and a group of smiling scouts after a week of backpacking near Tennessee’s Fall Creek Falls State Park.

Back in Nashville now for almost a year, Whitehouse recalls a recent conversation he had at a party with the mother of a boy he had mentored. She told Ben he had been the boy’s inspiration. The party was a celebration of the young man’s acceptance into law school.

“There’s nothing better than to see a kid grow up like that,” he says.

It’s enough to make Ben Whitehouse feel like he really has come home.