Glance at the board outside of Associate Professor of Chemistry Deon Miles’ office in Spencer Hall, the University of the South’s new $22 million science building.

There’s a cartoon celebrating Barack Obama’s Presidential victory. (The newly tenured Miles aspires to being president, too—of a college—and says he has a role model in the new African-American president of Hampden-Sydney.)

An article from Chemical and Engineering News explores the polymers in bowling balls. (“I love bowling”), while another explicates a passage from the New Testament.

Peek in the door and there are Wabash paraphernalia and photos from his College days across from paintings celebrating his African-American heritage and photos of his wife, Petrise, and two-year-old son, Noah Alexander. 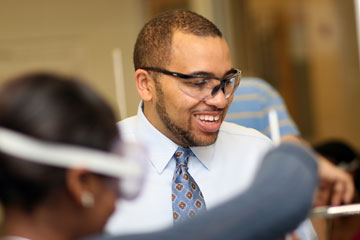 “I believe it’s important that students know who I am,” Miles says.

But walk down the glass-lined corridor to the small seminar room and you’ll learn what matters most to Miles in this place.

To call Miles’ teaching style active is an understatement. He wears an academic robe to class, as do all Sewanee teachers, but his is adorned with an array of colorful, sometimes humorous, pins.

“To lighten things up a little,” he says.

Never standing one place for more than 15 seconds, rarely more than 10 feet away from a student, he moves from the dry erase board to the computer keyboard to the screen and throughout the room, watching his students to make sure they understand what he’s saying, engaging them with questions, challenging, then joking, and then letting them come up with the answers. Visual, auditory, kinesthetic and tactile learning styles—Deon teaches to them all.

He’s destined to become a teacher’s teacher—one others look to in order to learn the craft. Already his course, The Science of Food and Cooking, was the cover story in the March 2009 Journal of Chemical Education.

“My goal is to teach at a small liberal arts college” Miles told Wabash Magazine in 1997, his senior year. He’s relishing that role now, whether doing research in his lab—where a paper sign at the entrance proclaims “Miles Institute of Nanomaterials Investigation”—or just walking across campus talking with students on his way to Sewanee’s food court/student center. The affable and easygoing young man from Gary, Indiana who found his place at Wabash is now making his students feel at home at Sewanee, Tennessee.

He tells the story of a freshman in his General Chemistry class who came to his office after doing poorly on a test.

“She slapped a drop slip on my desk,” Miles recalls. “She wanted to withdraw from the course.

“I said, ‘Not you!’” She had both the aptitude and interest to be a chemistry major, Miles believed. But she felt overwhelmed by what she deemed a failure on one test. 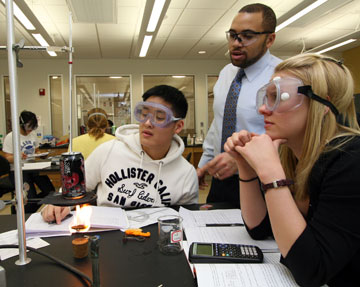 “I make mistakes, and so will my students,” Miles says. “Everyone does.” He thought this student was about to make another.

So he looked her in the eye and said, “Why don’t you take this back? Take the weekend to think about it, and if you still want to drop the class next week, see me then.”

Today that student is a junior chemistry major. During Miles’ class in the seminar room, she asks the most questions. She clearly enjoys what she’s learning. She may have found her own place at Sewanee.

Miles says he’s just passing along what he learned from his own teachers: “I had professors who saw something in me that I couldn’t.”

On the dry erase board in Deon Miles’ office, beside an 8” x 10” photo of his son, is a poster that reads: TEACH LIKE A CHAMPION TODAY.

Miles brings all that he is to his work at Sewanee, but his priority seems never in doubt.

“My primary responsibility as a faculty member at a small liberal arts institution is to teach my students well,” he wrote in an essay for the American Chemical Society newsletter titled “Defining Myself.”

“When it comes down to it, each of my students must know the same material as exam day approaches, regardless of my or their race. Though I believe my heritage, background, and ethnicity add an important dimension to my work, I am not limited by the description ‘black professor.’

“My African-American students may come to see me as a role model or an inspiration. Ultimately, my hope is that all of my students see me in the same light.”