Works in Progress: How Do You Guys Get Along

From opposite sides of the political spectrum, seniors Jay Horrey and Sean Clerget have forged a winning friendship—and an All-Conference doubles team—that would make Vic Powell and Ben Rogge proud. 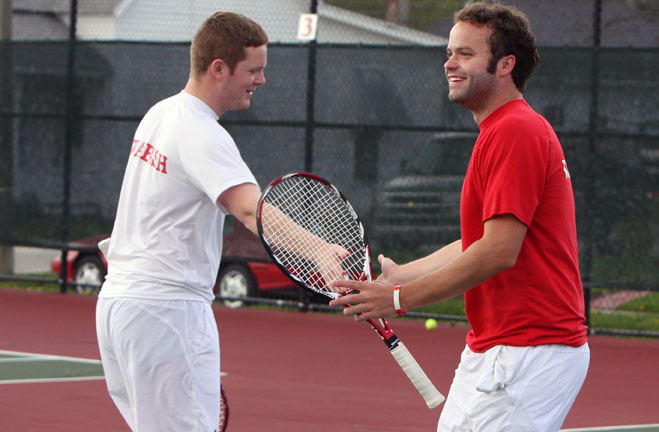 This one is about friendship.

It’s not about politics, though the two friends are passionately political.

This is a story about the Wabash tradition of building and sustaining lifelong relationships—friendships based on trust and honesty that endure over time.

Jay Horrey was an accomplished high school tennis player who spent his summers playing in tournaments across the country. Gordy Huncilman ’78, a family friend, urged him to look at Wabash, and when he visited during Honor Scholarship Weekend, he met another tennis prospect, Sean Clerget.

Neither Horrey nor Clerget was looking for a liberal arts college. And neither was even considering a college for men. But tennis coach Jason Hutchison convinced them both to seriously consider Wabash.

Over the last four years, they’ve become best of friends.

“But it’s funny,” Horrey says, “because people are always asking, ‘How do you guys get along?’”

For starters, they have a lot in common. Both are four-year tennis lettermen for
the Little Giants—Horrey won the most matches in Wabash history, earning first team All-Conference honors this year, while Clerget, as his doubles partner, was named to the All-Conference second team.

Both pledged Beta Theta Pi and majored in political science (though Horrey double-majored in economics, too). Both had David Hadley as their academic advisor and studied abroad as juniors—Horrey in Aberdeen, Scotland, and Clerget in Perugia, Italy.

And both are headed to law school in the fall, Horrey to Indiana and Clerget to George Mason.

But in a way, they couldn’t be more different.

Jay Horrey is a “bleeding heart liberal,” campaigned for Obama, and was president of Wabash’s Thomas Riley Marshall College Democrats.

Sean Clerget is a dyed-in-the wool conservative, edited the conservative journal The Phoenix, and had summer fellowships with two Indiana Republicans—Secretary of State Todd Rokita ’92 and Indiana Senator Richard Lugar.

“We don’t argue politics,” says Horrey. “We sat around and watched the election returns on CNN and we had good discussions. Sure, we disagree, but never to a point of contention.” 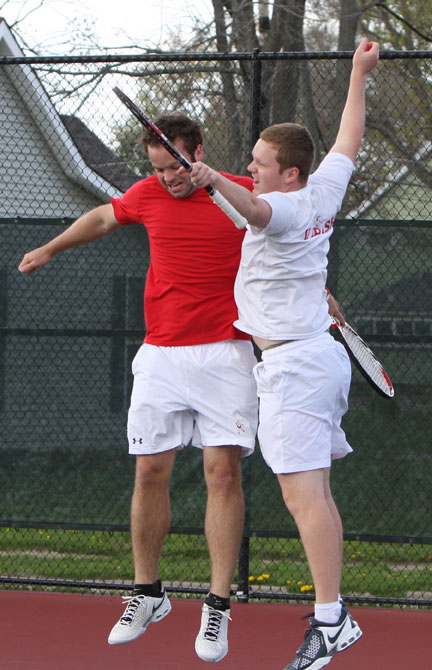 “I think we understand each other,” the Lafayette native says. “We focus on our common interests and not how we’re different. We talk about serious issues and agree to disagree.

“And we have a great time teasing and joking with one another. He’s a lot more fun now that he’s grown out of that prima donna number-one singles tennis player mode.”

Theirs is the type of camaraderie fondly recalled at Wabash, where friends Ben Rogge and Vic Powell could argue for hours around the table at the Scarlet Inn, then get up, shake hands, and agree to whip up another conversation the next day.

“Actually, I think I learned a lot about friendship from Adam Kirsch ’07,” Clerget says. “He’s now the executive director of the Marion County Democratic Party and we stay in touch. We both love Wabash, and we have a friendship that goes far deeper than politics.”

“What I most treasure about Wabash are the friendships I’ve made here,” says Horrey. “I can’t imagine developing these kinds of relationships at a bigger school.”

The friends have established their own traditions. Horrey, who grew up in New Albany, Indiana, in a family that loves the Kentucky Derby, pleaded with Clerget to attend the race during their freshman year. Clerget couldn’t imagine it could be much fun, and he didn’t want to give up a weekend to prove Horrey wrong.

“I finally said OK, and we went,” Clerget recalls. “I won a bet on the first race and was hooked. We’ve gone every year since.”

Despite their political differences, Clerget and Horrey share a common turning point during their time at Wabash—internships with firms that provide pro bono legal service to impoverished families.

Clerget interned last summer with Indiana Legal Services, helping to provide free legal aid to low-income people: “I was pretty sure I wanted to go to law school before, but that experience really did it for me.”

Horrey spent one summer with Jeff Been ’81, the executive director of the Legal Aid Society of Louisville, and another summer working for Frank Hagaman ’72 at his Partners in Housing agency.

“It was great to work around people who love their work and love the people they represent,” says Horrey, who thinks he’ll likely end up specializing in the financial side of the law.

Both men have been inspired by their Constitutional Law professor, Scott Himsel ’85, who practices law with Baker and Daniels in Indianapolis.

“He made me defend the Bush Administration’s right to detain suspected terrorists,” Horrey recalls. “As a liberal that was tough, but I know experiences like that will help me down the road.”

“I’ve taken all three classes Professor Himsel has taught at Wabash,” adds Clerget. “He’s great because he’s hard; you will be called out in class, ready or not.

“But everyone really wants to do the work, and a large part of that is because the issues we talk about in his class are all liberal arts in nature—literature, religion, politics, philosophy, human rights. He brings our entire education into the discussion.”

Asked separately to recall a favorite moment from their times together, both remember the same night during their studies abroad. They had met up in Ireland to travel over break and were finishing their trip in Dublin.

“We got back to our hostel pretty early, and we met these guys from South Dakota who wanted us to go with them to a pub,” Horrey recalls. Despite having flights to catch early the next morning—Sean at 6:30 to Rome and Jay at 7:30 back to Scotland—the friends tagged along.

“We probably just should have stayed up, but we opted to get some sleep,” says Horrey. “The alarm didn’t go off and Sean wakes me up, freaking out, at 6:30—he’s already missed his flight.”

Clerget’s parents expected to meet him in Rome that afternoon, so Sean had to scramble and pay more than $500 for a new ticket.

Horrey made it to the airport just in time.

“I like to refer to that story as Sean’s $500 bar tab,” says Horrey with an impish grin.

“I like to remind Jay that I did wake him up in time to make his flight,” counters Clerget. “But it still would have been a pretty expensive bar tab even without the airplane ticket.”