Forty-eight high school seniors from all across the country — and around the world — descended on the Wabash College campus Sunday, marking the 37th consecutive year of the Opportunities to Learn About Business Program.

The students will be on the campus through the week learning about the fundamentals of production, finance, marketing, and advertising.

OLAB Director Jim Amidon said selecting students for this year’s program was particularly tough, but that he was thrilled with the final results.

“It’s a terrific group of young people and I believe we selected the most diverse OLAB student body in the 37-year history of the program.”

Amidon said the Internet has resulted in students from all over the country applying for the one-of-a-kind program. Students in OLAB this year come from Washington, Texas, Tennessee, Illinois, Ohio, Maryland, Massachusetts, and two flew all night from Seoul, Korea to take part.

“It’s a good thing, I think, that we have the largest number of out-of-state students in OLAB history,” Amidon said. “We know with the Internet, the world is shrinking, just as we know that to operate a successful business in 2009, you must compete in a global market.” 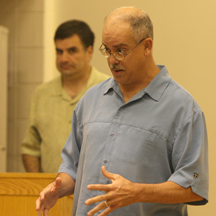 The OLAB schedule in 2009 is once again fast-paced and full of fun. Labbies, as participants are known, started immediately Sunday afternoon with a workshop led by Wabash Rhetoric Professor Todd McDorman, before diving headlong into production and marketing games led by economics professor Humberto “Bert” Barreto and Game-Master Greg Shaheen (photo right). Wabash economics professor Frank Howland will lead a session on stocks and the stock market.

The program, which is largely funded by a grant from the Goodrich Trust, enters its 37th year with the same instructional staff as last year, and with a veteran counseling group headed by Dean of Students Davey Neal. Neal is entering his second decade with the program.

“I can’t tell you how excited everyone associated with the OLAB program is about this year’s group. From the diversity of the class to the wealth of experience our faculty and counselors bring to the program, 2009 stands to be one of OLAB’s very best,” said Amidon.

Labor negotiations are the closest the students will come to life in the real business world when Wabash alumni lawyers, many of whom are labor contract negotiators, come to campus to teach the students — and work hard to get the best deal possible for their fictional employees.

Of course, there's also been time for fun, as well. Students have activities organized by the counseling staff every evening, and in the afternoons they take advantage of the Allen Athletics Center, computer lab, library, and pick-up games of Ultimate on the College Mall.

Later in the week, students will form into companies to compete in a computer simulated business world. All will produce, market, and attempt to sell handheld personal organizers in a competitive marketplace. The teams will be charged to differentiate themselves from competing firms, and build marketing strategies and advertising campaigns to drive sales growth.

“It’s a very full week,” said Amidon. “We try to instill in the students from day one that they need to pay attention, get involved, have fun, and think both critically, and creatively. Those are the keys to success and fun at OLAB.”