Psychiatrist Chris Bojrab ’89 presented Brain Biology and Behavior Before the Big Bash where he provided an introductory look at the advances in the understanding of neurobiology – the relationship between brain physiology and mood, anxiety, cognition, sleep, and pain. Bojrab began with some fun facts about the organ scientists know so little about – the brain. The brain contains approximately 100 billion neurons with between 1,000 and 3,000 synapses each which means there are between three and four quadrillion opportunities for information exchange.

If compared to the specs of a super computer, the brain is able to perform 10 quadrillion operations per second with a minimum storage of 1,000 terabytes of information or, as Bojrab said, "1.8 million years of DVD quality video."

Bojrab discusses the neurotransmitters in the brain – what each of them do and the side effects. He explained that while there are medications that can alter the different neurotransmitters, individuals vary significantly so no medication will react exactly the same in any two people.

The Teaching and Scholarship of W. Norwood Brigance
See a photo album from the colloquium here. Powell has traveled the country and presented her findings and recommendations to many groups in order to get some attention on the issue. She said, "Having two streams of care is not a recipe for patient safety and quality of care." Stephen Miller ’64 received his PhD from Princeton in Classical Archeology and began work as the director of a dig in Nemea, Greece focusing on the site of the Stadium of Nemea and looking for clues about the Nemean Games. His research has contributed to knowledge of ancient Greece and Greek athletics, as well as the modern revival of those games where participants from around the world step into history.

In July, 1974, after nearly ten months of digging, the group had still uncovered nothing at the stadium dig site. Miller recalled working with a student who was to log all the findings from that dig. She had nothing to do. Her last week there on the fifth and final day of the workweek they found the starting line of the track.

As digging continued for several years Miller uncovered the water channel, seating areas, an undressing area (the athletes competed in the nude), and most notably in 1992 the intact tunnel connecting the undressing area to the stadium.

In 1995, as a result of Miller’s work, locals formed the Society for the Revival of the Nemean Games. In 1996 the first revival games were held with competitors from all around the world. The games continue to take place every four years.

Miller ended his presentation to a packed room saying, "My interest in archeology that led to these discoveries and revival of the games began here in the fall of 1960." Doug Sparks makes one thing clear when talking about his small California winery: what he does is nothing like Napa Valley!

Sparks walked a big crowd through the wine making process and shared how he wants he wines to be different than others with a personal style. He shared several slides putting his 2,000 case-a-year winery in perspective compared to many other California operations.

But the highlight for the many alumni attending was tasting Doug's Suisun Valley and Dry Creek Zinfandel along with two vintages of his award-winning Barbera.

He talked briefly about wine shipping laws and how he has been frustrated for years unable to find an Indiana distributor to carry his wines. But he keeps trying and hopes to have his wine in Indiana shops soon. He recently picked up a distributor in Wisconsin.

His wines can be ordered from his Sunset Cellars website. 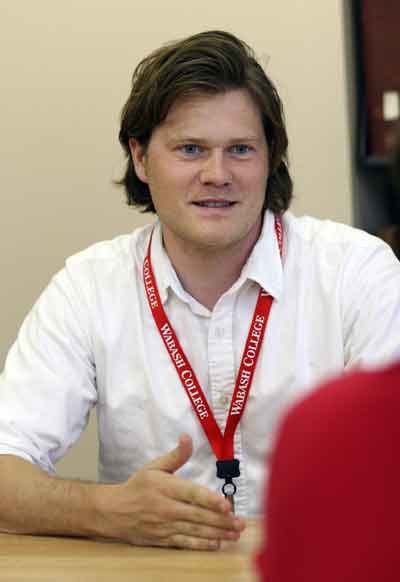 Michael Bricker earned his degree in architecture in Texas, he’s designed a house in Mongolia, and was recently in California promoting a movie for which he’d been production designer. But Bricker’s work may have its greatest impact right here in his home state of Indiana.
In his Saturday morning talk, “The Dome Project: Architecture as Activism,” Bricker detailed how he and fellow co-founder of People for Urban Progress (P.U.P.), MaryAnne O’Malley, had convinced demolition companies to help them “repurpose” more than 13 acres of teflon-coated roofing originally scheduled to be dumped in landfills when the city’s RCA Dome was demolished earlier this year.
Bricker called it a project that began with a question.

“I was driving by the dome one day [after hearing it would be demolished] and wondered, ‘What are they going to do with all that white material up there?”"
He had mentioned his musings to O’Malley, and in August of last year she called him.
“She asked if I was really serious about that question, and the idea of repurposing that material. I said, ‘Yeah.’ I had just finished a movie in Muncie and was looking for another project, so why not stay here and work on it?”
The roofing material itself has two layers, Bricker said. The inner layer is a canvas-type  material, and the outside is teflon-coated fiberglass.
“Both are completely inert,” Bricker said. “They’ll never decompose. Great for building, but in a landfill they would have been the same in 100 years as they are today.”
There were 14 acres of this material—enough to cover 11 football fields. So it was great material, and there was plenty of it.
“But was there any need for it,” Bricker wondered.
He and O’Malley approached the Indianapolis Parks Department.
“Turns out that they had a laundry list of projects that could use the material,” Bricker said. Those projects ranged from covering an outdoor soccer stadium and the Taylor Velodrome to making umbrellas for tables at city swimming pools.
“We really liked this idea,” Bricker said. “This dome had really become a landmark, like this white puffy cloud hovering over the city for 24 years—an icon of the city,  Now we would be spreading that material all over the city; in a sense, preserving that landmark, and one the public had already paid for.”
So Bricker wrote a “10-page beast of a proposal” and submitted it to the demolition company.
“And they bought it,” Bricker said with a smile, noting it wasn’t quite as easy as that sounds.
Saving the material required it to be taken down differently than the company had originally planned, but that change actually proved faster and cheaper for them.
Today, eight acres of the material is ready to be used for Indy Parks projects. Keep Indianapolis Beautiful received five acres for additional community improvements.
Bricker and O’Malley’s P.U.P. also received a little less than an acre. from which artist Cheryl Harnishfeger is making wallets, purses, and messenger bags. This "Dome Bag Project" is raising funds for P.U.P.'s other initiatives, which include improving Indy Parks, drawing attention to local artists and artisans, and raising awareness of urban sustainability issues.

“It’s been an amazing chance to see an idea through from beginning to end,” Bricker said. But P.U.P. is just getting started. A redesigned Web site, promotion of a car-sharing project and other “green initiatives are all on the drawing board for the group's future.
Read more about Bricker and P.U.P. at: www.peopleup.org Residing in Hong Kong for the past 15 years as director and chief investment officer in Asia for the eighth largest retail banking group in the world, Ray Jovanovich ’84 has had a front row seat to the extraordinary economic advance of China, India, and Southeast Asia.

But at his colloquium on Saturday, before discussing those economies and their impact on the future of the United States, Jovanovich spoke about where his career really began.

"Wabash was my Event Horizon," he said. "It all started here with my inaugural visit to campus."

Jovanovich read from a passage he'd written to honor his father, who died two years ago:

"My father was quick to recognize the significance of this place; a man who was basically illiterate when he was liberated by General Patton’s Third Army in the spring of 1945 after having spent 50 months in prison, captured early on during Hitler’s march across Europe.

"But his was a life rich in experience, and during our Parent’s Day farewell talk that warm August afternoon in 1984, he encouraged and admonished me to absorb as much as possible here. He proclaimed that Wabash would provide the foundation for my long road ahead."

That long road has taken him to Credit Agricole Asset Management’s Asia office, from which he travels throughout Southeast Asia looking for investment opportunities and studying economic trends. From those travels and analyses he sees both a bright economic future and plenty of challenges for China and India.

And he sees dark clouds on the horizon for the U.S. workers, not only from competition with these countries, but from what he deems the "greatest and gravest national security threat to the U.S.—the crumbling public education system across America.

"From Hong Kong I have the occasional opportunity to lecture in schools and universities in China and to meet students from India," Jovanovich said. "The tenacity, aptitude, and hunger of these students is impressive."
Jovanovich contrasted "well-prepared kids" of China and India, with "an astonishing sense of entitlement" he often sees in students in America.

"As if they have all of this coming to them," he added, pointing out the low test scores in math and science throughout the U.S. and the fact that our "chronic deficit of engineers in America necessitates importing talent."

"This is why Wabash and places like it are so important, especially when you look at the competition that’s coming.

"I grew up in Northwest Indiana; nobody knows better the impact of losing jobs and an entire industry," Jovanovich said. He added that "the achievement gap has to be reversed. We can’t accept it. The clock is running." An alumnus gazing at three photographs by Denis Kelly ’84 from his exhibit "Holy Lands: Journeys of a Pilgrim Artist," seemed puzzled by the grouping—Machu Pichu, the lost city of the Incas; the twin towers of the World Trade Center; the Amazon river flowing through Peru.

"Denis sure has an interesting way of putting photographs together," the man said, still trying to figure out how these three were related, and how any of them could be considered "holy lands," as the exhibit’s title suggested.

The answer to his question is to be found in Kelly’s vision, informed now by travels to four continents as he "seeks out people of prayer and places of special "Holiness."

"Recently I was part of a Franciscan-led pilgrimage group in Israel/Palestine—the Holy Land," Kelly writes. "The notion of THE Holy Land is provocative. Can all of creation be considered a Holy Land?"

For Kelly, clearly, much of creation is holy ground, and in his pilgrimage over 25 years he’s endeavored to see not only the holy places of his own Christian faith, but to see holy places through the eyes of those of different faiths and beliefs.

You can see the exhibit online at www.deniskelly.com