WLAIP Students Get Creative with Gaming The room is filled with the sounds of play. Frantic scribbles are drawn on paper, cards are shuffled and dealt, tokens and game pieces change hands, and every so often, the space echoes with shouts of laughter and triumph.

But this isn’t the back of a comic book store — it’s a Wabash Liberal Arts Immersion Program (WLAIP) module inside the Lilly Library’s Game Lab led by Professors Matt Weedman and Michael Abbott. 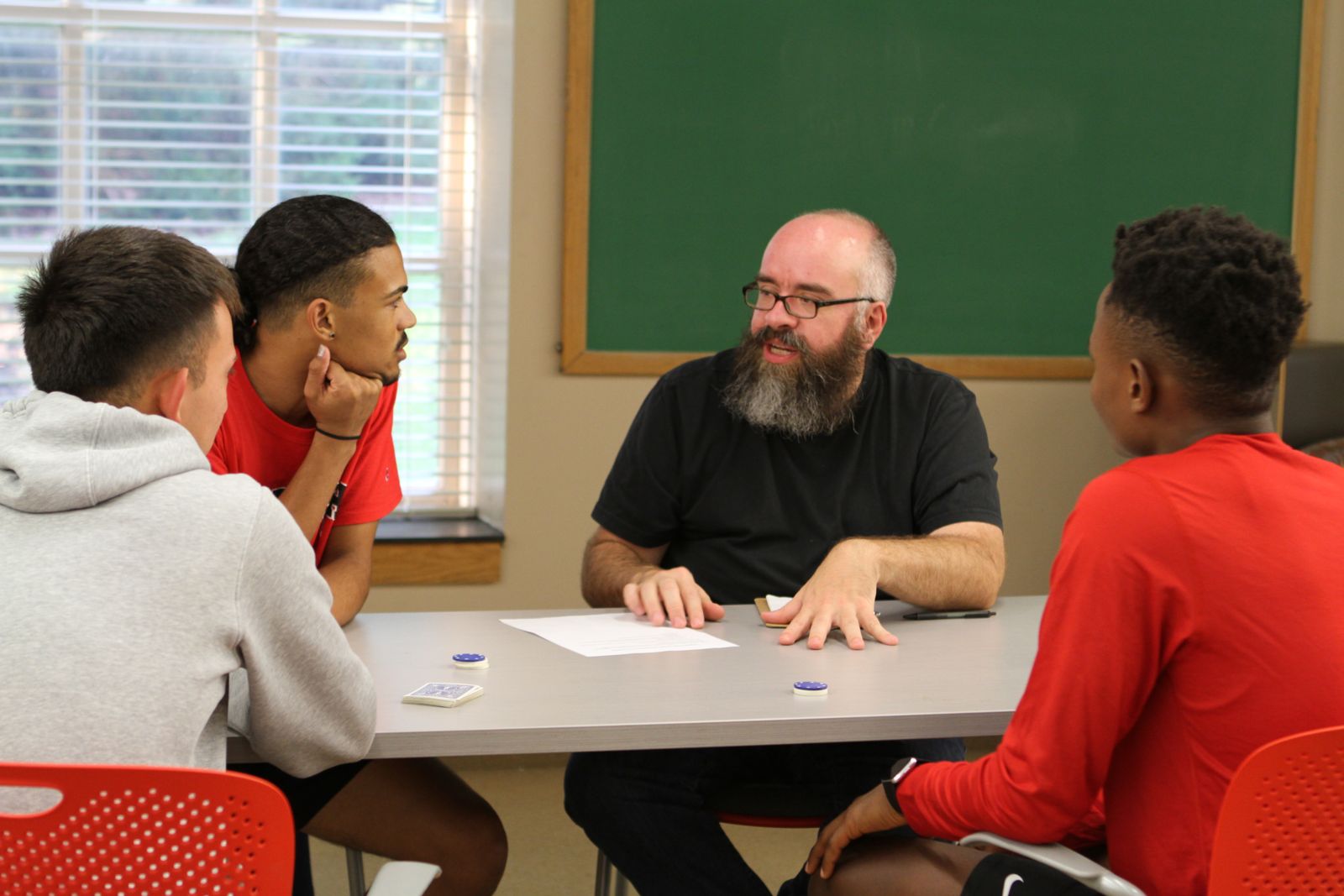 The duo challenged students last week to collectively create an original game which they designed, play tested, and rolled out for others to try outside of the class.

The rules were simple: the game must be playable by at least two people, it may feature up to three game pieces (ball, timer, dice, cards, for example), there must be a win/lose state and it has to be easy to explain and play.

Board games are the perfect classroom tools for helping students with critical thinking, problem solving, and more, Abbott said. They allow students to understand the mechanics that make games playable.

“Every Wabash class these students take will ask them to think and understand how systems work — that could be with literature, a petri dish, anything,” Abbott said. “If they have the skill to be able to dig into the mechanics of gaming and figure out what makes a good design versus a not-so-good design, then they are thinking analytically and critically.

“Games are fun but can be taken seriously,” Weedman added. “Students begin to realize that, ‘Oh, if I look closer or ask these questions, then all of a sudden I see and discover things I never recognized before.’ You expect that in chemistry, but you might not expect that in a card game. But the two can relate, and that gets at the Wabash mindset.”

Students “dug in pretty hard,” Abbott said, and were quick to come up with a design for a simple game that embraces core game design elements.

“It’s interesting to me that no one has come up dry,” he said. “They said, ‘Let’s do this,’ and were able to come up with really creative games right off the bat.”

In one game, called “Don’t Get Caught,” players were split up into two teams and were challenged to write down as many countries as they could on a piece of paper within eight minutes.

The game was divided into two playing times. The first five minutes were designated as the “test run” where players could not use outside help unless they played a designated poker chip to do so. The last three minutes were designated as the “last chance to win” where players could go all out — look at their phones or the other team’s paper — to get as many answers as they can written down before time is up. The twist is you cannot get caught cheating by the game leader. If you are caught, points are deducted.

The team with the most countries (one point per country) won the game.

“That was a little complicated, but pretty fun,” Luis Rivera ’25 said after playtesting “Don’t Get Caught.” Along with his teammates, Rivera answered questions and offered feedback to the student designers in an effort to help them improve the interactive game.

Rivera, a native of Wake Forest, North Carolina, who has interests in psychology, said he enjoyed participating in the game design module and appreciated the creative freedom professors gave students.

“We got to really express ourselves,” Rivera said. “It was a nice break from essay writing and some of the other activities we’ve been doing. I liked being able to step away from that and do something completely different that makes my brain work in a different way.”

Reflecting on the WLAIP overall, Rivera said he would encourage other students to take advantage of the program before starting their first semester in August.

“Academically, this experience has changed my whole view of everything I am doing. I turned in the best writing of my life in the last week. It was pretty scary when I got my first assignment. I thought there was no way I was going to be able to get everything done,” Rivera said. “Now that I did it, I feel more confident in what I can accomplish here as a student.”

“It’s a lot of hard work, but it’s definitely worth the hard work,” added Bruno Zamora ’25, from Hammond, Indiana.

Funded by Lilly Endowment Inc., the Wabash Liberal Arts Immersion Program is designed to help students of color, Pell Grant recipients, and first-generation college students adjust to campus life. The program includes a month-long Summer Institute during which students participate in classes and complete their first college credit in either English composition or public speaking. It also provides students an opportunity to engage in special information sessions and networking events during their freshman year, and a second summer internship, research assistantship, or immersion experience.