With limited doses of the novel coronavirus vaccine, who should be prioritized in the United States to get it, and what factors should be considered?

Formulating an answer to this question in the middle of a global pandemic can be perplexing, but Wabash College biology professor Dr. Anne Bost, who specializes in viruses and bacteria, wanted to push seven high school seniors participating in the College’s virtual Scarlet Honors Program to think critically on a Friday afternoon. And each of these prospective students was up for the challenge.

“Maybe our political leaders first,” one student began, “because if they do get infected and have to sit out, who is going to be running our country?” 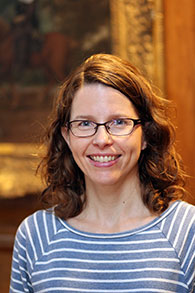 “People in hospitals working with COVID-19 patients should get it first,” another contributed to the debate. “It’s kind of like the thing you hear on an airplane — if you have a child and something were to happen, you have to put on your mask first and then help the child or another person who is incapable of putting it on themselves. We can’t beat this if the people who are actually supposed to be giving the vaccine and helping those with COVID, contract it.”

“As you can see, this is a complicated, multi-disciplinary question. Part of this is hardcore science, but part of it are these social, political and cultural questions that I hope you'll keep thinking about in terms of what is fair and right,” Bost responded to the students, who joined her ‘Vaccines’ Zoom class.

More than 300 prospective students and their families, representing 20 states and 17 different countries, participated in the Scarlet Honors Program this past weekend, a three-day event designed to give seniors a hands-on opportunity to see what being a Wabash student is like. Students got to virtually meet President Scott E. Feller, engage with their classmates, and participate in one of more than 40 diverse class sessions taught by faculty.

Additionally, each student was awarded a $1,000 scholarship that is renewable for four years. Some also earned full-tuition scholarships for participating in Scarlet Honors. In all, Wabash College awarded over $2 million in financial aid to future Little Giants.

“Everything we do at Wabash is student centered and student focused,” Feller told the prospective students before the group broke up into classes. The President shared Wabash’s story of having to close campus and switch to virtual learning this past spring, before bringing students safely back for in-person learning this semester.

“We welcomed all students back this fall, and 97% of 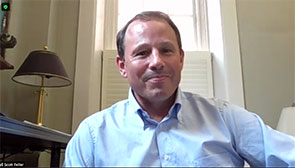 Previously, Scarlet Honors weekend would include an array of in-person events from students staying on campus for two nights to dining with faculty. That couldn’t happen this year due to the pandemic, so Wabash leaders had to get creative and come up with a program that would showcase the school and its possibilities for students.

Chip Timmons, Dean for Enrollment Management, said even in an online setting, the program was a success.

“A common response from the event survey was, ‘My interest in Wabash increased,’ and we got a few of my favorites like, ‘I plan to enroll’ or ‘Our son plans to enroll,’” Timmons said, noting that historically, about 60% of students who have participated in Scarlet Honors end up enrolling at Wabash College.

“The response from our faculty has been overwhelmingly positive,” Timmons added. “Like us, they were confident the program would be successful and the students attending would be engaged and eager to learn, but until we started the first Zoom meeting, we would not know for certain.”

After reading reflections submitted by students, Bost would agree that the weekend was a hit.

“One student said, ‘I got what I came for’ and felt like he was kind of testing the waters and that Wabash essentially passed the test. Another student said he loved the level of engagement and that he talked more in this session that he had in any high school class,” Bost said. “I don't know that they'll all choose to come to Wabash College, 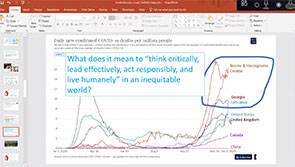 but I hope that if they do, then they know what to expect.”

Economics professor Dr. Eric Dunaway and psychology professor Dr. Eric Olofson were among a long list of faculty members who volunteered to teach courses over the weekend for the Scarlet Honors Program. Both said they were encouraged by the level of engagement demonstrated in the virtual classrooms.

“I know we just finished with finals, and most are exhausted, but to see the energy of these prospective students — they want to get into this stuff,” said Dunaway, who taught 'The Law and Economics of Big Data' alongside Dr. Nicholas Snow. “They really want that classroom experience, and some are missing it.”

“I have come to expect that the students that Admissions brings in are the kinds who are going to thrive here. They really know what it takes to be successful,” said Olofson, who taught three sessions related to fatherhood titled ‘Hidden Benefits of Playing with Dad.’ “The guys I had in the class felt like Wabash students.”