Behind the Mask: Malcolm Lang ’21

What is there to do for an English major who takes an internship at a health department? 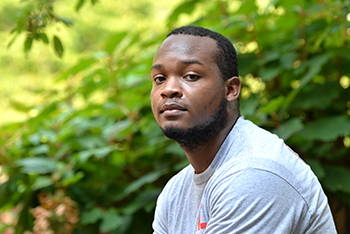 “Quite honestly, the internship wasn’t my first choice,” Lang said. “I was looking more at being a writing tutor, but most of those internships were remote, and I wanted to be more engaged.”

Like distributing masks and hand sanitizer to protestors in the city of South Bend.

Lang learned about the opportunity with the St. Joseph County Health Department from Global Health Initiative (GHI) Advisory Committee member Sam Milligan ’68. Pre-Med advisor Jill Rogers told Lang that he didn’t have to be in the GHI, want to be a physician, or even major in biology to take the internship.

“I was nervous at first,” Lang said, “but I quickly learned there were other ways I could help.”

Like drafting a resolution for the board of health that detailed the ways systemic racism affects healthcare.

“There is no better foundation for public health than a liberal arts education,” St. Joseph County Health Officer Dr. Robert Einterz ‘77 said. “We need those individuals because there are so many other things that make up the health of a community—poverty, food access, education—that aren’t related to science. In fact, science only makes up about 20 percent of what we do.

“So when Malcolm came to us, it was very exciting. He was pretty quiet and introverted, but he was someone who was going to be attentive to the other 80 percent.”

When asked about highlights from his internship, the previously-mentioned opportunities only scratched the surface for Lang. 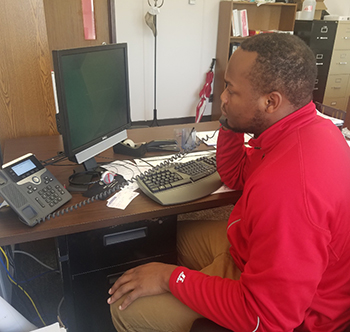 “My primary focus was to build a connection and rapport between the health department and the local Black Lives Matter movement to address issues regarding healthcare inequities,” Lang said. “Although my work did not necessarily address the issues with corruption in the criminal justice system, it did enable me to tackle other issues that directly affect a community.”

He helped administer a meeting between St. Joseph County Health Officer Dr. Robert Einterz and the leaders of the local Black Lives Matter organization to discuss the health department support for their cause and also the inequalities communities of color are experiencing, including EMT access, trauma-informed care, and mental health services.

Lang worked with Fetal Infant Mortality data within the black community of St. Joseph County and learned to assess the disparities in prenatal care, healthcare access, and the health of pregnant women in general.

Using his black studies minor as a foundation, he spoke with teenagers in a juvenile detention center about the history of mass incarceration and systemic racism. He shared that they don’t have to be a product of their environment or the previous decisions they’d made.

“This internship showed me that, regardless of who you are, you are capable of helping in different ways. I think my journey as a young black man now is to continue to do my part in fighting for change.”

He wants change on campus—for students of color to not feel they are always the ones who have to step outside their comfort zone. His brothers at the Malcolm X Institute of Black Studies think he’s capable of leading the change; they voted him as the Outstanding Member of the Year for 2019-2020.

He wants change in Crawfordsville, where he often sees the confederate flag flying.

He wants change throughout the country. That’s why he took the initiative during his internship to make sure that protestors in South Bend were safe.

“Who knows how long COVID-19 will be around, but the problems of police brutality and systemic racism have been around long enough. So while people were protesting, I wanted them to be safe. I wanted to ensure that they’ll be able to protest the next day, six months, or even a year from now.”

“While Malcolm is a quiet, gentle soul, his impact and influence is strong,” said Dean for Professional Development and MXI Director Steven Jones ’87. “He is a young lion who will make his mark on the world.”

Lang’s willingness to take initiative for something he believes in will serve him well in his new position on campus as a leader for Wabash’s COVID Action Response and Education (CARE) Team. His primary role is to proactively educate, respond to, and encourage fellow students to follow public health guidelines.

“We’re in a place where we can make the best of this situation,” he said. “We have the opportunity for students to realize what a privilege it is to be on campus, and I hope my fellow students know that. Because there’s no other way I’d want to spend my last year of school than on campus with my brothers.”