Mikek a Professor Who 'Wanted to Learn a Little Bit More'

During the Virtual Awards Chapel on April 23, then-Dean of the College Scott Feller used 107 words in an empty Pioneer Chapel to announce the 2020 winner of the McLain-McTurnan-Arnold Excellence in Teaching Award was Associate Professor of Economics Peter Mikek.

“I’m not used to seeing my face on the screen,” Mikek said, remembering watching the webcast from home. “It was just a big surprise. I didn’t know what to say. ‘Oh, that’s me! That’s me!’”

The announcement was completely different, but the impact was the same. A day or two later came a different set of feelings. 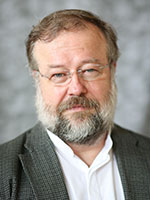 “I must be doing something right,” he said. “It felt like a confirmation of what I’ve been trying to do for years. In some sense, it was validation and it started to feel really good. It’s also a little bit humbling. There are a lot of really good teachers at this college.”

A measure of suspense surrounds the award’s announcement, since the winner’s name is traditionally the final two words uttered in the introduction. While acknowledging that this year’s winner generally avoids the spotlight, Feller also illuminated two aspects of Mikek’s outstanding teaching, saying “(his) lectures are not grand productions, but rather are rich conversations. Our winner is known for being exceptionally generous with students and exceptionally patient.”

Such characteristics are often on display in the classes Mikek teaches. Macroeconomics is his favorite, but he can be found leading discussions in many others – Money and Banking, International Finance, Economics of the European Union, Comparative Economics Systems, Econometrics, or Economics of Latin America.

“I love macro,” said the fifth economics professor to win the M-M-A. “The world is happening on stage right there for you. This is not disassociated from so-called real life. I don’t pretend that what I teach is the only holy thing in the world. That’s why I enjoy regularly contributing to senior seminar and other college courses.”

Mikek’s love of economics has roots in his native Slovenia, where he grew up seven miles from the Austrian border. When he was younger, the questions may have been simple, like what’s happening there? But as he grew older, he became aware of how resources shape peoples’ behaviors and started asking questions about monetary policy and its long-term effects.

Not unlike some Wabash students, it was a professor’s comment after an oral exam as a junior in college that pushed him toward a career in teaching.

“At the end of the exam, he stood up, shook my hand, and said, ‘I really appreciate your example,’” Mikek explained. “I thought, ‘Oh, perhaps I’m thinking the right way.’ That was the moment I realized I wanted to take more econ, wanted to learn just a little bit more. This is something I really want to know.”

Mikek joined the joined the Wabash faculty in 2004. Early in his tenure he received some advice from long-time political science 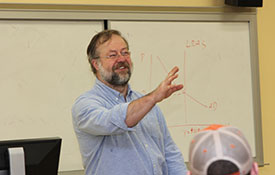 professor Phil Mikesell ’63 about teaching – care for the people you engage – that remains the foundation to his classroom approach.

Awards like the M-M-A are quite a validation for any Wabash professor, but Mikek was happy to share the credit with his colleagues.

The current edition of the “Wabash On My Mind” podcast talks to Associate Professor of Economics and 2020 winner of the McLain-McTurnan-Arnold Excellence in Teaching Award Peter Mikek about his approach to teaching and how the award shapes that approach moving forward. Just click the red arrow in the graphic below to enjoy the conversation.