Michael Tanchevski is a first-generation college student, the son of Macedonian immigrants. His father came to the United States with Tanchevski’s grandparents; he finished high school and immediately started working. His mother came over speaking very little English, so she got a job as a custodian at a hospital.

In March, Tanchevski was awarded the NCAA’s prestigious Postgraduate Scholarship. The award is given to student-athletes in their final year of intercollegiate athletics competition who excel both academically and athletically for use in an accredited graduate program.

The scholarship will provide Tanchevski with $10,000 to bring his family use toward his tuition at the Marian University College of Osteopathic Medicine this fall, giving his family a beautiful full-circle story. 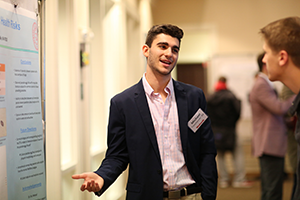 “This is such a big thing for my family,” Tanchevski said. “They worked blue-collar jobs forever, busting their butts their whole life for their children. Seeing all the hard work they put in and the hope they had for me to succeed? This isn’t something I did for myself—it’s something I did for my parents and grandparents.”

A native of Crown Point, Indiana, Tanchevski knew that school was always at the top priority list. But soccer was right up there with it.

Tanchevski has been playing soccer for as long as he can remember. He played throughout high school and started getting interest from Division 1 college coaches.

“I went to high school with Stojan and Spase, and they were the ones who really introduced me to Wabash and who ultimately got me here. I wanted a place where I could have the best of both worlds—soccer and academics. Stojan and Spase would constantly tell me, ‘This place is awesome. You’ve got to come here.’

“And this is the place I needed to be.”

However, early in his freshman year, Tanchevski tore his ACL and missed the entire season.

Even though he knew he could come back, one of Tanchevski’s worlds was gone at a time when he really needed it.

“I was in an identity crisis,” he said. “I came to college wanting to play soccer—it’s part of who I’ve always been. Having that stripped from me for the first time in my life... it took a lot of time, reflection, and trying to define who I could be outside of soccer…what Wabash could be.”

Tanchevski spent his year on the sidelines focusing on how to be better: a better teammate, a better leader, a better student, a better man. He found other things to get involved with on campus, which is when he found the Global Health Initiative (GHI).

Although he was already on the Pre-Med track, becoming involved with GHI gave him the opportunity to take an immersion trip to Peru his sophomore year and work at Crawfordsville’s Recovery Rec Center, a safe place for those struggling with drug addiction.

“One of the biggest things I’ve come to understand in my time at Wabash is the need for empathy—especially as a physician. In the healthcare field, there will be patients who are in really vulnerable positions, and I’m going to make sure they know I’m not there to just do my job. I’m there for them.”

“I might not have understood their situation, but I wanted them to know there were people who cared about them, their recovery, and the effort to break the stigma surrounding addiction. I might have not experienced what they have, but I could offer a helping hand. I could sit and listen.”

He brought the same mindset to the soccer field when he became captain. 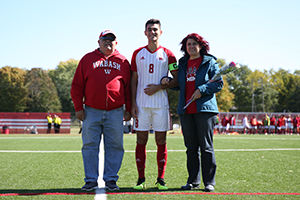 The captain’s green arm band Tanchevski was given his junior year meant he would need to be an advocate for his teammates. From then on, so much of what he did would be with his teammates in mind.

And he knew exactly what it looked like to live with others in mind.

“In 2019, when I was at the All-American banquet with my dad, he was just so excited,” Tanchevski said with tears in his eyes. “I was able to see how proud he was of me and everything I had worked for.

“But every opportunity I’ve been given is because of the opportunity he and my mom took when they came to the United States, the work they put in back then, and the work they’ve continued to do to get me to where I am now.”