Four years ago, Bilal Jawed ’17 was assisting a clinical drug trial for treatment of cryptococcal meningitis in patients with HIV while on a summer internship through the Wabash Global Health Initiative (GHI) to Kampala, Uganda.

Yes, he had a white coat with his name on it, but he’s quick to mention he always explained to patients in Ward 4C of Mulago Hospital that he wasn’t a doctor. It was never a problem for them.

“Working the wards were some of the most fun and hardest things I’ve ever done, he says.

Perhaps there is a little bit of magic in that white coat. Magic in the form of presence. 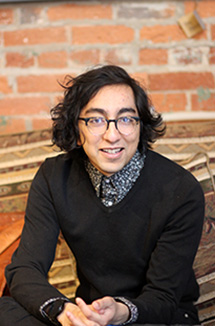 his term in global health, it’s called accompaniment,” says Bilal, who is finishing his second year at the Indiana University School of Medicine. “It’s not leading, it’s not following, it’s being right alongside people in their suffering. I try to hold that ideal as closely as I can. I wasn’t there to show off or be a doctor, I was there to be a human and help in any capacity I could.”

This summer, Bilal returns to east Africa – to Kenya this time – as a Slemenda Scholar through AMPATH (Academic Model for Providing Access to Healthcare), a partnership between IU and Kenya’s Moi University that serves more than four million people at 500 clinical sites throughout the nation along the Indian Ocean.

Two Slemenda Scholars are selected annually in the highly competitive process. Winners spend about three months in Kenya in what could be described as sustainable health care. AMPATH emphasizes systems of care and healthcare delivery, as well as research and training. There is a cultural and educational component for Bilal; he will learn Swahili.

It’s what he loves, which is why he applied.

Bilal works hard never to lose sight of the whole person even when he’s concerned with vessels and nerves, or memorizing each of the 87 known bacteria, their pathology, histology, and necessary treatments. That’s true even when he’s in Crawfordsville, Muncie – where he is currently taking classes – or Eldoret.

He serves as a student leader at the Healthy Lifestyle Center. A collaboration between the IU School of Medicine, Ball State, and Meridian Health Services, the goal of the HLC is to help clients take ownership and understand how tweaks to factors like diet, exercise, and mental health can dramatically improve personal health.

“When we see patients, it’s incredible,” Bilal says. “We want people to come in when they are healthy and address the goals they want for their health. The goal is to bridge the gap between providers and outcomes. I love being able to work with my hands and see patients.”

Bilal is comfortable in conversation. He mentions how talking with a patient about diet spurred him to ask about a meatloaf recipe. The question opened a door to a better understanding of his patient.

“I’m always starved for new experiences. If there is a chance where I can learn something new about a person at the sacrifice of studying a little bit, I will always take that opportunity,” he says. “That is an essential part of my training. The physician I want is not someone who aced all their exams, but someone who will take care of me and work hard to find the answers. That’s also the physician I want to be.”

While thinking ahead to Kenya, Bilal realizes he was shaped by his GHI experiences that took him to Peru, Uganda, and work with the Montgomery County Health Department in Crawfordsville. He marvels at the thought of a 19-year-old kid flying to Kampala and the complexity of the patients he encountered.

“What other program puts students on the front lines?” Bilal asks. “I was living in Uganda by my 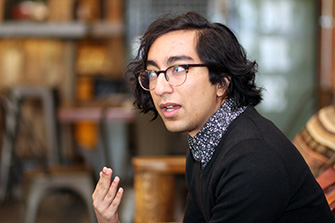 self. I’ve seen more cryptococcal meningitis patients than most American doctors will see ever. It’s hard not to have insight on global health when I’ve been shoved into these incredible experiences with (GHI director, Eric) Dr. Wetzel.”

In fact, Bob Einterz ’77, AMPATH co-founder, says those exposures were essential to Bilal being considered for the program.

“The experience there at Wabash does inspire the values that we’re particularly looking for in individuals who are willing to dedicate their career to addressing inequities and access to care,” says Einterz, the Associate Dean for Global Health at the IU School of Medicine. “He has a foundation already, so it would be my expectation that he is now taking the next step up the ladder. The experience (in Kenya) will help solidify his understanding, will help him discriminate a little bit more about some of the things he’s been taught, as we all are, and analyze a little more, understand a little more, and figure out in his own mind what’s right.”

Bilal knows his medical degree isn’t an end point, but a tool to enable him to do the work he chooses. Accompaniment has benefitted him as well as the patients he’s served. Each interaction has given him a clearer view of what he needs before he gets out there for good.

“When I wear the white coat, I think of every person, every individual, every patient, every professor who has helped me get every stitch and patch into it,” he says. “It’s a responsibility. I feel like I owe it to the people who invested so much in me to try and pay it forward. I’m grateful for each opportunity.”