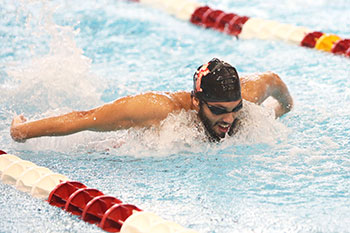 Sam Colaiacova ’19 didn’t know how to swim until he was in sixth grade. He finally decided to learn so he could attend pool parties in his hometown of Boca Raton, FL.

Now in his third year on the Wabash swimming and diving team, Colaiacova says the challenge of swimming is part of the fun. Well, that, and the dad jokes he always tells on the pool deck.

Q: What do you enjoy most about swimming?

A: It started off with the social aspect. I felt like it was a great way to connect with people. Swimming’s not easy, so everyone is going through the same thing, and I feel like there’s a good connection there. I also like knowing that not a lot of people can do it. I feel like I’m special to be able to swim in college because a lot of kids on my team didn’t have the opportunity to, and I thought they were better swimmers than me. But I’m here now.

Q: What is it like working with your head coach, Brent Noble?

A: He’s probably one of my best friends. He’s definitely been a figure that I have to give a lot of credit to for not only my athletic career but my personal life, too. He’s helped me through a lot of hard times, and I really look up to him. My freshman year was really rough. I hadn’t adjusted to being away from home, classes were hard, and I wasn’t swimming like myself. I remember asking myself, ‘Is it worth to be this far from home just to be slow?’ Coach Brent talked to me, settled me down, and I’m a lot happier swimming now.

Q: Is there a routine that you go through before each of your swim meets?

A: I warm up an hour before my first race. Then I will sit down for 20 minutes and listen to one song, normally one by Travis Scott to calm me down. After that, I’ll try to make a joke. We’ll do our locker room routine, and then I try to get back in the pool right before my race. A lot of people like to relax before their first race but I want to be in the pool and get a good feel for the water. 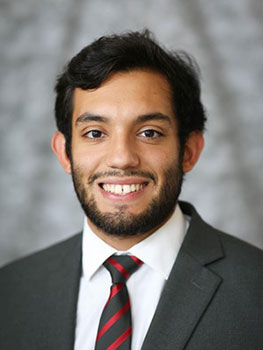 Q: What types of jokes do you tell?

A: (laughs) They’re called dad jokes, I guess. They’re not very “ha ha” funny, but they’re pretty funny to me. It’s like, ‘What type of bagel can fly? A plain bagel.’ That’s my type of humor. I like being happy when I swim. My teammates really don’t like to hear it, and I haven’t looked up any new jokes in a while. The freshmen haven’t heard it, so I’ll tell them.

Q: What has your Wabash swimming experience been like so far?

A: It’s fun, but it’s hard at the same time. It brings a lot out of me that I never thought possible. It’s demanding, and it makes me rethink how I swim in general. When I first met Coach Brent, he asked me why I wanted to be here. I told him I want to be a part of something special, and Wabash hasn’t been anything short of that.

Q: You don’t shy away from challenges, do you?

A: No, not at all. And that’s part of the reason I came here. I’m all about experiences. My parents thought this was a good idea because I’d never really gotten to experience something like snow! So this has been great for me to experiences the seasons changing and to be away from home.

Q: Do you remember seeing your first snow?

A: Yeah! It was a Saturday morning, and we were hosting the Woehnker Invitational. I looked through the big windows in the pool and there was snow falling! I was like, ‘Whoa! Look at that!’ Anthony Repay, who was a junior at the time, said we should go outside and check it out. We went outside in our Speedos, and I remember thinking that it was not as exciting as I thought it was. It was pretty cold, too.

Q: If you had to describe yourself, what would you say?

A: (laughs) A lot of people say I’m really dry and sassy. But I’m going to say caring and a good listener. I’ll always be there for someone, and I don’t think I have bad relationships with anybody. I could tell countless stories of recruits who are now my best friends.

Q: You originally came to Wabash wanting to study biology and chemistry, but now you’re a history major and a political science minor. Why the change? 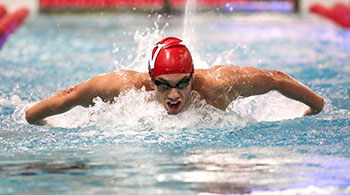 A: I really wanted to be a dentist, but I quickly learned that my love for science was not as big as I had thought. I switched to history because I’ve always liked it, and that’s probably because my family has such a crazy story. And I’m really all about perspective and trying new things. I wanted to learn more about the world and its problems and how people try to cope and solve them.

Q: What is your family’s crazy story?

A: During World War II, my grandpa on my dad’s side still lived in Italy, near Rome. When Benito Mussolini was starting his reign there, he moved to Venezuela and met my grandma. His last name then was Colaiacov, so he added an ‘a’ at the end to make it sound more Spanish. Then my parents met and lived on an island off the coast of Venezuela. Then they moved to Florida so they could have a better life, and now I’m here!

Q: You still have a lot of time left, but what goals do you have for yourself before you graduate?

A: Swimming-wise, I’d like to crack a top-10 list in a lot of events. I was really close last year, so hopefully, I can do that this year. I know my teammates are going to remember me because I was really involved in getting a lot of guys here and helping them transition from home to college, but I still would like to leave an impact on the entire campus. I want to at least show people that it’s okay to have different perspectives and be open to the whole world.