"I Am Because You Are" 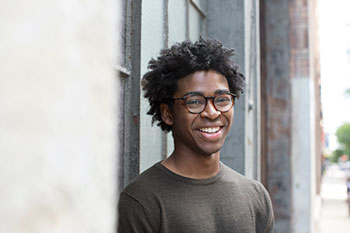 Q: What brought you to Wabash?

A: We used to live near Lathrop Homes in Chicago, which is a housing project on the near Northside. It was set to be torn down in 2006 as part of (former Chicago Mayor Richard M.) Daley’s Plan for Transformation. So my family, we were like, ‘Bump this,’ and we moved to the suburbs. I went to Dwight D. Eisenhower High School and John Duckhorn ’99 was my A.P. U.S. History teacher. He basically said, ‘You’re smart. Apply.’

Q: How would you describe the beginning of your Wabash experience?

A: My high school was majority black and Latino, so to switch here, where it’s majority white, was a culture shock. I always joke that I didn’t really start existing here until junior year. I think I found myself the end of my sophomore year when we went to South Africa for an immersion trip and Ian Artis ’16 and I kind of hit it off. He showed me the ropes and introduced me to the Malcolm X Institute. That’s kind of how I found myself – just through him.

Q: After you felt like you belonged here on campus, how did you find your voice?

A: (laughs) I grew up like a Class A nerd. I used to walk around reading comic books, run to class – I was a nerd. But I would practice talking to people in the mirror. If you speak up in class and start stuttering, you’re not going to get your point across and you’ll get frustrated, which happened to me a lot. I knew how to practice speeches, but I didn’t know how to practice one-on-one interactions or convincing people. I think Wabash really helped me learn how to convince people. You’ve got to know your stuff here.

Q: You’ve also studied abroad in Guatemala, Costa Rica, and Nicaragua, so traveling is something that must be important to you.

A: I didn’t realize how large the world was until I went to South Africa. And then I realized that a lot of the struggles they have there are similar to the struggles we have back home in Chicago. The world is huge, and I want to see it all. 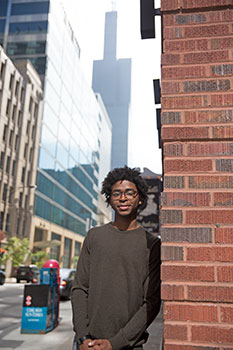 Q: What are some of the other things you’ve learned from your time abroad?

A: It taught me Spanish, and we have a large Latino population in Chicago. I have a better understanding of cultural literacy that will allow me to empathize with people of different cultures. And when I was in Nicaragua, I took a class called Civic Participation within Global and Political Economy. The phrase that professor taught us was, ‘Act local. Think global.’ That’s what I want to do.

Q: What do you mean?

A: I think I can work with comrades and with other people to really change what political and public life means in the city of Chicago, and I hope to encourage others to do the same in their own cities and hometowns.

Q: Where did this passion to make a difference in Chicago come from?

A: From being black. I say that kind of tongue-in-cheek, but really, the fact that I ended up in the suburbs was a policy decision. It was a decision to displace thousands of African-American Chicagoans, and it made me realize that policy is not just numbers and data. It’s real families and real lives. We always have to be cognizant of that. The way that you really affect change isn’t always protesting. I think it’s primarily about changing policies.

Q: Have you been able to do any political work during your time here at Wabash?

A: When I came back from studying abroad in Central America, I was walking to class late one day, and ran into President Hess, and he asked about my experience. I talked to him for a while and then said, ‘I’ll talk to you later. I’m running late for class.’ He told me to tell the professor he made me late and asked about my summer plans. I told him I wanted to work at 270 Strategies in Chicago, which is owned by Jeremy Bird ’00. Well, President Hess ended up connecting us at the dinner after the Celebration of Student Research, which led to a conversation, which led to an interview.

I thought it was going to be more like grassroots – organizing canvasing teams and stuff – but it wasn’t. It was mostly crafting messaging and strategies. It was frustrating in the beginning, but then I realized this was another important feature of doing political engagement and organizing work, and that’s still really helpful.

Q: Is that something you think you may want to do?

A: Actually a friend of mine from Chicago and I are working on a marketing/media engagement startup called Off-Kilter Media, and we just got our first client. 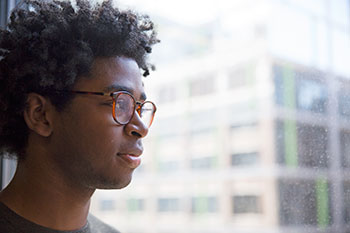 Q: What made you decide to start a company your senior year of college?

A: I decided to do this because, and I don’t think it’s a secret, but my political views are very to the left, very progressive. And I think that we, the progressive left, need to build an infrastructure, a messaging infrastructure, in order to win elections. We can’t go off the same sort of infrastructure of anti-Trump or whatever. We have to build our own positive messaging, sort of like ‘salt the meat before we fry it.’ (laughs) And it’s a decent way to make money.

Q: It sounds like you’re going to have your hands full for a while!

A: It’s worth it. I’m not really an individualist. It’s about the community and what I can do to impact the community positively. “I am because you are.” That’s something I learned in South Africa.