Figuring Out the Next Play

Joel Janak ’19 has been in love with Wabash College football since he was a young boy sitting in the stands with his dad. Throughout middle school and high school, it was his goal to be one of those players in a Wabash jersey making tackles at Hollett Little Giant Stadium. 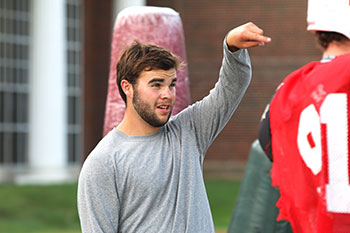 If that was the dream, then injuries were the nightmares that nearly took that dream away.

Joel tore his ACL the summer before his last year of high school, which kept him off the field his entire senior season and created a difficult situation for someone trying to play college football.

“I remember thinking, ‘Damn. This might not happen anymore,’” Joel said. “I thought this goal of mine that I’d had since I was eight was crushed.”

He might not have had any senior highlights, but he definitely had a lot of determination. Through self-recruiting and a lot of physical therapy, then-defensive coordinator BJ Hammer ’01 decided to give Joel a chance.

He saw playing time his freshman year. He was finally living out his dream.

“About a year ago, when we were playing Rose Hulman, I blew out my knee again. I had busted my butt just so I could get to play here. Just when I had really become confident in both knees again, I had to do it all over again.” 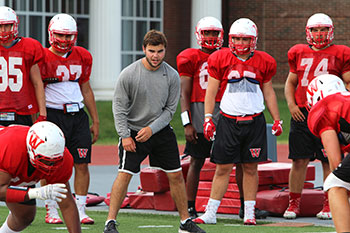 There was no doubt that Joel was headed back to physical therapy. The bigger question was could he return to the football field?

“It was always in the back of my mind that if I’d ever gotten hurt again, I’d consider not playing anymore,” he said. “As much as I love playing football, I value my health more. When I have a family someday, I want to interact and do fun things with them.”

Defensive coordinator Jeff Ramsey told Joel he still had the opportunity to come back if he wanted, but Joel already knew he wouldn’t be playing anymore.

“The second time around, I had to fight a lot of psychological battles,” Joel said. “Football has always been that one passion of mine that I always had. And when that gets taken away from you, it’s tough.

“The cool thing about football, though, is that things can go south really quickly, but you have the very next play to make up for it. And in life, things are going to go south. But you have the opportunity to grow and learn from it and change your fate. And that’s something that going through two significant knee injuries has taught me. Even though I haven’t had a lot of things go my way on the field, that doesn’t mean I can’t change my fate for the future.” 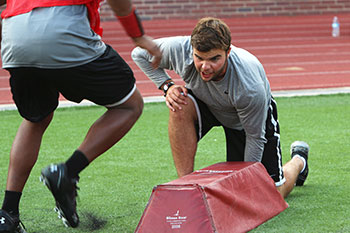 Joel took the time to think about his injury as an opportunity for his dream to evolve rather than die and is now an assistant defensive line coach for Wabash.

“I could be sitting at home doing nothing, but the fact that I have the opportunity to be involved and help out each and every day is a cool thing. There are not a lot of guys in my position with the opportunity to coach college football.”

Out on the practice field, he runs drills on his own, works directly with players, and makes corrections when needed.

Coaching, he says, has helped him find the confidence he lost when he stopped playing. He has his work cut out for him as a student assistant coach, but still has the determination that got him to Wabash in the first place.

“I’ve always been undersized. I’ve never been the fastest, never been the strongest. As a player, I knew I had to outwork everybody if I was ever going to see the field,” he said. “Get up early, put in the work. Stay after, put in the work. Watch a lot of film to better myself. I’ve taken that from the field into coaching. I’m a 21-year-old student coach, and a lot of our coaches have been coaching for years. I have to put in a lot of work to make sure I’m on the same page as them, and there’s definitely been a learning curve.”

One thing that has been helpful for Joel as he figures out his new Wabash football role is that his little brother, Josh, is navigating a new position on the team as well.

Josh Janak ’21 came to Wabash as an offensive lineman but is now playing defensive line under the direction of his older brother. 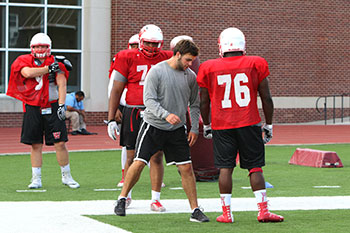 “We’ve both had to learn a lot together, which has been cool,” Joel said. “He definitely uses me as a resource, someone he can come to if he has questions. It’s not every day you get to coach your younger brother, and I get to coach him for the next two years.”

Looking back on the obstacles he’s endured, Joel considers himself a better man for all of it. Coaching is not a fallback plan. It is a career advantage.

“I want to have a career in football in some capacity, and I want to make sure I don’t leave any stone unturned,” Joel said. “If I find something I like, I want to be able to take it and run with it, and having this experience now will only help me in those endeavors.”

It might be a long shot, or it could be another dream he’ll one day achieve.